US Trade War with China 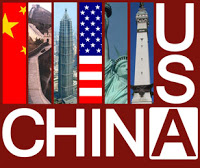 Facebook
Twitter
Pinterest
WhatsApp
The United States is in a trade war with the People’s Republic of China, and it’s the oddest trade war/exchange rate war I’ve seen — with a pantheon of self-interested characters.

“According to the Chinese Ministry of Commerce, the latest statistics show that, in just two weeks from October 1 to 15, 2010, the U.S. Department of Commerce developed as many as 24 trade remedies and related cases involving China. Nine of those incidents occurred in just four days from October 12 to 15. Since September, the U.S. has launched seven “section-337” investigations and one “section-301” investigation, involving products such as solar lights, LCD monitors, and printer cartridges. If we look at just the famous case of special protection given to U.S.-made tires, we can easily see that, indeed, the U.S. has launched a trade war with China. Whether China wants it or not, most of the world’s media can see it clearly.” (Quishi Journal Dec. 12, 2010 – CCCPC Pub)
The Chinese feel that anytime an investigation is made public, it’s a direct assault on their reputation and credibility. It’s simply how they view the world. Things are viewed differently in the West where the Obama Administration is being accused as being insufficiently transparent. In China the government tries very hard to be mysterious and opaque. It’s not, but they work at it.
It’s equally odd that the Chinese would resurrect Chairman Mao in this late date when China is the world’s largest capitalist country – operating under a single-party communist shell. The Chinese Central Government has thrown down the gauntlet by reminding everyone of Mao’s “Cast Away Illusions; Prepare for Struggle” speech. (August 14, 1949) where he said, Our wishes to persuade the imperialists and those who are against China to be kindhearted and repent are fruitless and will never come to pass. The only way is to organize forces to fight against them. One fundamental principle that we must follow is the strategy, “If friends come, treat them with wine; if jackals come, we have shotguns for them.”
One can presume that the Jackals then as now, refer primarily to the United States. (home of the running dog, imperialist, compradores of the pseudo-intelligencia, etc.) When I last visited Mao’s tomb in Beijing (and I’ve been there several times), people were selling Mao golf balls, Mao hats, Mao fans, Mao sandals, etc. In 1970 you would have been sentenced to a reeducation camp for life for even possessing such items. Mao in China is a bit of a dual personality – there when you need to stir up patriotic fervor, but mostly forgotten.  (For more on this in a general sense, see Red China Blues: My Long March from Mao to Now

, by Jan Wong. When I met Jan and discussed her book, she spoke of the same thing.)
China holds VAST US currency reserves. As they pulled out of the grip of communism and replaced collectivism with capitalism, China saw US Dollars as the thing to hoard. Today the Federal Reserve is printing $100 billion/month to ‘foster economic recovery and job creation’. The Chinese are panicked because it devalues the dollars they’re holding. They consider this a salvo aimed at them. Truth be told, it is. At least in part.
Quietly and secretly the Chinese are selling off US Treasury notes at discounted rates in the hopes of recouping some of their losses before the dollar slides too far. They don’t want to be seen as dumping US Treasuries because that would mean that they made a mistake when they bought them in the first place and nobody wants to suffer that sort of loss of face/prestige in a public setting. You have to be Asian to appreciate this. 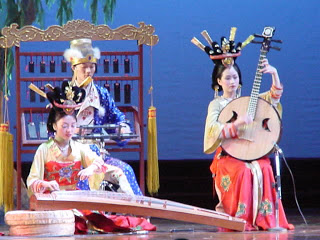 classic Chinese theater
Other nations won’t follow China’s lead in a war on the US Dollar, and this is a problem for China in their efforts to retaliate against Uncle Sam and not buy US Treasuries. Other than China; Japan, Saudi Arabia, the UK, and India hold the most dollars in reserve. None of those countries is disposed to break from the US since it’s more or less the only game on the planet at the moment with the threat to the future of the Euro still hanging in the balance.
So China’s options are all domestic: They can publicly sell their US Dollars (at a discount) to devalue US Dollars but that is more or less like a snake eating its tail since they hold so much US Currency that by doing that, they beggar themselves. Since the US is over-printing dollars, the US may do it for them, and they’re in a bind no matter how they deal with it.
China has embarked on a plan to buy the debt of other countries instead of US Dollars to promote friendship with those countries and to teach the US a lesson. From a Chinese perspective, their foreign currency reserves will no longer be the “meat of the Tang-dynasty monk”**. Well and good so long as Germany doesn’t pull out of the EU.
The war continues and it is interesting to watch.
** A proverb where if you eat the meat of a this particular dead monk, it will sustain your life forever.