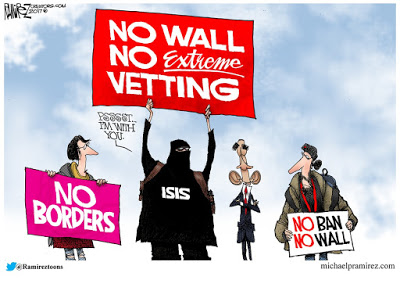 Facebook
Twitter
Pinterest
WhatsApp
I’ve been quiet on the subject of the Trump Administration’s executive order, requiring a temporary ban on people traveling from 7 countries where vetting (within those countries) is inadequate to identify terrorists. In the case of the countries in question, travel documents can be had in any name you decide on at the moment for a small fee. (In the case of Iran, it’s a state-sponsor of terrorism and the nation will provide documentation to terrorists) Thus the Obama Administration and Congress stated concerns two years ago but did nothing. The Trump Administration wanted to halt travel to get its ducks in a row and to try and decide how to manage travelers from savage lands.

It’s true that the Trump Administration did a less than perfect job selling the executive order to the shrill, progressive, corrupt, elite, smug mainstream media who reacted with their usual hysteria.
Before we move to the federal bench in Seattle or the 9th DCA, we need to review the law — because you need to rule on these things based on what the order says, not on what Rudy Giuliani or Donald Trump said a year ago on a campaign stop.

Title 8 United States Code, section 1182(f), of the Immigration and Nationality Act, is entitled “Suspension of Entry or Imposition of Restrictions by President” and states:
Whenever the President finds that the entry of any aliens or of any class of aliens into the United States would be detrimental to the interests of the United States, he may by proclamation, and for such period as he shall deem necessary, suspend the entry of all aliens or any class of aliens as immigrants or nonimmigrants, or impose on the entry of aliens any restrictions he may deem to be appropriate.

My eight year old grandchildren could read this, interpret it and would gather and impart the meaning better than the learned members of the judiciary were able to. Enough said on that. Ask a second grader if you want the right answer.
The progressive left and their Hollywood spokespeople have retreated into a paranoid fantasy realm where their reaction is nothing short of clinical delusion. Locking them up and treating them might help. They hire thugs to break things up in a parody of kristallnacht. We’ve seen this before. We will see more of it. 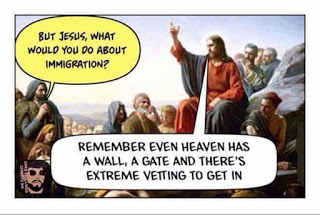 President Trump promised to take other actions in the coming week to fix the problem. The left will riot. They will close airports, they will march. So what? I begin my international travel in Tijuana now.

It’s important  that the Trump Administration think harder about selling the message. That much is clear. That what they did was legal and proper, is beyond all doubt, no matter how the hysterical, plotting, corrupt, progressive judges ruled.