The Valley of Death 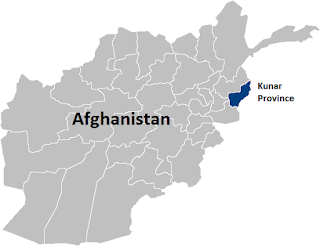 “Daesh (the Islamic State) took complete control of the Korengal Valley,” said Abdul Latif Fazly, a member of Kunar provincial council, referring to the militant group by its Arabic name.

Fazly said hundreds of Islamic State fighters had gathered from Kunar, as well as neighboring Nangarhar, where its presence is strongest, to attack the valley and push back the Taliban.

US Army soldiers and Marines fought a succession of battles to maintain government control of the Korengal Valley between October 2004 and April 2010.
In 2010, the US command decided to abandon the valley and withdrew US forces. Fifty-four US soldiers and Marines were killed in the fighting in what some called the valley of death.
The Taliban and the Korengalis took over after the US forces withdrew. This week, the Islamic State drove out the Taliban and expanded their operating area.
In 2008, I was sent to Kunar Province and to the Korengal Valley as part of a team of “old men” who spent time there bad old days when the Soviets were running the place. They wanted a “fresh perspective”,  in the hope that we would come up with a more positive view of the situation. The report remains classified to the best of my knowledge.
America lost a lot of blood and treasure holding the Korengal Valley. Some men who returned home from intense fighting will never be the same. There were suicides – after their return and, naturally, that is not considered in the body count. The campaign to hold the valley reminded me very much of Viet Nam. If you are going to ask me what those fifty-four Americans died for – don’t. Don’t ask because the answer is ugly. If blame is to be assigned, look at the two commanders-in-chief, and Congress. The military carries out orders. It does not set policy. Intelligence agencies and the military have an advisory function that is almost always ignored.
The sorts of Valley of Death campaigns are only valid to me if the children of a president.vice president and Congress are sent in with the rest of the grunts.
Should America keep troops in Afghanistan (at great cost)? If you’ve followed my blog in the past, you know that one of my sons-in-law who served in the navy came back from there disabled and now works at a Naval Engineering Laboratory (NAVSEA). He’s one of the lucky ones, if you can call that lucky. The Navy came to its senses when it did a head count and found that they were losing a staggering 26 +/- Afghan veterans per day to suicide and he was one of the men that they made an extra effort to help.
Is an endless war in a God forsaken place like that worth it? President Trump doesn’t think so and the progressives want to keep the war rolling.