The Mouse that Roared, etc. 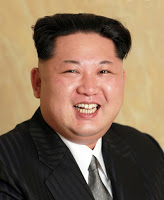 Those lovable Norks are at it again. North Korea is suspected of carrying out its fifth test of a nuclear bomb, after a magnitude 5.3 seismic event was detected close to the test site at Punggye-ri.
The US Geological Survey, which monitors global seismic activity, said Friday morning’s tremor had been detected in that area and was caused by “an explosion”.
If confirmed, this would be the North’s fifth nuclear test. The last test was in January. This would be the first time the North has performed two detonations in a single year.
North Korea has not yet confirmed that it conducted a test. However, the test occurred on the anniversary of the founding of the Democratic People’s Republic of Korea, 9 September. That suggests it was timed to provide a sensational backdrop for North Korean Founder’s Day.
Increased activity and possible preparations have been detected regularly at the Punggye-ri site since April. Various reports have trickled in that they were getting ready to light one off.

On 8 September the North Korean Foreign Ministry published a statement demanding that US forces must withdraw from South Korea. On 6 September, Rodong Sinmun, the party daily, published a commentary that asserted that North Korea is determined to continue to strengthen its nuclear deterrent. Its concluding paragraph recites the North’s standard policy positions.

“Correctly recognizing the strategic position of our Republic — which has proudly joined the top ranks of nuclear powers — and the general trend of the times, the United States must withdraw its anachronistic hostile policy toward North Korea, replace the Armistice Agreement with a peace agreement, and withdraw its forces of aggression and war equipment from South Korea at once.”

Yada-yada-yada. The Norks are starving to death but they build nuclear weapons.

The militant Norks and the Chinese are working hard to push Japan to build its own nuclear arsenal. America de-fanged Japan during World War 2, but the Japanese are on the move now. They have a strongly revised history being taught in school and if I was the Norks, I’d worry more about the Japanese than the US. Because quite frankly, the Japs don’t give a rat’s ass about slaughtering people who piss them off. Neither does the US, to the point, but the Japanese did a number on Korea half a decade ago (and the South Koreans remember keenly) and if they respond to the Norks, it’s not going to be kind and gentle. Or at least that’s how I see it. There is a tipping point with all of the missiles that the Norks shoot toward Japan, most of which don’t work right. One day, one of those missiles will land on Japanese soil and kill a few people. Then the shit will hit the fan.

Dear Leader (Kim Jong Un) is a murderous child – but America is toying with putting Hillary Clinton in the White House, so I don’t know that we’re much smarter than the Norks.

Meanwhile in Turkey, the purge continues. On 8 September, Turkey’s education ministry said 11,285 teachers had been suspended and were on paid leave pending an investigation. The state-run Anadolu news agency said they were suspected of activities “in support of the separatist terrorist organization and its affiliates.”

It also said the number was meant to grow to 14,000, after an investigation carried out with the cooperation of local governors’ offices.
Pro-government Turkish press reported that the suspensions affect less than 2% of the 850,000 teachers. However, the BBC reported that in July 15,200 education ministry officials lost their jobs and 21,000 private school teachers had their licenses revoked.

Was the aborted junta orchestrated by the sitting Turkish government or were the plotters just that incompetent? The short answer is that I don’t know. But it’s working out well the purgers. Is Hillary Clinton taking notes? Maybe.

Syrian Kurdish groups and their allies will approve a constitution for a new system of government in northern Syria next month, a top Kurdish politician said, defying a Turkish incursion aimed at curbing Kurdish influence in the area.

The interview with Yousef provides the most recent update on the status of the Syrian Kurdish regional autonomy plan. It appears to be on schedule, consistent with earlier announcements about the timing of the program.
The Syrian Kurds show no indications of abandoning the areas they captured from the Islamic State, in deference to the Turks. Those areas include the town of Manbij. The Turks remain adamant that they – not the Syrian government – will not permit the Kurds to form a political entity along the border. The Turkish-backed Syrian opposition is determined to take Manbij.
Clashes between Syrian Kurdish forces and Turkish and Turkish-backed Syrian proxies are unavoidable, unless outside powers intervene effectively.

I don’t know where the Russians stand on this. Barack made the US largely irrelevant in this situation through constant ham-handed bungling. SEC STATE John Kerry has been flying here and there and “talking at” people, who are polite enough to sit there and listen. That’s essentially America’s cracker in the soup.

America should be working to set up safe zones for refugees, and taking on a role like that one while the Turks and Kurds slug it out.

Barack wants Assad out but the Russians want him in – largely because America wants him out. The Russians and Chinese consider Barack to be an annoying and indecisive monkey. The Philippines consider him a whore-son. That’s just how it is. I think that they’re all looking closely to see whether America elects a crooked woman (scorned wife of Slick Willy) or a real estate magnate to manage its interests. The community organizer from Chicago was a complete bust.