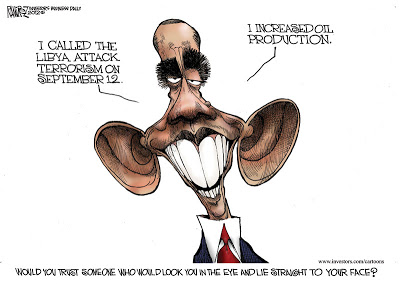 Facebook
Twitter
Pinterest
WhatsApp
What do we now know about what the US Administration knew about the attack on the US Consulate in Benghazi in real time?

CBS News has been told that, hours after the attack began, an unmanned Predator drone was sent over the U.S. mission in Benghazi, and that the drone and other reconnaissance aircraft apparently observed the final hours of the protracted battle.

The State Department, White House and Pentagon declined to say what military options were available. A White House official told CBS News that, at the start of the attack, Chairman of the Joint Chiefs Martin Dempsey and Defense Secretary Leon Panetta “looked at available options, and the ones we exercised had our military forces arrive in less than 24 hours, well ahead of timelines laid out in established policies.” (CBS News)

Yes, our USGOV watched the attack unfold in real time. They watched Chris Stevens dragged from the safe house, and soddomized in the streets of Benghazi. The watched his carcass dragged around the streets by the terrorists who killed him. Isn’t technology…interesting?
You have to give credit to CBS to actually cover a story that makes President Obama look bad. In deference to this, CBS Reporter Sharyl Atkisson was also at the forefront of the Operation Fast and Furious Scandal.
A review of the timeline and who said what, when:

The New York Times reported that 166 pages of internal State Department documents released by GOP congressmen showed that now-murdered Ambassador Christopher Stevens and other U.S. officials had repeatedly warned that security was deteriorating in Benghazi and they pleaded for additional protection. The Libyan government, he wrote on Sept. 11, was “too weak to keep the country secured.” Stevens’ alarms went ignored.
After Stevens’s brutal death that night, the CIA station chief in Libya reported to Washington within 24 hours that the attack was carried out by terrorists, not spontaneous protestors, according to U.S. officials who told the Associated Press.
That isn’t what the Obama administration spent five weeks telling the American people.
The White House attempted ferociously to convince U.S. voters that the lethal Sept. 11 attack on the U.S. consulate in Benghazi was nothing more than a spontaneous demonstration that got out of hand and as such, something the government could not control.
Secretary of State Hillary Clinton was quick to praise the Libyan crowds for somehow bringing the mortally wounded or perhaps dead (no one knows yet) U.S. envoy to a Benghazi hospital on the night he was killed, suggesting there was good will all around.
That was blown apart by video footage of Stevens in a considerably less benign picture with mobs snapping cell phone photos as souvenirs while carrying his body away.
It didn’t stop there. United Nations ambassador Susan Rice made the rounds on five Sunday talk shows on Sept. 16, assuring with certitude that the death of the ambassador and three other Americans was nothing more than mobs incensed by an offensive YouTube trailer.