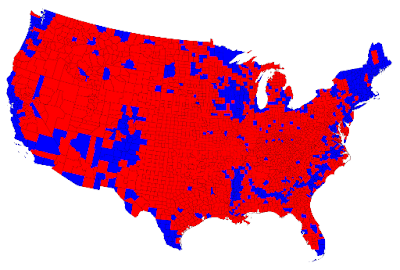 The areas in red have a very high concentration of firearms in private hands. The blue areas have firearms in private hands too, but the concentration isn’t as high. There are a number of freaks in the mainstream media and legacy has-beens like ABC’s Sam Donaldson who feel that “fly over country” doesn’t matter. It’s true that the urban concentrations voted for Barack Obama. He won. Good for him. But there is a vast group of people who feel that the Constitution entitles them to own firearms. Most of them live in the part represented as ‘red’ on the map.
Historical Precedence:

“And how we burned in the camps later, thinking: What would things have been like if every Security operative, when he went out at night to make an arrest, had been uncertain whether he would return alive and had to say good-bye to his family? Or if, during periods of mass arrests, as for example in Leningrad, when they arrested a quarter of the entire city, people had not simply sat there in their lairs, paling with terror at every bang of the downstairs door and at every step on the staircase, but had understood they had nothing left to lose and had boldly set up in the downstairs hall an ambush of half a dozen people with axes, hammers, pokers, or whatever else was at hand?”

“The Organs (government entities) would very quickly have suffered a shortage of officers and transport and, notwithstanding all of Stalin’s thirst, the cursed machine would have ground to a halt! If…if…We didn’t love freedom enough. And even more – we had no awareness of the real situation…. We purely and simply deserved everything that happened afterward.” — Aleksandr I. Solzhenitsyn (The Gulag Archipelago)

Senator Feinstein – Lead the Way
Senator Dianne Feinstein (D-CA) would like to see firearms confiscated. I know she doesn’t go that far in public, but privately, that would really throw sunshine all over her. I offer Senator Feinstein a challenge. If you want them, why don’t you lead the door-to-door charge to take them. There are a lot of red counties in California. Pick one and get started. Take Senator Barbara Boxer (D-CA) with you in your crusade. Stand on your high ground like Ghandi and disarm your own state peacefully — but in person. Don’t send some police officer to do your dirty work. Show us what you’re made of.
President Obama, Firearms Sales Superstar
Why is Barack H. Obama the greatest firearms and ammunition salesman in history? Every time he or his minions declare that they want to restrict firearms ownership, stores can’t restock firearms quickly enough. Ammunition becomes scarce because people buy up every last round. It happened when Barack Obama took office in 2009 and it’s happening again. I know that to Colt, Ruger, Browning and the other firearms manufacturers, Obama and his ilk are heroes. They keep full employment in the gun and ammo businesses.
Review the Map Another Way
Look at that map once again, and ask yourself why so many people want to own firearms. It’s clearly not to commit crimes. If I was going to overlay a high crime map on the country, the highest crime areas would be BLUE not RED. I understand that the inconvenient truth irks our political elite.