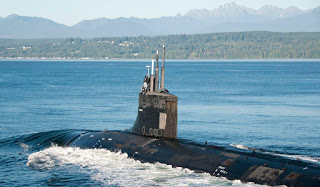 Facebook
Twitter
Pinterest
WhatsApp
Has the US already recovered the Burevestnik nuclear powered and armed Russian cruise missile that came down in the Barents Sea in 2017?
I can hardly speculate because I know very little of such things, but that’s what blogging is all about…isn’t it?
The real question is HOW MANY missiles are the Russians missing? And who will find them all first?

CNBC was first to report the Russian expedition, citing unnamed U.S. government sources with knowledge of an American intelligence report on the matter, on Aug. 21, 2018. These individuals said that the Kremlin would dispatch three unspecified ships, including one specially configured to recover the missile’s nuclear reactor, but said there was no set timeline for when the operation would begin or how long it might last.
Russia test-fired four Burevestniks in total between September 2017 and February 2018, according to the new information. The longest test flight reportedly lasted over two minutes and saw the weapon travel a total of 22 miles, while the shortest experiment saw the missile fail within seconds, but it still managed to cover a distance of five miles. The missile reportedly uses a nuclear reactor to power its propulsion system, giving it theoretically unlimited range.
The Russians have otherwise been very tight-lipped about the design (read more about it here). So, it’s not surprising that they would want to recover any wrecks both to prevent foreign intelligence services from getting their hands on it and to gather more information for their test program.
The Yantar is said to be among those ships engaged in the search. Officially an “oceanographic research vessel,” this spy ship has specialized equipment that can reportedly tap or cut submarine cables and investigate and retrieve objects from depths of up to 18,000 feet.

In 2017, the vessel reportedly sailed off the coast of Syria to recover the remnants of two fighter jets, a Su-33 and a Mig-29KR, that crashed into the Mediterranean Sea during operations from Russia’s aircraft carrier Kuznetsov. In that case, the goal was also, at least in part, to make sure other countries could not retrieve the wrecks for their own purposes.