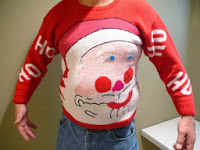 * Today is “Boxing Day”. Broken down gift boxes, ribbon and wrapping paper have been turned magically into landfill. (For the most part, it’s not designated as ‘recycling’.)

* Relatives are exchanging the garish sweater that you bought for them at WalMart for cash. And they’ll find out that you bought it on sale from the rummage table for $5.00. It will be on the rummage table again next year and the drama will repeat in another family until the “unwanted sweater” is given to one with hopelessly bad taste who wears it in the mistaken notion that it makes him look cool.
NORTH KOREA EXECUTES DENNIS RODMAN 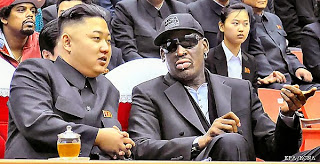 FLASH – BREAKING NEWS: Despite many claims to the contrary, Kim Jong Un and the Gangnam Style guy are not, in fact, one in the same person.
I suspect that Rodman dumped his chubby, gay lover, Kim Jong Un and it didn’t go over well (love is a battlefield). The Duffleblog had a different theory:

In an unusually strongly-worded release by North Korean standards, the reclusive state accused Rodman of being “despicable human scum” and “worse than a dog,” which is notable since dogs are generally treated better than people in North Korea.

The downfall for the flamboyant Rodman was stunning, given his friendship with Kim Jong Un, the chubby, pre-pubescent leader of North Korea. Rodman was accused of “hideous crimes such as attempting to overthrow the state by all sorts of intrigues and despicable methods with a wild ambition to grab the supreme power of our party and our state.”

Rodman reportedly beat Kim in a game of horse shortly before his execution, Duffel Blog has learned.

The human freakshow that was Rodman was accused at his trial of graft, gambling and womanizing, and his autobiography was reportedly admitted into evidence. Rodman’s confession apparently included the fact that Madonna was kind of “a dead lay.”

I really thought that this performance was by Kim Jong Un…I guess not. What a let-down.

TODAY,  IS THE WORST DAY OF THE YEAR
TO HAVE A BIRTHDAY
BEANS – NOT FOR CONSUMPTION IN SPACE