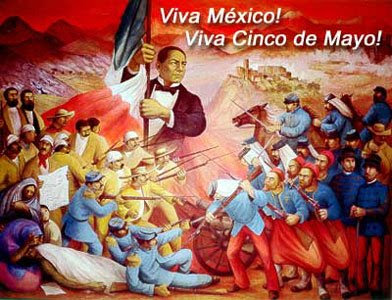 All across the American southwest and in Mexico, people celebrate Cinco de Mayo (meaning the fifth of May).  For years I celebrated (a party is a party) without understanding precisely what the Mexican people were celebrating.

Context and Precedence:
In 1861, Mexico was in debt to the major European powers: Spain, France and Great Britain and Mexico defaulted on its payments. Under the provisions of the Treaty of London (October 31, 1861), the creditors combined to try and recoup their losses.
The Spanish, French and British fleets arrived in early January, 1862. A monarchy was instituted in Mexico under Emperor Maximillian Hapsburg (Austria) and his wife, Charlotte (Belgium), supported by French troops. The creditors hoped to get the payments started by exploiting gold mines in Mexico.
The Battle:
After a string of military victories by the allied forces, the British and Spanish withdrew on April 24, 1862, leaving the French to complete the conquest of Mexico. The first major French engagement with the Mexican forces took place on May 5, 1862 (Cinco de Mayo). The French force (combined arms: cavalry, infantry and artillery) attacked the Mexican Regular Army at Alcuzingo Pass on April 28 and mauled them. The Mexicans retreated to the City of Puebla where two forts protected the approaches to the city. The forts held and the Mexicans (who outnumbered the French roughly 3:1) counterattacked. The French were thrown back with heavy losses and the Mexicans returned to their fortifications rather than following up on the success.
Aftermath:
Following their defeat at the battle of Puebla, the French defeated the Mexican forces under Zaragoza and took Mexico City on June 7, 1863. By 1865, just about all of Mexico was  under French rule. So while the Mexican army won at Puebla, they lost the war.