A Moment in History 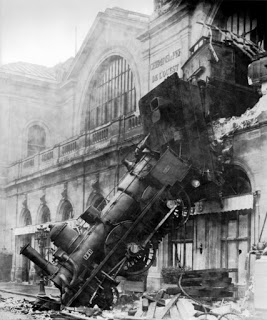 At 4pm exactly, being five minutes late, the train n°56 from Granville arrived in the Montparnasse train station in Paris at a speed surpassing 40km/h – 25mph, in part due to the pilot and mechanic trying to make up lost time and also maybe from a faulty air brake, causing panic in the station.
The locomotive pulverized the three wooden buffers -ejecting the pilot (engineer) from the cabin, ran through the 30m long platform’s end, going through a newspaper kiosk before piercing the 60cm thick stone wall and the ledge behind it and falling ten meters below on a tramway stop of the place de Rennes.
A newspaper seller was crushed by falling masonry and parts of the engine (not his lucky day), and was the only casualty of the accident – by a stroke of luck the tramway was about to leave when the horses, scared by the locomotive’s commotion, ran away farther down the place with the passengers safe inside. 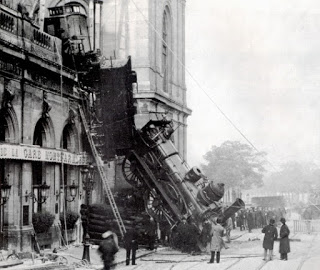 Seine’s police prefect Louis Lépine mobilized a hundred policemen and twenty more on horses to manage the accident’s scene, with the direct aftermath seeing considerable attention from both the press and regular folks flocking the train station to take a peek at the fantastic sight, going so far as to buy tickets to nearby destinations for a few Francs to get access to the platform where the train stayed for two days for the police investigation.
The locomotive was removed after two failed attempt with a 250 ton winch, and was found to have suffered little damage – unlike the train station.
The pilot (engineer), mechanic and guards received little to no penalty, having been found to be overworked at the moment of the incident.