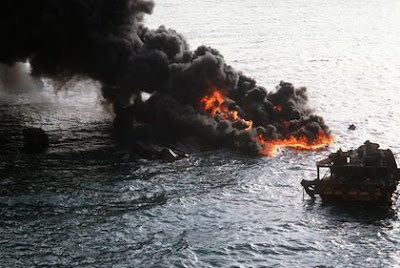 This oil platform in the Persian Gulf was occupied by Iraqi armed forces at the same time as the main combat force invaded Kuwait in 1991. They mounted 37mm anti-aircraft guns on it to protect it from the forces of the Great Satan.

The attack began before dawn with fire suppression from US Marine Corps Cobra gunships. When SEAL Team 5 Alpha Platoon hit the platform from combat rubber raiding craft and soon after, the Iraqi Army surrendered. The SEALs were most unhappy that the Iraqis surrendered rather than providing acceptable targets for the operators who wanted trigger time. It’s hard to shoot people who are slobbering, crying and kissing your boots.
Once the Iraqi prisoners were evacuated by helicopter we called in F-18 Hornets and they rendered the platform incapable of sustaining enemy combat forces. The platform had belonged to the Islamic Republic of Iran before the Iraqi Army raided and over-ran it… Oh well. 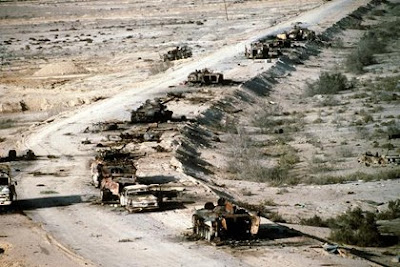 This is the result of SEAL operators from Team Five, Alpha Platoon calling in fire support on a company of Iraqi armor that was moving south toward Khafji, Saudi Arabia, January 30, 1991. The SEALS were based at Ras al Mishab, about thirty miles south of Khafji. We took this photo on a battle damage assessment fly-over about three days later in early February. It’s amazing what a couple A-10 Warthogs can do to a platoon of Russian-made armor. Based on what the guys said who called in the aircraft, it was over in less than five minutes after the Warthogs arrived and started working the column over.
The Russians were dismayed that their equipment fared so poorly against US and British equipment and tactics. (sorry, Ivan – think how much worse it would have been if you tried to push through the Fulda Gap into West Germany)