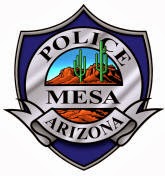 (Fox-Phoenix) He’s not the type of armed man on campus you’d expect parents to be concerned about — but apparently a police officer dropping off his daughter at school was just too scary for some parents in Mesa.

And the school principal actually called that officer to ask him not to wear his uniform on campus ever again.

The officer, who works for the Coolidge Police Department, is a parent of a kid that goes to Entz Elementary School in Mesa.

The request made by school officials to not wear his uniform and gun on campus shocked and upset a lot of people.

All Scott Urkov did was drop his daughter off at Entz Elementary School. Little did he know that what he was wearing that day would lead to a call from the principal.

The Mesa School District needs to require that Gregory S. Reid, the school principal of Entz Elementary School go on  40 hours of police ride alongs. If he doesn’t, maybe Reid could find a government job in the Obama Administration pimping ObamaCare or some other progressive goofball program.
I recall a situation in California many years ago when the infamous California Supreme Court Justice, Rose Bird was asked why people had so many locks on their doors. Bird said that it was because they feared the police. That is the problem with the deluded “progressive” mind set.
And who does this petty principal believe will come to save his wide rear end if something bad happens on campus? You can reach Principal Reid at 480-472-7300.