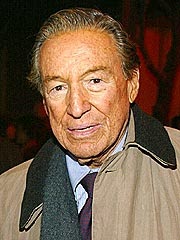 I first met him in the restaurant of the Four Seasons Hotel in Newport Beach in 1987. He was there with his producer, Marion Goldin, eating breakfast. He stood when I walked up, “Hi, I’m Mike Wallace.”

He met and interviewed almost everybody who made a difference in the last half of the Twentieth Century. Unlike many of his contemporaries, he didn’t soft peddle the issues. He was known for asking hard questions and for taking people on. For many on the planet, the definition of horror was to have Mike Wallace walk into your office with a CBS News film crew, camera rolling, and to ask you what the heck you’re up to. Yes, fifty million Americans will watch your answer on prime time, Sunday night.
During my life I’ve met and had long conversations with interesting people other than Mike Wallace. The late Archbishop Chistodulos, Patriarch of Athens, Edward Teller, father of the hydrogen bomb and a long list of various politicians from many nations, cartel kingpins, spies, mercenaries, etc.
Mike Wallace, known as the Hitler of the media, is not loved by many. He was the sharp point of television journalism’s spear.
What one who met him as I did but didn’t know him intimately couldn’t know is that Mr. Wallace suffered from chronic depression. In an interview he revealed, “At first I couldn’t sleep, then I couldn’t eat. I felt hopeless and I just couldn’t cope and then I just lost all perspective on things. You know, you become crazy. I had done a story for 60 Minutes on depression but I had no idea that I was now experiencing it. Finally, I collapsed and just went to bed” (Source: CBS interview).
I found him interesting because his perspective was based on FIRST HAND KNOWLEDGE. He saw, he heard, and he was empowered by his position to question—anyone he wanted to. I first met him in 1987 and at the time asked about his interactions with Yasser Arafat. His insight was profound. I met Arafat some eleven years later in China and in an odd turn of events, had lunch with him. We were both staying at the Diaoyutai State Guest House in Beijing. I ran into Arafat there as we were staying in adjacent bungalows. The food was horrible and he invited me out to lunch. Armed with Mike Wallace’s insight, the lunch was far more interesting that it would have been otherwise.
He’s a private man, who loves what he does. I’m sure he’s a difficult man in many circumstances and situations. As for me, I found him to be profoundly interesting.