Who is the Biggest Ass? 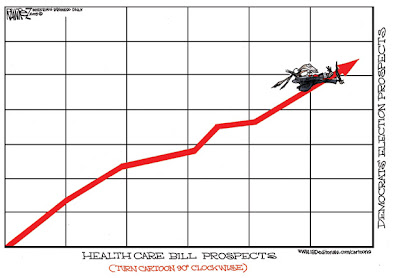 The Democratic majority holds sway in the Senate, House of Representatives and Barack Hussein Obama’s Administration over the Executive Branch of Government. Will the Healthcare Bill sink them?

Or will it be Cap and Trade – the environmental mandate built on the fiction of Global Warming? For any of you who are following the Copenhagen Conference (where Barack Hussein Obama pledged America would follow lock step with the emerging nations who are more or less exempt from the requirements to halt carbon emissions), the United Nations summit was promoted as a serious effort to mitigate climate change. I was shocked to see the summit co-sponsored by Barack Hussein Obama turn into an attack on capitalism.

Venezuela’s Hugo Chavez, Iran’s Mahmoud Ahmadinejad and Zimbabwe’s Robert Mugabe spoke in Copenhagen and their asinine remarks were cheered and applauded by attendees who seemed to think they were in the presence of great men.  Does America get the message too?

Hugo Chavez was celebrated as if he were a popularly elected president who has led his country toward greater freedom and prosperity instead of a socialist who rigged his election to be president for life, crushed civil liberties and wrecked his nation’s economy.  “President Chavez brought the house down,” according to newspaper The Australian, when he addressed the U.N. Climate Change Conference on Wednesday. “When he said there was a ‘silent and terrible ghost in the room’ and that ghost was called capitalism, the applause was deafening.” Socialism, Chavez told the fawning audience, is “the way to save the planet” while “the destructive model of capitalism is the eradication of life.” And: “Capitalism is the road to hell. … Let’s fight against capitalism and make it obey us.”

Bolivia’s President Evo Morales, a pal of Chavez, Ahmadinejad and Fidel Castro and the first fully “indigenous” head of state in Bolivia. Morales set the table for Chavez, declaring the real cause of climate change to be “the capitalist system.”–“If we want to save the earth,” he said, “then we must end that economic model.” This man, a socialist who also fixed his election and consolidated his power, proposed an “international climate court of justice to prosecute countries for climate ‘crimes.'”

Robert Mugabe, who has beaten, tortured and killed his opponents and has been sanctioned for human-rights abuses, held forth on the anti-capitalist theme. He scolded the “capitalist gods of carbon” who “burp and belch their dangerous emissions,” leaving “the lesser mortals of the developing sphere” to “gasp and sink and eventually die.”  The gasping, sinking and dying who Mugabe is most familiar with are within his own country. Tens of thousands have been killed by the poverty, cholera, famine and outright murder brought on by his socialist policies that ruined a once-thriving economy. (IBD)

The donkeys/asses who currently run the country are trying to run  it on the rocks in any direction possible and they are an absurd farce, entertaining America’s enemies. The Biggest Ass Award has to be presented to Nobel Laureate, Barack Hussein Obama for his efforts to turn prosperous, happy America into a utopian socialist morass.