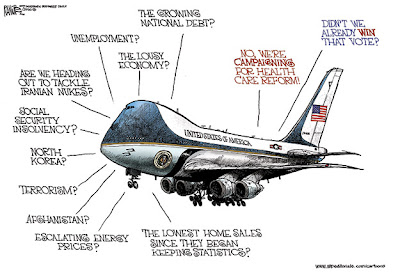 Today, most opinion polls agree that fewer than 20% of the voters approve of the job Congress is doing. Why the failing grades? Part of it is the broad public reaction to the spectacle the lawmakers have made of themselves these past 15 months.

barack hussein obama, notorious national socialist, joined at the hip with the Democratic majority in Congress has nationalized/socialized:

Student Loans
General Motors
The Banking Industry
The Healthcare Industry
The Insurance Underwriting Industry
Well over 30% of what was private industry in 2008 is now owned by the Federal Government. This is the same Federal Government who brought you failure after failure to effectively financially manage literally everything it has touched from the post office to social security.
Did this run of nationalizing generate any sort of private sector job creation? No, in fact it only made things worse. Don’t point to an increase of government jobs as anything hopeful. That increase is fueled on the back of increased government debt heaped on the back of American taxpayers.
The Democrats made a Faustian deal with barack hussein obama, hoping that his popularity would prop them up, but it hasn’t worked. And sadly for the Democrats and for the Republicans, both need the 25-30% block represented by independent voters to win a national election at a time when, by any measurement, the prestige of the legislative branch has sunk to a historic low. And we’ll see whether the 2010 elections bring a change from the disastrous 2008 elections that put the Democrats in power.