In the early 1960’s a former OSS operative and mercenary Mitchell WerBell III set up a company dedicated to the development of cheap and efficient sound suppressors for automatic weapons.

WerBell had joined the US Army immediately after the Second World War began, serving briefly as a second lieutenant with the Signal Corps and then volunteering to join the newly formed Office of Strategic Services (OSS) in 1942. The OSS was technically part of the US Army, so it was more of an assignment change than a change in service branch.

WerBell became an expert in guerrilla warfare fighting in Manchuria, Burma and Indochina during which time he became familiar with the suppressed firearms often used during clandestine missions. After the OSS was disbanded in September 1945, WerBell returned to the regular army as a captain but didn’t last long. He resigned, finding the routine of commanding an infantry company dull. There is a vast difference between peacetime and wartime military.

During the 1950s he worked in PR and advertising before deciding to launch his own manufacturing company specializing in sound suppressors for firearms.

WerBell founded SIONICS Inc. in 1966 and specialized in building clandestine weapons and counterinsurgency equipment for the military and Central Intelligence Agency. The name SIONICS was an Ian Fleming-esque acronym of ‘Studies in Operational Negation of Insurgency and Counter Subversion’. If it sounds a bit dramatized, it was.  WerBell began work designing suppressors for the M16 and M14 applying for his first patents in January 1968.

The SIONICS M16 suppressor was made up of a tubular housing filled with a series of entry, suppression and resonant chambers. The suppression chamber contained sets of helical metal baffles, this design did not utilize wipes. It attached to the rifle’s muzzle via a set of internal threads.

The suppression chamber was separated from the entry chamber by a stepped axially apertured partition. The suppression chamber was ported to allow propellant gasses to enter the helical baffles. The design’s baffles were placed inside the housing alternately opposing each other to avoid the free flowing of the captured gases. The patent explains that the suppressor’s housing varied in thickness in an effort to further deaden sound vibrations. WerBell’s patent also explains “that more than five suppressor units [the helical baffles] may be used if desired” to increase the suppressor’s effectiveness. He notes, however, that testing with just two oppositely wound baffles achieved satisfactory results. 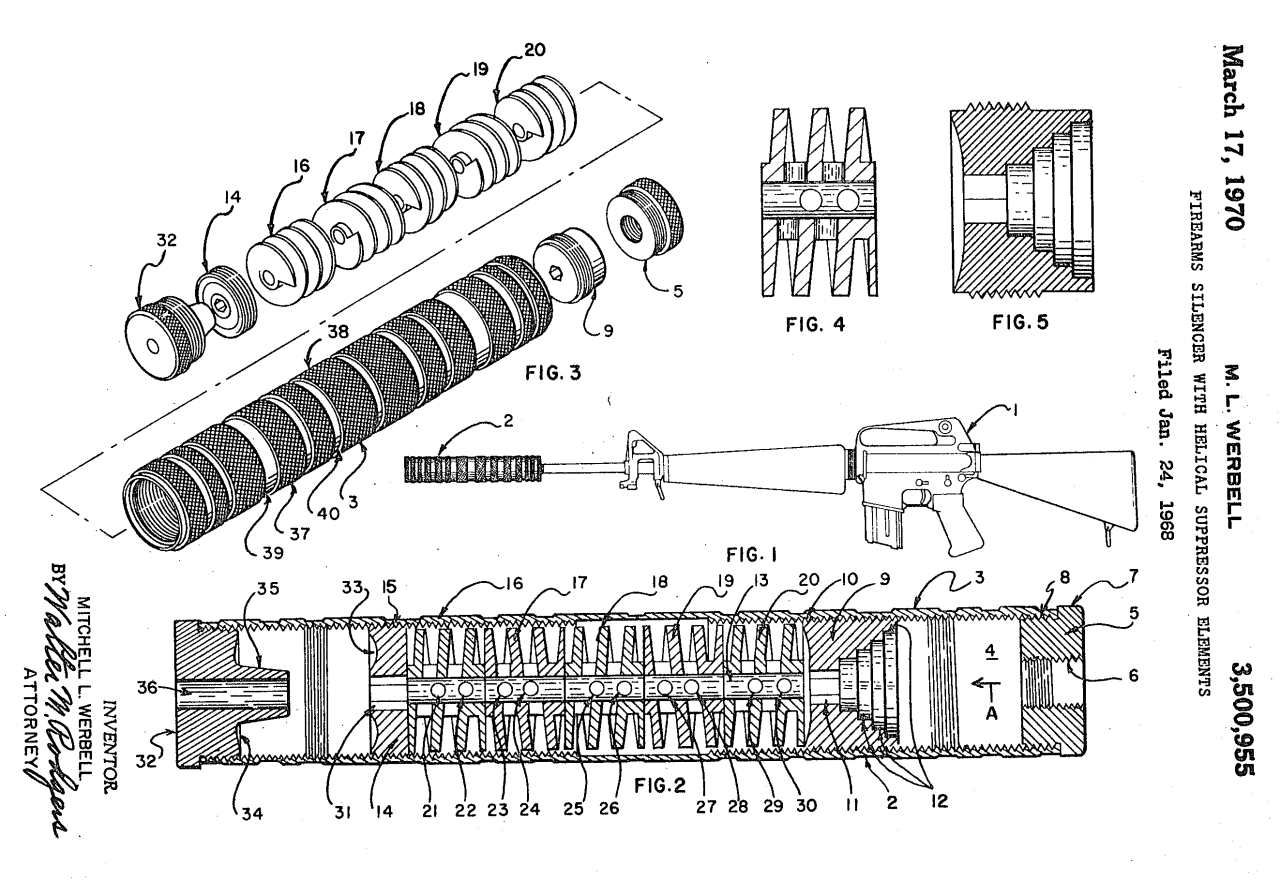 WerBell’s second patent mirrors Maxim’s work by stating the design could also be used as both “silencers for use in conjunction with firearms and as mufflers for internal combustion engines.” His second patent includes some entry chamber variations but retains the helical baffle system. WerBell’s third patent submitted in December 1970 and granted in January 1973 covered the incorporation of a relief valve system to reduce blowback pressure when fitted to rifles and machine guns chambered in 7.62x51mm.

Designed for the M14, SIONIC’s M14SS-1 was 12.75 inches long and 1.7 inches in diameter. It weighed just under 1kg. The early production models used the patented valve system but these suffered failures when the valve acted as a heat sink melting the valve’s spring. The valve’s could not withstand the high gas pressures and a simpler relief port was eventually designed. The majority of SIONIC’s M14SS-1s were purchased by the US Army with a number also being purchased by the US Navy. 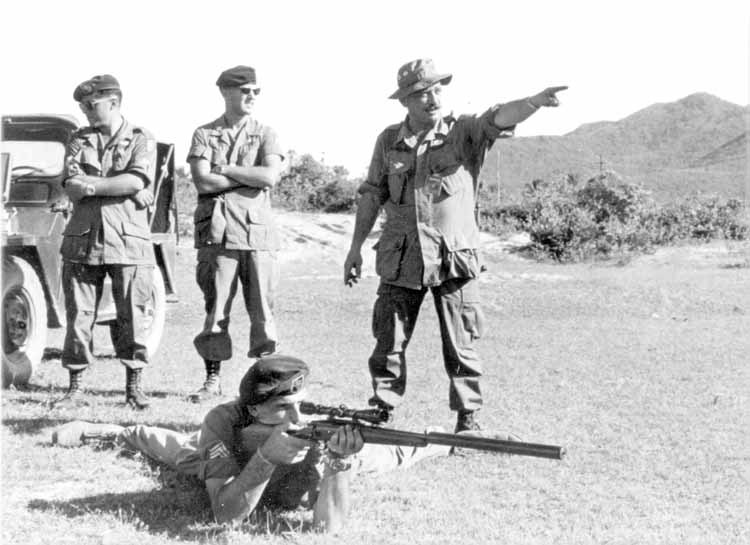 Extensive testing and field testing (with 40 M14SS-1’s sent to the 9th Infantry Division in Vietnam for combat evaluation in 1969) led SIONICS to also develop the MAW-A1 model (Moderator Automatic Weapon – Alteration 1) for the M16. These were frequently used by US Special Forces in Vietnam for long range reconnaissance patrols and clandestine missions. The MAW-A1 was also initially made with the patented relief valve but issues with the M16 also led to the introduction of a more reliable relief port. The MAW-A1 proved to be a reliable and effective design, well liked as it was rated for full auto fire. Many of SIONICS’ suppressors had a rated life span of six months or 200 rounds before the suppressor’s efficiency began to deteriorate. At this point the suppressor could be taken apart and the internals such as the helical baffles could be replaced. SIONICS also developed a series of pistol silencers as well which were used by US Special Forces, often paired with High Standard, Ruger .22LR pistols or with Smith & Wesson’s Model 39 (Hush Puppy). 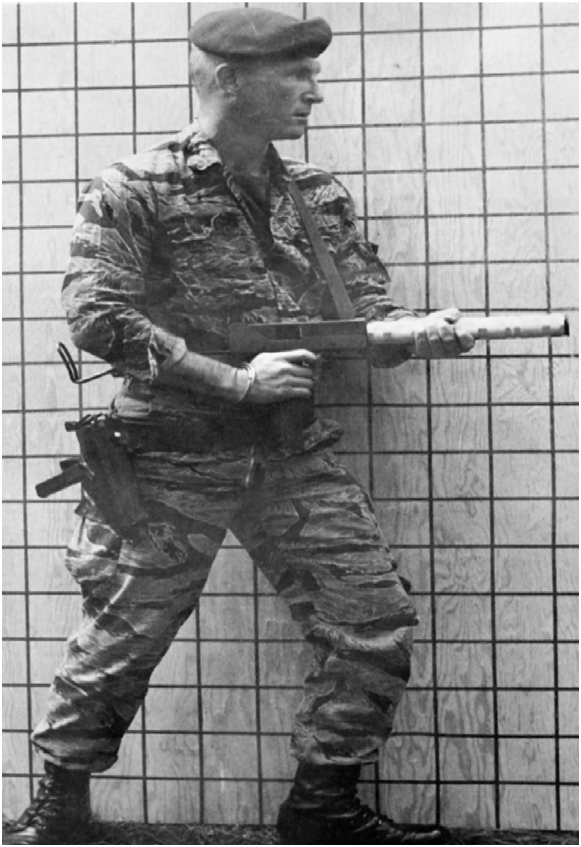 In 1969, Gordon Ingram, famous for his earlier machine gun designs such as the Ingram Model 6, joined SIONICS Incorporated to begin manufacturing his new compact submachine gun design. WerBell had seen the potential of Ingram’s new M10 design and hired him as chief engineer to oversee production of what would become the MAC-10. Ingram had begun work on the M10 in the mid 1960s was chambered in .45 ACP and 9mm but had been unable to find backers. The weapon was small – just 11 inches long, it used a straight blowback operation and was made from stamped sheet steel. It had a telescoping bolt and a combined pistol grip/magazine housing. Firing from an open bolt it fed from 30 round surplus .45 ACP M3 magazines or 32 rounds of 9mm magazines. The suppressor tubes were covered in Nomex-A, a heat resistant polymer to enable the tube to be used as a grip point.

In 1970 the SIONICS and an investment group, Quantum Corp., was incorporated into larger company Military Armament Corporation with WerBell becoming the new company’s president. The new company began production of the MAC-10 in 1970, each gun was threaded to enable it to be fitted with WerBell’s suppressors. The design used was a two-stage suppressor that utilized two sets of WerBell’s helical baffles. Simpler less sophisticated single-stage suppressors were made later that used polymer wipes rather than baffles.

(above) An ARVN officer fires an unsuppressed MAC-10 while WerBell looks on.

The MAC-10 was used in Vietnam by both US Special Forces units and CIA case officers, it was best paired with the subsonic .45 ACP round which also had a slightly slower cyclic rate making it more controllable. The suppressed 9mm versions using supersonic ammunition did not slow the bullet sufficiently to prevent a subsonic crack, however, it did suppress the sound of the round leaving the muzzle. 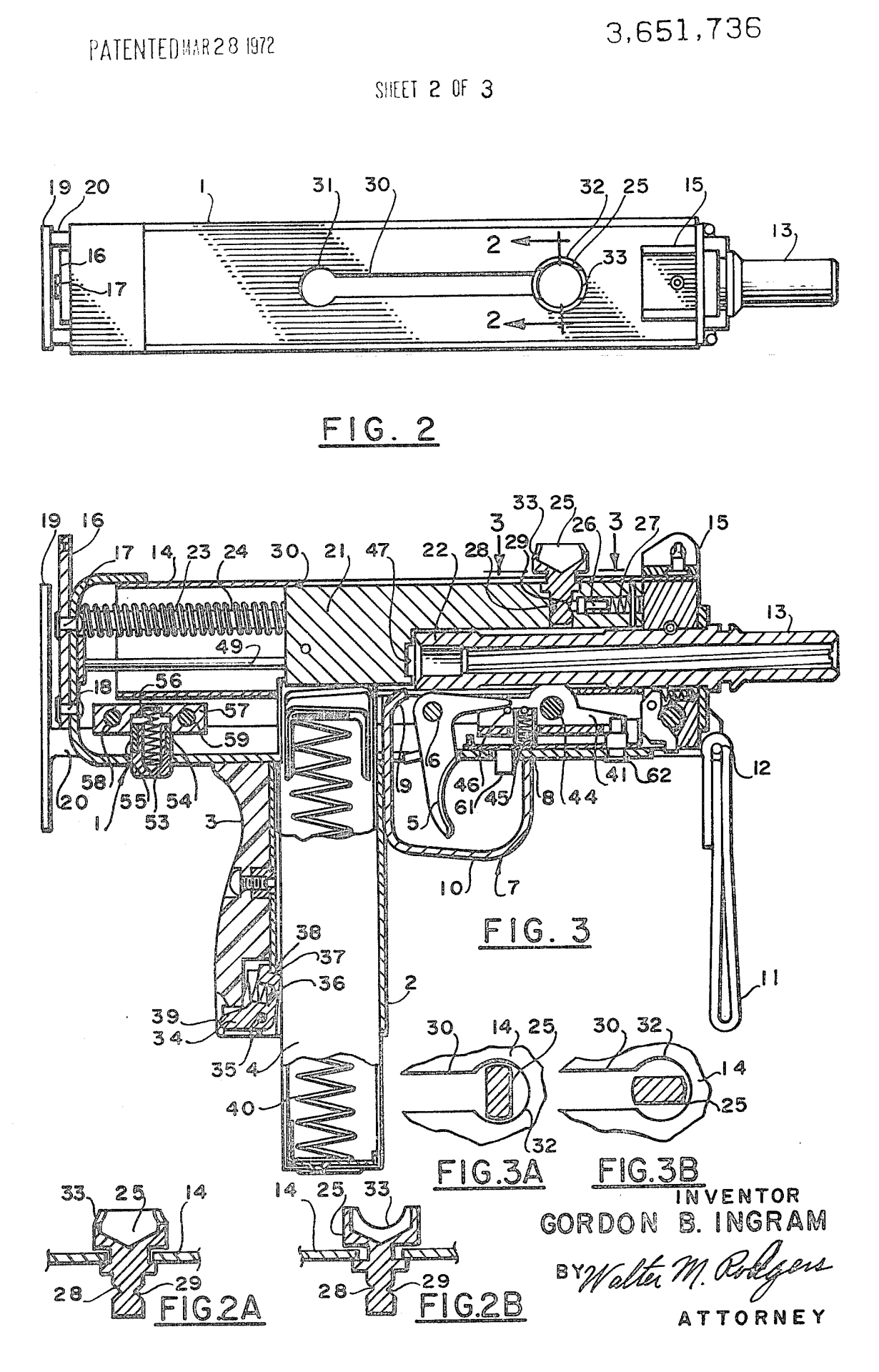 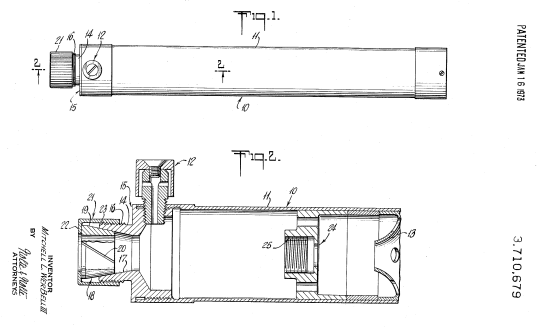 In 1974 the U.S. State Department barred foreign sales of submachine guns with suppressors. This severely curtailed Military Armament Corporation’s sales, attempts were made to sell the MAC-10 without the suppressor and with a longer fixed barrel. However, this removed the gun’s strongest selling points; its compact size and quiet firepower. The Military Armament Corporation declared bankruptcy in 1975 and the company ceased to exist in 1976.

I found the MAC-10 to be difficult to control. The silencer, wrapped with an anechoic coating could be held as a means of control when firing, but it was twitchy because the only thing connecting it to the firearm were the threads on the barrel and at times the silencer metal would actually bend, sending .45 ACP rounds through the casing. The MAC-11 was much smaller and had a very high cyclic rate, but it was loud and even more difficult to control. By the time the company went out of business, there were competing options, UZI being foremost among them and it was a state-backed industrial product where the MAC-10 was not.

My favorite MAC-10 story involves a planned cartel assassination of a member of a rival cartel, using that weapon, while riding a motorcycle through Guadalajara, Jal. They decided to do a dry run near the golf course but did so with a fully loaded magazine, which left the cartel shot caller in the (simulated target) car, dead, and a bystander who had an early start time on the course dead as well. The bystander was not “innocent”, being a high ranking member of the cartel. The shooter, who crashed his motorcycle because of uncontrolled recoil was promptly executed, while trying to stand after the accident. Cynics called it a three-fer.