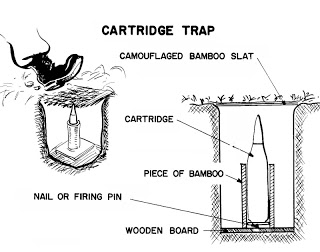 Facebook
Twitter
Pinterest
WhatsApp
This continues an intermittent series on weapons that are particularly adaptable to Special Operations Low Intensity Conflict (SOLIC) situations or so-called ‘zombie wars’. There are a number of weapons that are easy to both make and use in these small wars/guerrilla conflicts. Today, we look at one of the simplest and least expensive land mines/boobytraps, the cartridge trap.

The Vietnamese take credit for coming up with this one because they (the Viet Cong) employed it successfully against the US military in Viet Nam. They’re very simple to build. The Vietnamese usually used a 7.62×39 cartridge but you could also use something as potent ad a .50 BMD cartridge.  A man’s weight will set it off. Bamboo works, so does simple lath and a ten penny nail. They are not immune from detection by a metal detector, but mines are usually area denial weapons. They slow troop movement, allowing for snipers to go to work or they force troops into an un-mined area (killing funnel).
The cartridge trap isn’t as elegant as a “Bouncing Betty” (The German S-mine (Schrapnellmine, Springmine or Splittermine in German), also known as the “Bouncing Betty”) nor is it as effective, but if all you have is wood scraps, a few nails and a  magazine full of cartridges, you can still lay out a minefield that will work.