War of the Roses Ends 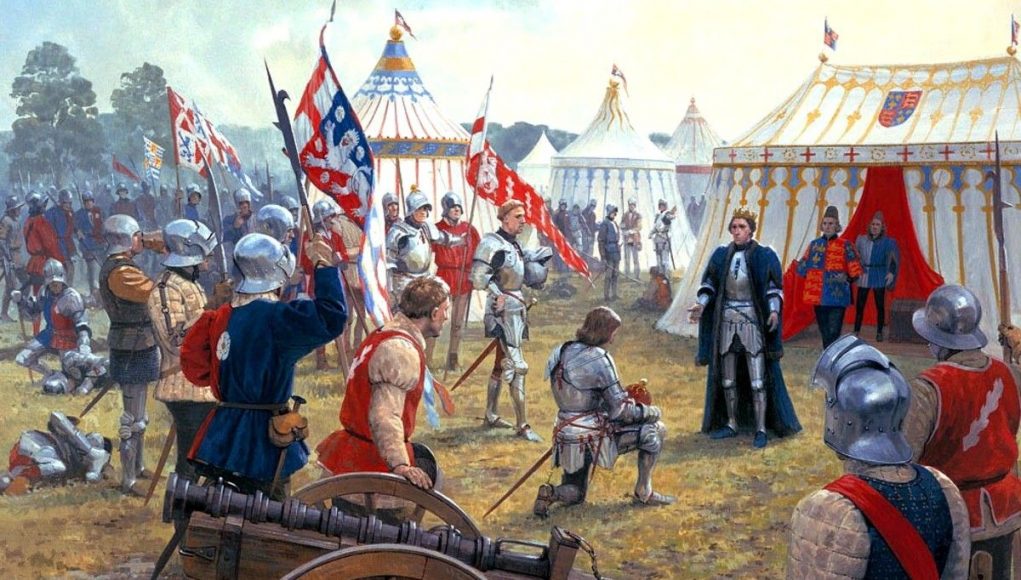 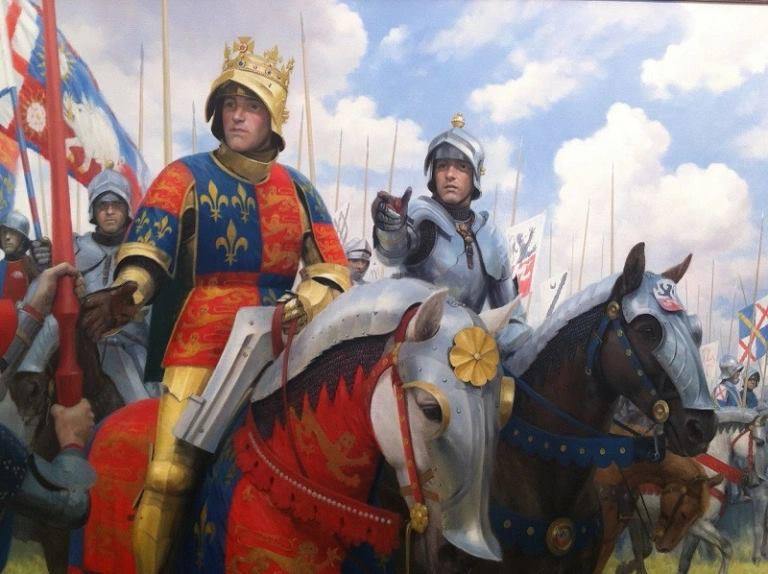 Richard has the distinction of being the last English king to die in battle (and only the second to ever do so, Harold Godwinson being the only other – at the Battle of Hastings in 1066). 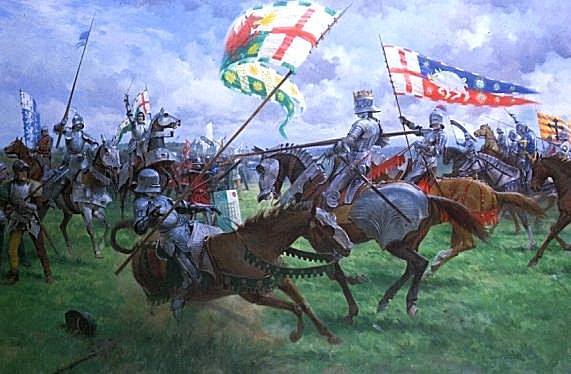 On 22 August 1485 the War of the Roses reached a bloody climax at Bosworth Field. Here, Richard III, England’s most controversial king, defended his crown against the Lancastrian champion Henry Tudor. 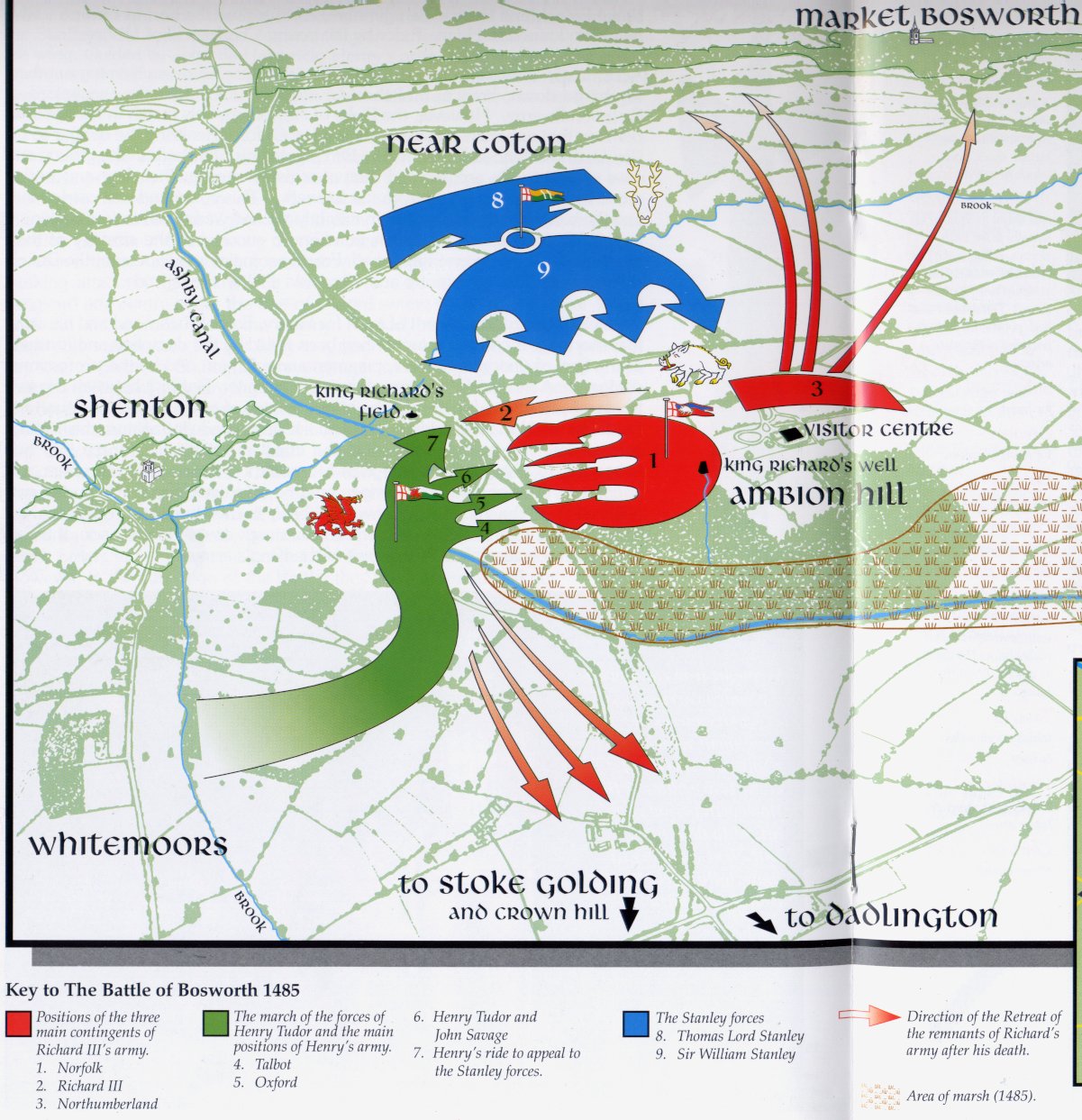 Three armies converged on a field south of Bosworth Market, 13 miles west of Leicester: Richard’s, numbering 10,000; Henry Tudor’s army, numbering 5,000; and that of the Stanley brothers, some 6,000 strong. The Stanleys had been in close communication with Tudor, and were ostensibly his ally. However, on the day of battle, they refused to declare themselves one-way-or-another; making the Battle of Bosworth Field a three-sided affair.

Richards took up a position on Ambion Hill, a strong position dominating the battlefield. Elevation aside, it was protected (or constricted, as events would show) by a marsh in the low ground to the left. Richard’s deployment is disputed: Norfolk’s van may have been in the front or on the right of the Yorkist forces, with Richard, commanding the main behind this (or in the center) at the crest of the hill. Northumberland deployed his 4,000 man rear behind or to the left of Richard’s main. 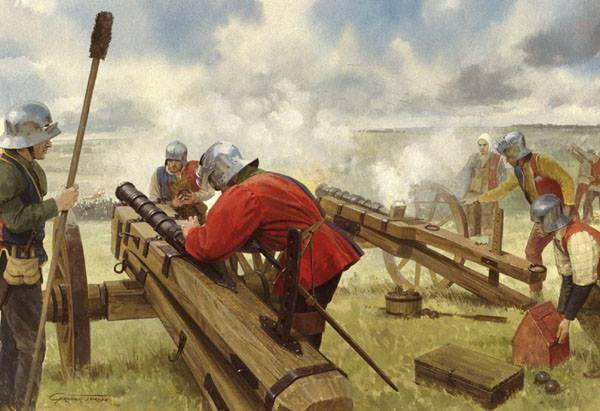 Outnumbered, Richard’s group fought valiantly but were cut down. Richard hacked left and right with his battle axe, shouting “Treason!” with each blow.

His horse mired in the soft ground, Richard was forced to continue the fight on foot. Here Shakespeare had him shouting, “A horse! A horse! My kingdom for a horse!” However, accounts indicate that Richard’s followers offered him their own mounts so he could escape. But Richard refused to quit the field. All chroniclers agree that Richard fought bravely to the end. Eventually overwhelmed, the last Plantagenet King of England died fighting.

(On September 12, 2012 skeletal remains were identified as Richard III. The remains showed some 10 wounds, evidence of Richard’s fearsome last fight. An arrowhead was found embedded in the spine. Perhaps this wound, inflicted by an enemy archer at close range, brought the battling King to his knees. The killing blow seems to have been a blow to the back of Richard’s head by a halberd or bill. Almost certainly Richard’s helmet had been knocked off first; as the blow cleaved very deeply into his skull and through the lower brain. Several postmortem wounds were also inflicted upon the dead king’s body.) 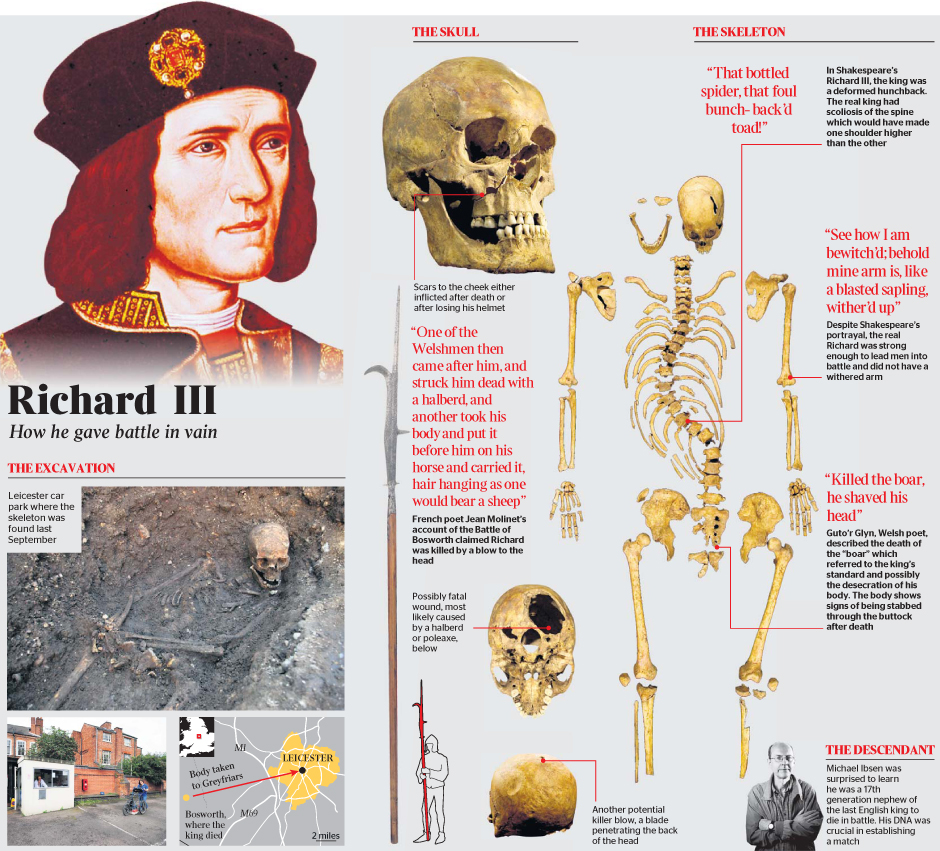