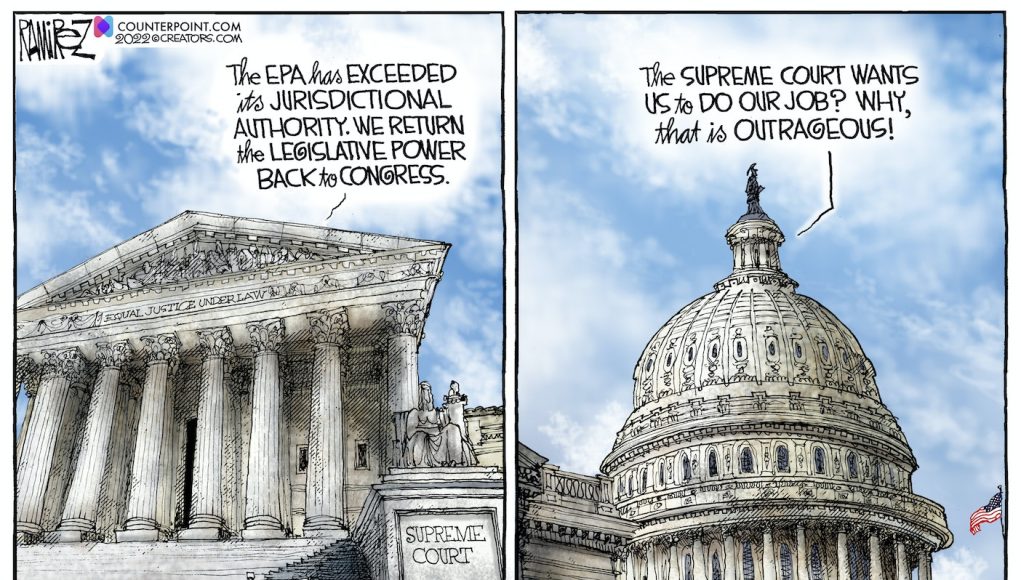 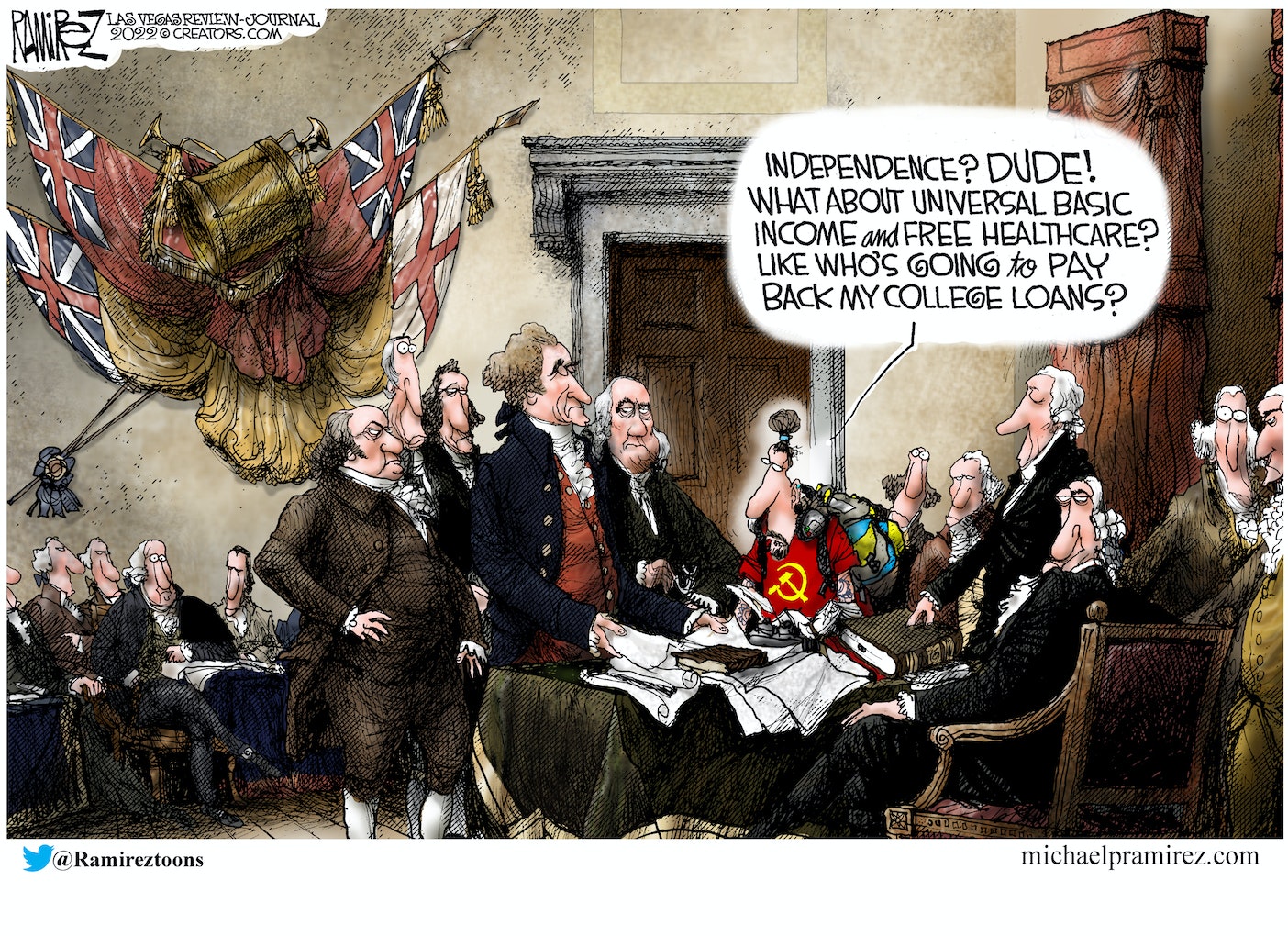 Up to the 1630s, it was a captain’s responsibility to choose the lieutenants and the crew of the ships, whereas captains themselves were selected by the naval authorities. This left some room for corruption, and captains sometimes did not fill all the vacancies of a ship’s crew, even at lieutenant’s rank, so that they could pocket the difference in wages themselves. In a bid to stop the fraudulent practice the government decided it would appoint lieutenants. Much concern was expressed by the government and naval authorities about the quality and professional competence of its commissioned officers during the 17th-century anglo dutch wars.

These concerns centered around gentlemen officers from wealthy and aristocratic backgrounds who had received commissions and promotions not on the basis of their ability, but through patronage and interest ahead of more deserving and experienced professional seamen- tarpaulin officers who lacked the right social background and connections. A prime example of this was the rapid promotion of Sir William Berkley between 1661 and 1665 from lieutenant to vice admiral. As a result, measures were brought in to ensure that the most suitable candidates were recruited as commissioned officers. In 1665, the government ordered that no man could be rated midshipman unless he could undertake the duties of a commissioned officer. Examinations were introduced in 1677 to test whether would be lieutenants had the relevant skills, knowledge, and experience required to perform the duties expected from the rank.

Candidates taking this examination had to be aged 20 or over (later reduced to 19) and were required to have served at least 3 years at sea (later extended to six) – one year of which was to be served as a midshipman and produce certificates signed by their captains confirming they were suited to be a lieutenant. Most aspiring commissioned officers were sons of peers, baronets or the landed gentry. They could join the Navy in several ways to serve the necessary qualifying time to be able to sit the lieutenancy examination.

The traditional method was a captain’s servant. This rating was given to boys who served a type of apprenticeship under the patronage of a captain, who took them to sea more often than not to oblige relatives or friends. This custom of allowing officers their own retinue went back to the Middle Ages. In 1700, captains were allowed four such servants for every 100 men on board their ships. This led to a common abuse of the system in that actually being on board as captain’s servant, thereby giving them false sea time to qualify them for the lieutenancy examination once they were older. One such captain was Sir Isaac Coffin, who was court martialled in 1788 for keeping false musters having entered the names of four boys, including two of Lord Dorchester’s sons, for this very reason.

Another way of becoming a commissioned officer in the Royal Navy was as a volunteer. A new rating of volunteer by order with the patronage of the King was introduced in 1676, with the aim of recruiting young gentlemen to the Navy who are more sensible of honor that a man of meaner birth. They had to be at least 16 years old and brought up by times at sea and willing to apply themselves to the learning of navigation and fitting themselves for the service at sea. These volunteers, also known as King’s Letter Boys because their appointment was by the authority of the King tended to be older than captain’s servants and were nominated by the Admiralty for service in ships.

The idea was to educate at least 40 students, with places given to officers’ sons because the joining costs were too high. They would be trained in the important subjects of Latin, writing, arithmetic, drawing, fortification, mathematics, fencing, and the use of small arms. In addition, they would work in a dockyard to learn shipbuilding, rigging, and the use of guns. After completing the academy, the young gentlemen’s time at sea would be shortened by two years. The program was not popular with the captains, as it reduced their privilege to appoint their own boys to their ships. Many places were not taken up over the years. And the reputation of the academy was very poor, with many of the students misbehaving, getting drunk, and whoring around town.

In 1773 the academy became known as the Royal Navy Academy and in 1806 the Royal Navy College. With fundamental changes in the way it repented and treated its students, the reputation recovered and the number of students rose to 70, although the incentive among the captains was never particularly high. And as a result, the college stopped admitting students in 1837. Scholars of note who did attend the school include Philip Broke, captain of HMS Shannon, who is famous for his victory over the USS Chesapeake in 1812; and Jane Austen’s two brothers Francis and Charles, who later became admirals.

The number of ranks and ratings on board each ship was fixed by the Admiralty. This limit on numbers meant that it was sometimes difficult for young gentlemen under Admiralty patronage to secure employment on board a ship given that captains chose a ship’s crew and were more likely to favour their own choice of men. So that volunteers per order (1676-1729) and college volunteers (1729- 1816) were given an opportunity to acquire the necessary qualifying time to take the lieutenancy examination, Pepys introduced during the 1660s the rank of the midshipman ordinary. This rank was treated as a supernumerary, paid only as an able seaman, and took the place of a seaman on board a ship. The rating of captain’s servant was abolished in 1794 and was replaced by volunteer first class, the number of which was officially limited. Boy’s age of entry was set at 13 unless they were sons of officers, in which case they could be 11.

The Admiralty, however, still had no great control over who could be nominated as a volunteer first class; this was still the personal decision of captains. By the early 1830s captains, were selecting fewer candidates as volunteers first class, mainly because after the Treaty of Paris in 1815 fewer officers were required.

A bomb vessel was used to destroy coastal fortifications or to set coastal towns on fire. The first known use of such ships dates back to the 14th century. There they were used during the siege of Calais under Edward III. But they were not real bombers yet, but only small ships equipped with bombards and other artillery. First ships specialized in bombing were developed by B. Renaud at the end of the 17th century. They called themselves galiote à bombe and had evolved from the Dutch galiot.

These ships had one-half masts and the two mortars, which could shoot projectiles with 200 pounds, were directed forward. To aim these weapons, the entire ship was rotated by letting out or pulling in a spring anchor. Five such vessels were used to shell Algiers in 1682 destroying the land forts, and killing some 700 defenders. Since these five ships had been so successful, they had also been used in the bombing of Genoa. Shortly afterward so-called bombards were built, these were two-masted ketches of medium size. They were very flat so that they could get close enough to the land. The mortars warned here on beddings in the front ship part set up and fired over the bow, so that not the whole side was facing the country.

Detail of a model of a french bomb ketch © sailsofglory

In the 17th century, the British started to construct their own bomb vessels. Only in the course of the 18th century, they moved the mortars to the middle of the ship, which were located on revolving platforms. These platforms were supported by a strong inner wooden frame in order to transfer the forces of shooting the weapons to the hull. The spaces between the scaffolding were used as storage areas for ammunition.  Bomb vessels usually were attended by an accompanying tender. With all the additional reinforced structures to shoot the mortars, there was little space aboard to hold the ordinance and powder. Also, explosive shells (bomb ketches were the only ships in the Royal Navy’s arsenal to use exploding shells) proved the most dangerous and needed to be kept further away from the primary source of the fire.

A model depicting the midship section of a bomb vessel © NMM

As a result, British bomb vessels were constructed until the 18th century as full ships with three masts and two mortars, one between each pair of adjacent masts. Also, the fore rigging was special here because there was to be feared that this would catch fire with the firing of the mortars, chains were used here instead of ropes. Mortars were the only kind of naval armament to fire explosive shells rather than solid shot until the invention of the Paixhans gun.

Since it was considered dangerous to have large stocks of shells on board the ships that were firing them, and because the reinforced mortar platforms occupied so much space below decks, bomb vessels were usually accompanied by a tender to carry ammunition as well as the ordnance officers in charge of firing the mortars. However, as naval warfare became more advanced, bomb ships were also accompanied by frigates to protect them from direct assault by faster, smaller vessels.

Bomb vessels were highly specialized and expensive to fit out and maintain. They were built with extremely strong hulls to withstand the recoil of the mortars, several were converted in peacetime as ships for exploration of the Arctic and Antarctic regions, where pack ice and icebergs were a constant menace.

The Paraguayan War, also known as the War of the Triple Alliance, was a South American war that lasted from 1864 to 1870. This war was fought between Paraguay and the Triple Alliance of Argentina, the Empire of Brazil, and Uruguay. It was the deadliest and bloodiest inter-state war in Latin American history. Paraguay sustained large casualties, but even the approximate numbers are disputed. Paraguay was forced to cede disputed territory to Argentina and Brazil. The war began in late 1864, as a result of a conflict between Paraguay and Brazil caused by the Uruguayan War. Argentina and Uruguay entered the war against Paraguay in 1865, and it then became known as the “War of the Triple Alliance”. 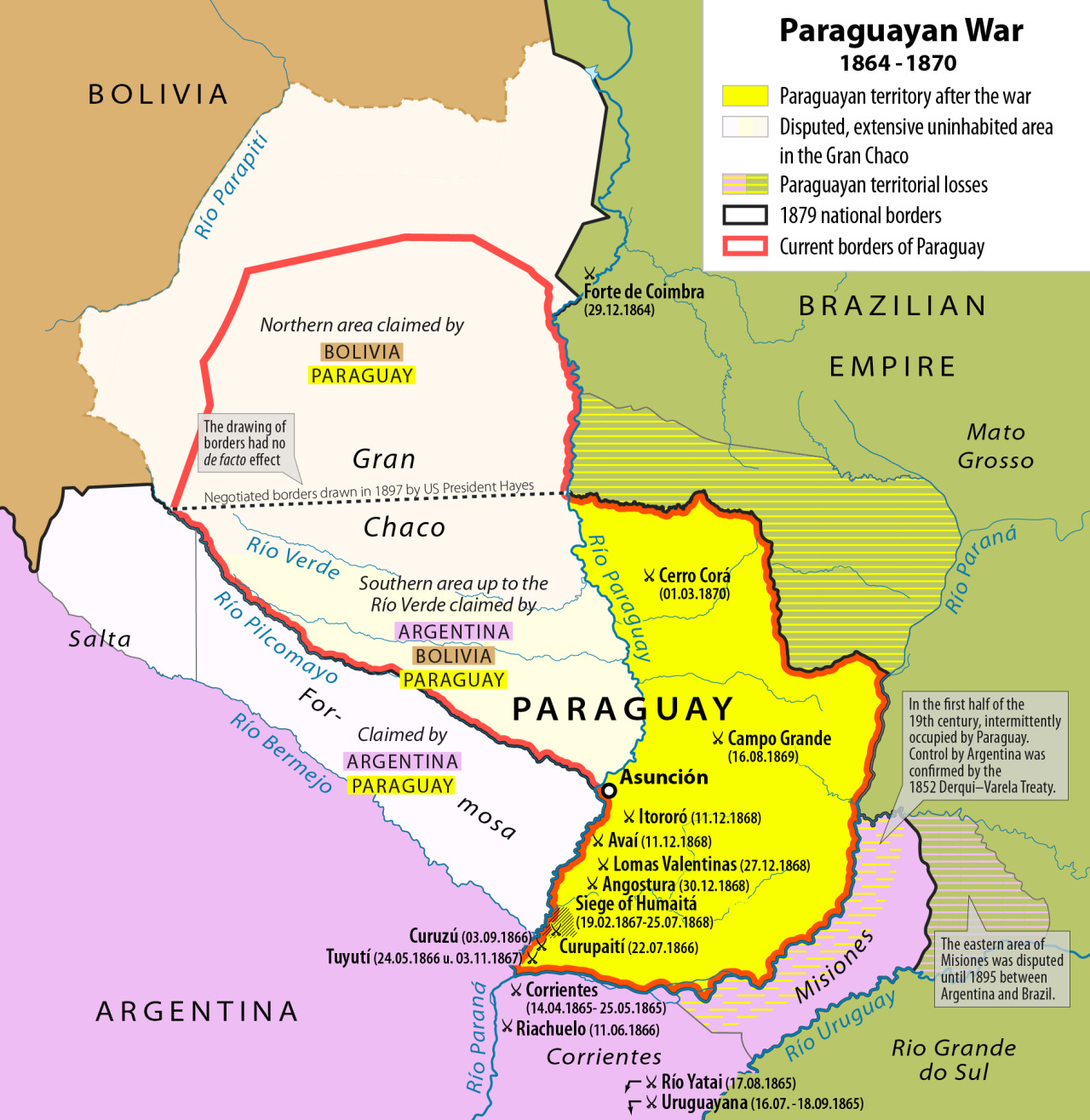 After Paraguay was defeated in conventional warfare, it conducted a drawn-out guerrilla resistance, a strategy that resulted in the further destruction of the Paraguayan military and the civilian population. Much of the civilian population lost their lives due to battle, hunger, and disease. The guerrilla war lasted for 14 months until President Francisco Solano López was killed in action by Brazilian forces in the Battle of Cerro Corá on 1 March 1870. Argentine and Brazilian troops occupied Paraguay until 1876.

Paraguay permanently lost its claim to territories that, before the war, were in dispute between it and Brazil or Argentina, respectively. In total, about 140,000 square kilometers (54,000 sq mi) were affected. Those disputes had been longstanding and complex.

But just in case you saved some of your fireworks for use later: 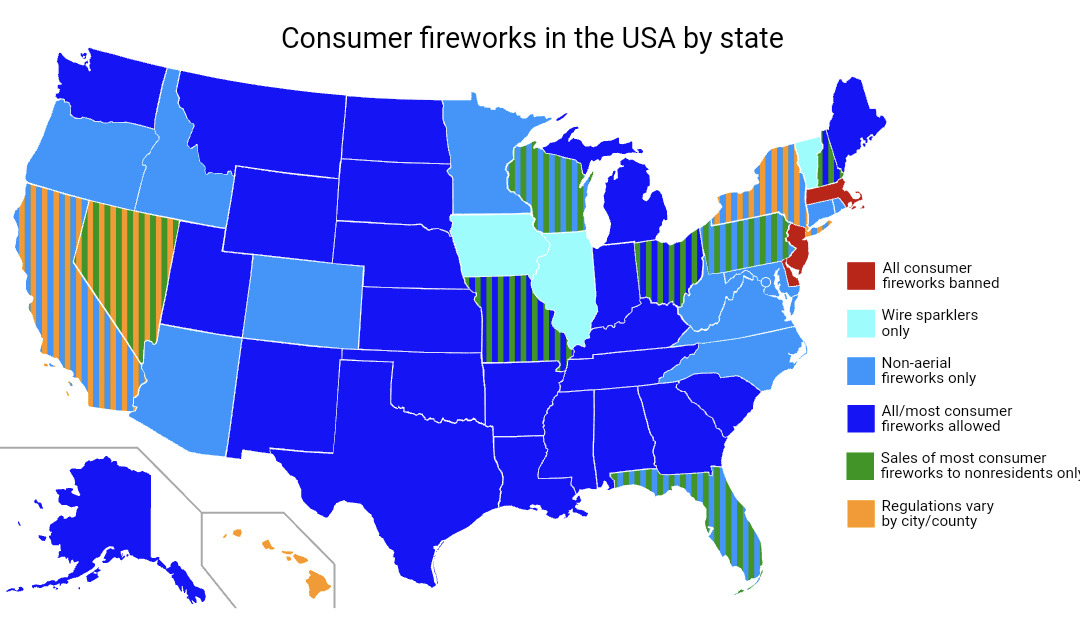