The 75th Infantry Regiment suffered a defeat at Cisterna.

Trained and equipped to raid behind enemy lines, “Darby’s” US Army Ranger battalions were misused as spearhead units for an American effort to breakout of the Anzio beachhead.

Moving under cover of darkness to seize the town of Cisterna, supposedly only a lightly-held outpost in front of the main German lines; they were unaware that it was the assembly area for the elite Herman Goering Panzer Division and the 15th Panzer Grenadier Division.

Army intelligence had warned of the mistake, the information was slow to filter down to the operational planners, who were anxious for a victory. 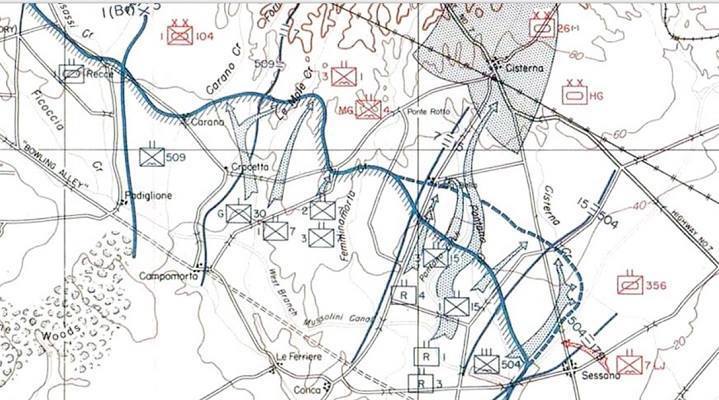 The movement to the objective was slower than anticipated, and the 3 Ranger Battalions, along with the 509th Parachute Infantry Regiment were still moving at dawn across open ground toward the Cisterna. Detected by the Germans, they were engaged in the open by the German armor and armored infantry (Panzer Grenadiers). A fierce battle erupted, with Rangers capturing or destroying several German tanks. Significant German reinforcements (elements of the 26th Panzer Division and the 1st Fallschirmjäger (Airborne Division) moved to the attack, and with Ranger prisoners being used as human shields by the Germans, the American force was either captured or destroyed.

The battle lasted seven-hours. Only six of the 767 Rangers and one member of the 3rd Recon Troop returned to Allied lines, resulting in an overall loss of 803 men. Over 400 Rangers became POWs. German casualties were comparable.

It was perhaps greatest disaster suffered by American Special Operations Forces in their history. It resulted in the disbandment of all Ranger units in the Italian theater (though Rangers continued to see action at Normandy and France). Ranger commander William O. Darby was reassigned, ultimately becoming Assistant Division Commander for the 10th Mountain Division.

The Battle of Cisterna is a classical example of the misuse of special operation groups by ‘conventional’ military planners.

It was a mistake, on a far smaller scale, repeated with SEALs in Panama (Operation Just Cause – Invasion of Panama) and elsewhere.