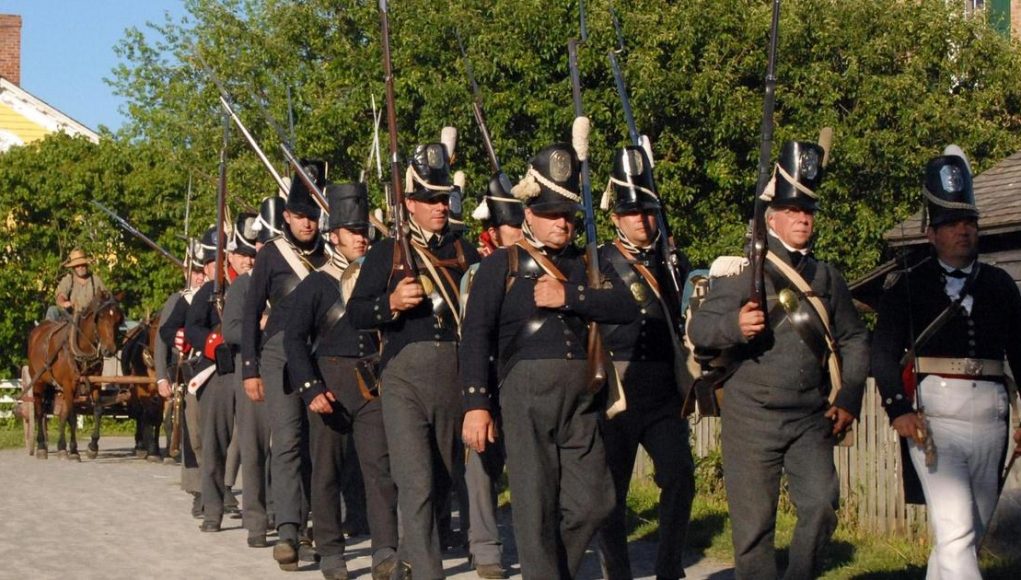 The Battle of Frenchtown took place in and around the Frenchtown Settlement, founded in 1784 on the River Raisin River in the Michigan Territory. The overall conflict – a series of engagements – took place from January 18 through 22. The heaviest fighting took place on January 22 and may have continued for several days after that. 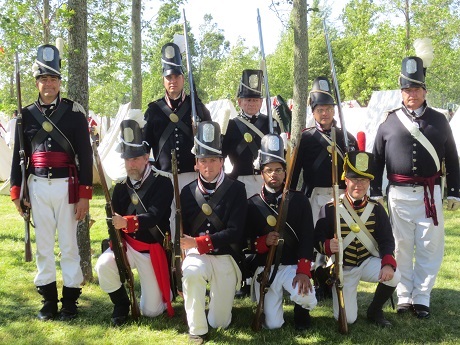 The name “River Raisin Massacre” is used for the events of January 23, the day after the surrender, when pro-British Indians murdered dozens of wounded volunteer soldiers from Kentucky.

Six months previously, on August 17, 1812, the American Army of the Northwest surrendered to the British following a siege of Fort Detroit. The Indians, who wanted to land on the winning side, went over to the British.

Fort Detroit was a strategic outpost and a potential base for any US invasion of British Upper Canada. Its loss to the British gave them a base to increase their presence in the Michigan Territory. When the British captured Detroit, the Frenchtown militia also surrendered and were disarmed. This led to depredations by the Indians and occasionally by the British, who found the unarmed citizens to be easy pickings. 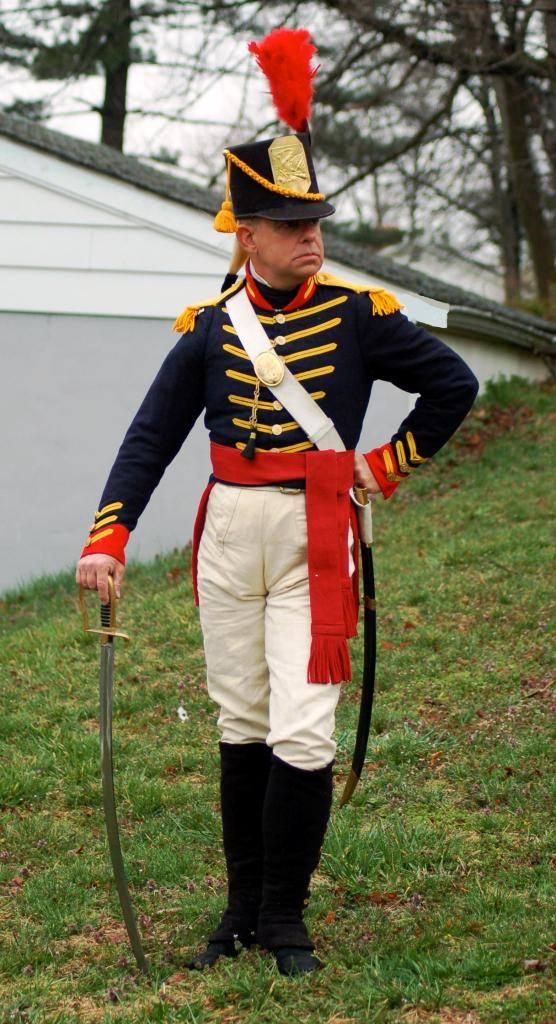 The command of the Army of the Northwest was given to  Major General William Henry Harrison. A campaign was formulated to recapture Fort Detroit and the surrounding area. Meanwhile, Brigadier General Henry Procter, commanding the British Army around Detroit, assembled all the British troops available, supported by about 500 Native Americans under the Shawnee leader Tecumseh. While Tecumseh was present during the Frenchtown fighting, he did not participate and left before the massacre.

General James Winchester, the second-in-command of the Army of the Northwest, led a column consisting of 1,000 inexperienced regulars and Kentucky volunteers. General Harrison had ordered him to remain within supporting distance of Harrison’s column, near the Maumee River, about 30 miles south of Frenchtown.

Ignoring his orders, Winchester sent a relief column of 667 Kentuckians and 100 local French speaking militiamen north under LTC William Lewis. Lewis attacked a British and Indian camp containing 63 soldiers of the Canadian (Essex, Kent and Scots) Militia, accompanied by a 3-pounder cannon, and about 200 Potawatomi. A brisk battle took place before the Americans forced the British and their allies to retreat. The Canadians charged the American lines several times, supported by the gunfire of the Indians.

During their retreat from Frenchtown, the Potawatomi raided Sandy Creek, a small settlement founded in 1780 about 2 miles north of the Raisin River. The Indians burned all 16 houses to the ground, and killed at least two of the town’s inhabitants.

The American forces under Winchester had not resupplied, and following the action, were low on ammunition.  They gathered at Frenchtown, but had not fortified the town, rebuilt the palisade around the city, not had they dug in, preparing for a counterattack.

I suppose that one should excuse sloppy behavior in green troops and a commander who doesn’t know enough to see to their defense, but I don’t.

Several days after the first clash, local residents reported to Winchester that a large British force was heading toward Frenchtown. Winchester ignored their warning, insisting it would be “some days” before the British “would be ready to do anything.” His troops were camped throughout Frenchtown, some quartered with residents. Without ensuring that sentries and pickets had been placed, Winchester retired for the night to his headquarters at the Navarre House south of the town.

On hearing that the Americans had recaptured Frenchtown, British Brigadier General Henry Procter, commander of the British forces around Detroit, marched with his troops from Fort Malden and crossed the Detroit River from Upper Canada, invading Michigan in strength. His army consisted of 597 regulars from the 41st (Welch) Regiment of Foot and Royal Newfoundland Fencibles (Canadian militia), joined by about 800 Indians. This force linked up with elements of the Essex militia who had fallen back after their initial defeat on January 18. 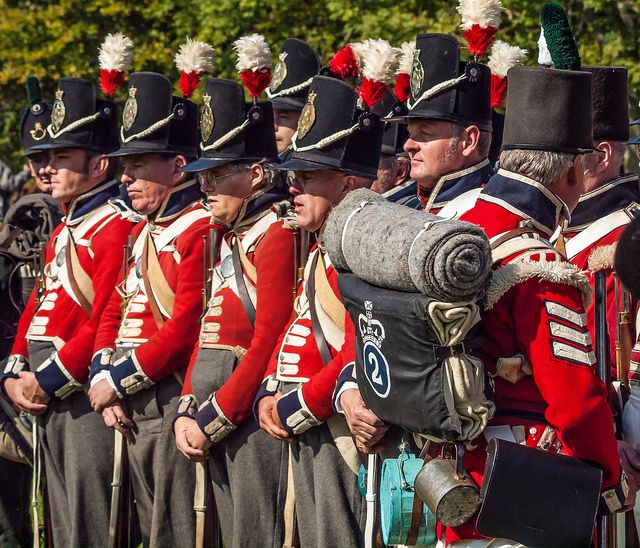 Shawnee leader Tecumseh was in the area, but he was not present at the Battle of Frenchtown. He left command of the Native Americans to Wyandot chiefs Roundhead and Walk-in-the-Water. The Indians included Shawnee, Potawatomi, Ottawa, Chippewa, Delaware, Miami, Winnebago, Creek, Sauk, and Fox tribes. Procter’s artillery consisted of six light 3-pounder cannons drawn on sledges, manned by men from the Canadian Provincial Marines under the command of Lieutenant Frédérick Rolette.

Procter halted about 5 miles north of the Raisin River to organize his troops for battle on January 21.

Proctor surprised the American forces before sunrise on January 22. “On the 22nd, before daybreak, came within sight of the enemy… such was their security and negligence that… our line was actually half formed within musket shot of their defenses before they were even aware of our presence.”

In the confused and panicked defense of Frenchtown, the Americans (under fire from musketry, close assault by Indians and bombardment from artilery, broke and ran.

147 men, including Winchester, were captured by the Indians and Canadian militia. Chief Roundhead stripped Winchester of his uniform before he turned him over to the British, which led to a legend that he was captured in his nightshirt. The remaining Americans were scattered and in no position to fight. The 17th’s colonel, John Allen, was shot dead and scalped. Dozens had laid down their weapons in surrender, only to be tomahawked by the Indians. Men of the other units also tried to flee; most were run down and killed. A few succeeded in escaping by simply removing their shoes and running in their stockings, which left footprints in the snow that looked like moccasins. Thus they were not followed.

While that was going on, the 1st and 5th Kentucky Rifle Regiments and the 1st Volunteers continued to hold out in Frenchtown. Losing 5 killed and 40 wounded, they had succeeded in taking a heavy toll on the British artillery. Their marksmen had killed or wounded all but one member of the gun crews manning the three cannon in the center of the British line, plus 13 of the 16-man howitzer crew. They had also brought down many infantrymen. Now, however, they were finally running out of ammunition, having repulsed three British assaults.

Gen. Proctor demanded Winchester order his remaining men to surrender. Otherwise, all would be killed and Frenchtown burned. Procter insisted on an unconditional surrender and refused Winchester’s counter-proposals, since Winchester was already his prisoner. Major George Madison, a United States officer still on the battlefield, persuaded Procter to accept a surrender on the promise that all would be protected as prisoners of war.

When they saw the British waving a white flag, the Kentucky riflemen thought it meant a call for a truce. Instead, a British officer handed them a written order from General Winchester to surrender. They refused and decided to fight to the death rather than trust the Indians. After another three hours of fighting, Major Madison issued a formal declaration of surrender.

On the morning of January 23, the Native Americans began robbing the injured Americans in Frenchtown. Any prisoner who could walk at all was marched toward Fort Malden; those more severely injured were left behind, and the Native Americans killed them. The Native Americans also set fire to the buildings that housed the wounded. Prisoners who escaped from the burning buildings were killed; the rest died in the flames. As the Potowatomie marched prisoners north toward Detroit, they killed any who could not keep up. According to an account from a survivor, “The road was for miles strewed with the mangled bodies.”

James Winchester largely bore the responsibility for the devastating loss at Frenchtown. His ill-prepared defensive planning following the successful First Battle of the River Raisin led to the defeat of his army and the high number of deaths suffered by his column.

British General Procter, fearing that General Harrison would send more Americans to Frenchtown, made a hasty retreat slightly north to Brownstown. Harrison was forced to call off his plans for a winter campaign to retake Detroit. The city was held by the British until a United States victory at the Battle of Lake Erie on September 10, 1813 allowed the recapture of Detroit. Frenchtown was held as a stronghold by the British until Colonel Richard Mentor Johnson from Kentucky led his cavalry to liberate the town on September 27, 1813. The retreating British were pushed back into Upper Canada, where they were defeated at the Battle of the Thames on October 5.