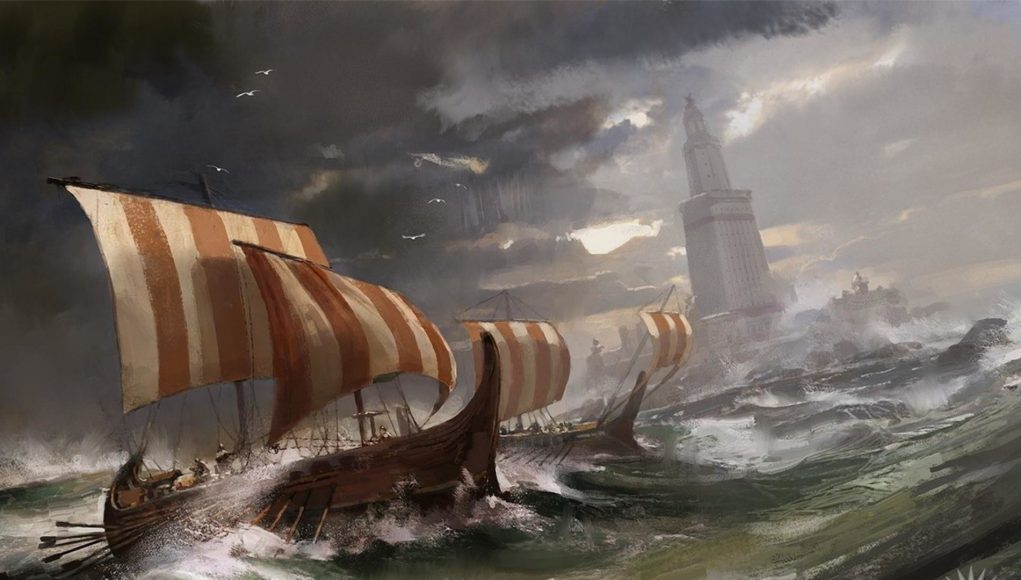 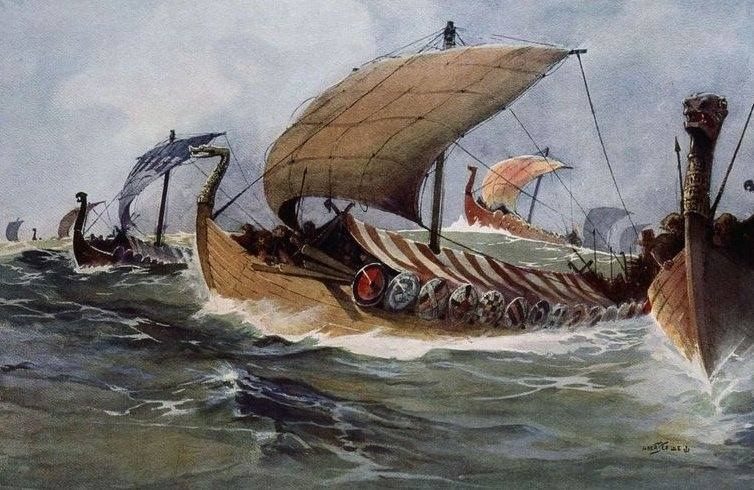 Following the killing of their legendary father Ragnar Lodbrok by the Northumbrian king Ælla in 865, the “Sons of Ragnar” took command of the Viking army their father had led in raids throughout Francia and perhaps Ireland. Vowing revenge against Ragnar’s killer, the brothers invaded England later that year (or early the following year, 866). Landing in East Anglia, the Danes make a temporary accord with the local king, Edmund, and establish a base. There the Danes gathered horses, and by early winter 866 were a fully mounted force.

In November, the Danes rode north into Northumbria, and seized York during a time of civil war between Ælla and another contender. The Danes placed a puppet ruler in York, supported by a small garrison, and the brothers returned to their winter quarters in East Anglia.

The following year, the two rival Northumbrian “kings” united and attempted to throw out the Danish invaders. At the subsequent Battle of York, the Northumbrians were crushed. According to the saga, Ælla was captured and the brothers exacted vengeance for their father by carving the “blood eagle” on Ælla’s back. King Edmund of East Anglia soon fell-out with the Danes, and in 869 was captured and “martyred” by the brothers. 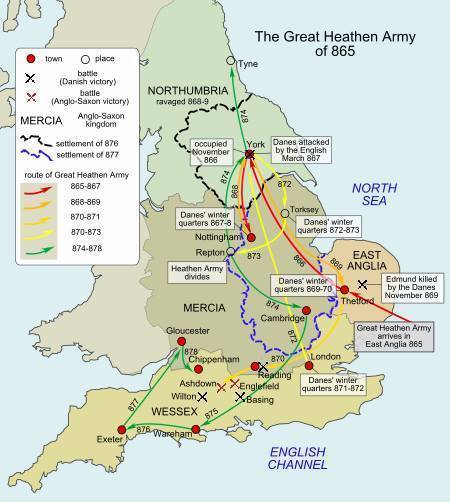 For the English this was the beginning of a very dark time. Over the next half-decade the “Great Heathen Army” (as English chroniclers came to call it) would overthrow three of the four Anglo-Saxon kingdoms of England. Only Wessex, led by Alfred the Great, would maintain its independence; ultimately stopping the Danes from completing their conquest.

The size of the “Great Heathen Army” is uncertain. The lowest estimate by “minimalist” historians is 1,000.  Considering that these were all well-armed and armored veterans of decades of fighting in Francia and elsewhere, the Danes would have had a great initial advantage in battles against the English; whose armies were mostly comprised of unarmored militia (the fyrd) leavened with a small number of professional warriors (thegns). In the years of warfare that followed, however, the English under Alfred gained experience and in time were the equals of the Danes in battle.

According to the English sources the “Great Heathen Army” was led by Hyngwar, who is almost certainly Ivar the Boneless: one of the sons of Ragnar Lodbrok who, according to the Scandinavian saga, led the army in its invasion of England. The other brothers who were Ivar’s co-commanders were Halfdan and Ubba Ragnarson. Ivar turned over command to his brothers in or around 870 and disappeared from English history. However, many scholars believe he took a portion of the army to Ireland, where he is synonymous with “Ímar”, founder of the Uí Ímair (Dynasty of Ivar) which ruled in Dublin and the Isles of the Irish Sea and western Scotland throughout much of the next century-and-a-half.

It is HIGHLY doubtful that Ivar was truly “boneless”, or a cripple: 9th century Scandinavian/Viking society was no place for a cripple, who would have been unlikely to survive childhood much less become a war leader in a warrior society. What is more likely is that Ivar’s nickname comes from some physical trait such as extreme flexibility (that he was perhaps “double jointed”), and moved and fought like a man who had no bones. 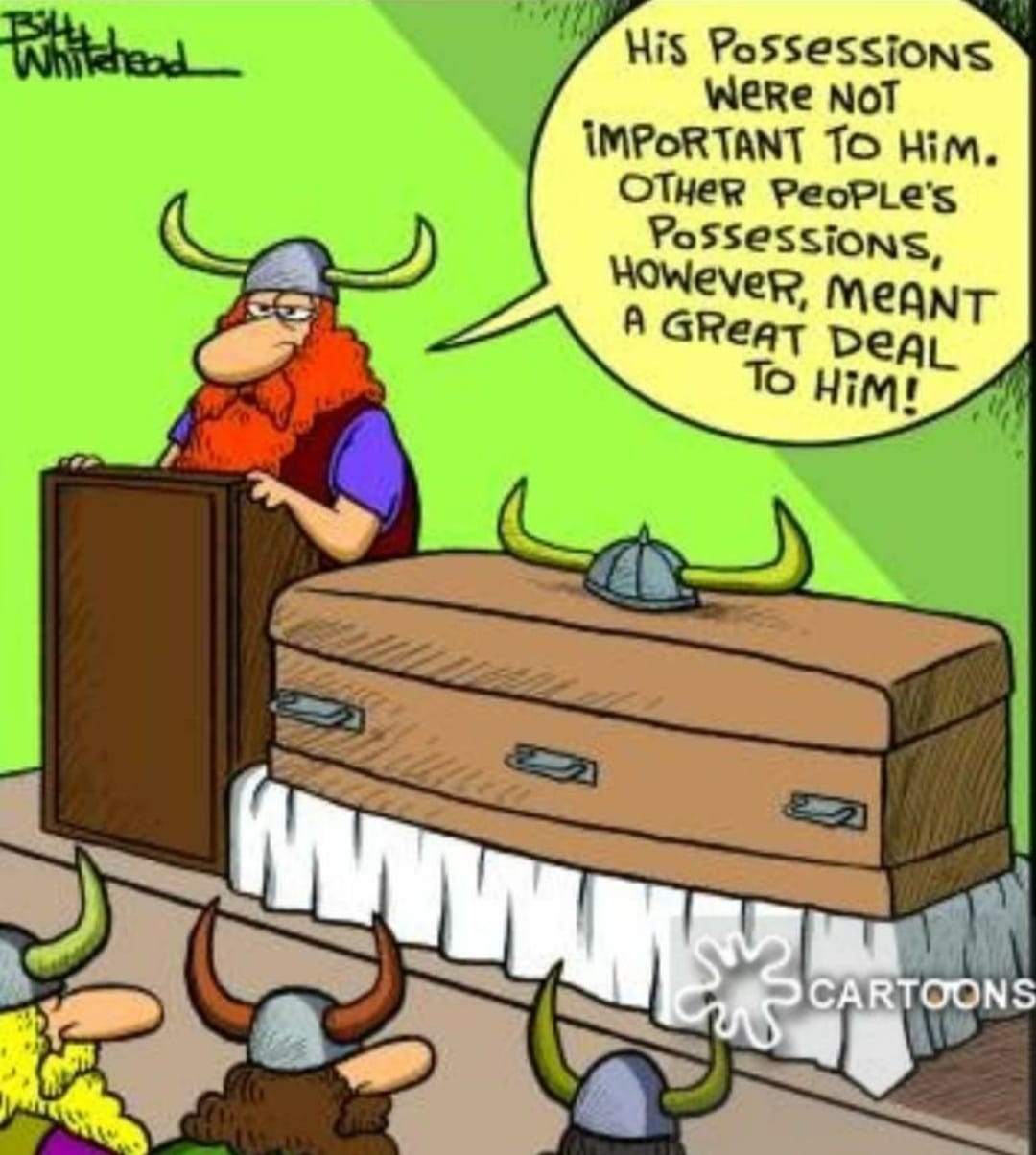