This Month in History (Narva)

Charles XII (The Swedish Meteor), shattered Peter the Great’s Russian Host during a snow storm at Narva in 1700. 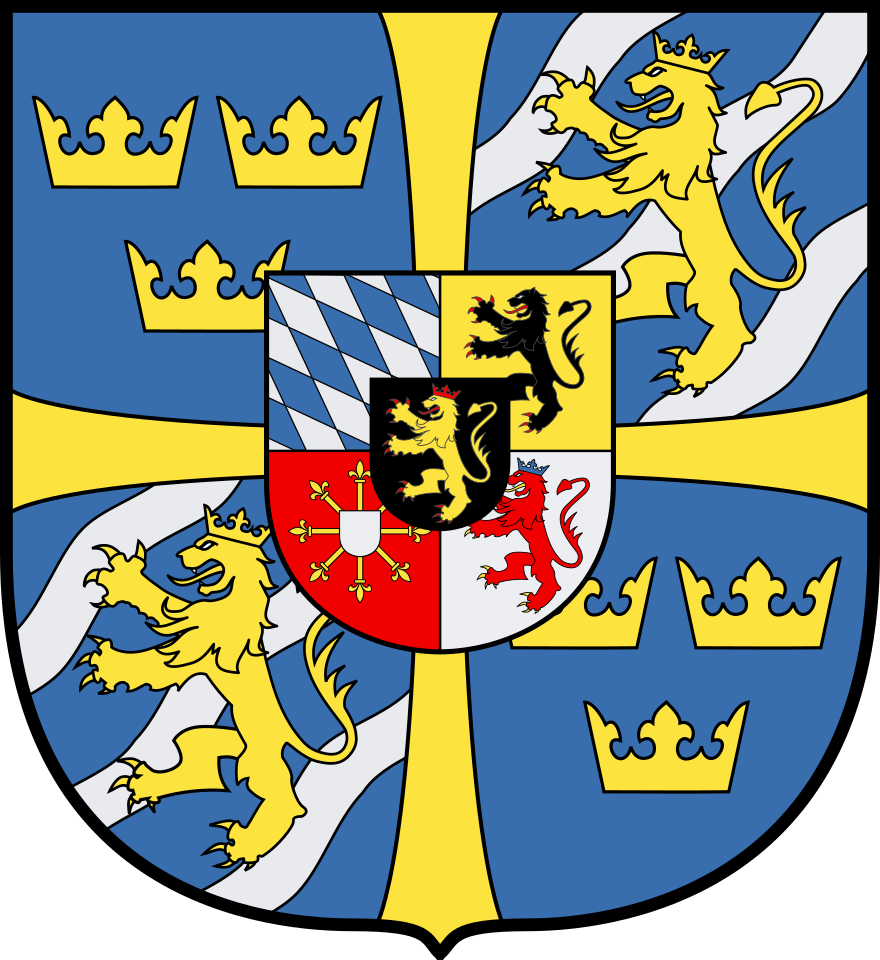 In the first major battle of the Great Northern War, Charles XII, Sweden’s erratically brilliant soldier king broke the Russian siege of Narva; storming the Russian entrenchments under the cover of a snow storm.

A coalition of Peter the Great or Russia, Frederick IV of Denmark–Norway and Augustus II the Strong of Saxony-Poland-Lithuania had sought to take advantage of the inexperience of Sweden’s new teenage monarch by attacking Swedish territory from three directions; initiating the Great Northern War.

While the balance of forces favored the coalition, Sweden was no easy opponent. It had been the dominant power in Northern Europe for nearly a century. Its empire controlled the Baltic, with possessions and fortresses on every coast. The warlike Vasa Dynasty had created and maintained a highly professional standing army of 77,000 men; with a strong territorial recruitment system. It was a balanced force of disciplined and well motivated infantry regiments, well supported by both light and heavy artillery. The Swedes had a long-standing reputation for military excellence; and were famed for their preference for cold steel at close quarters and rapid maneuver. The Swedish cavalry had a particularly high reputation for shock tactics; charging at a gallop with every trooper’s knee locked behind that of his neighbor. Charles forbid his troopers to use pistols in the charge; favoring furious charge with sword in hand.

Peter’s Russia was able to mobilize a larger army, but their mobilization system historically slow. Peter had created a modern army, hiring foreign professionals from the West to train and drill his regiments. However, the Russian troops were green, inexperienced, and the officer corps was rife with political appointments, favorites of the Tzar. Though ambitious for military glory, Peter was to show time-and-again an unwillingness to personally brave the terrors of battle.

The Danes invaded Holstein with 20,000 men, of indifferent quality. More were left guarding various fortresses along the Swedish-Norwegian border. Poland-Saxony together could mobilize at least 100,000 men; and the Polish cavalry was famed for its excellence (the famous Winged Hussars had saved Europe just a generation earlier at Vienna from the Turks). But the Poles were reluctant to leave their own territory; and their army as a whole had failed to keep up with western developments in tactics and firepower. 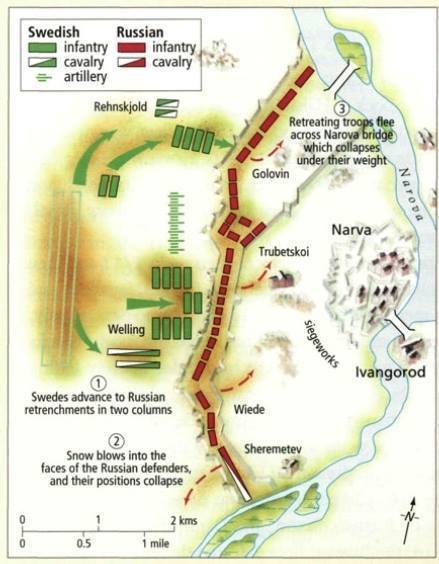 The coalition had sought to catch the Swedes unprepared and poorly led with a minor on the throne. The conspirators, however, didn’t count upon the furious energy and military genius of the 18 year old King Charles (Karl) XII.

Charles leaped into action; attacking his nearest enemy, Denmark, first. With the help of the Maritime Powers, England and Holland, a Charles landed on the island of Zeeland, and laid siege to the Danish capital of Copenhagen. The Danes rapidly capitulated in August, 1700, dropping out of the coalition (six weeks before Peter and the Russians had even crossed the frontier into Swedish territory).

Charles quickly ferried an army across the Baltic, marching to the relief of Narva with some 10,000 men and 37 guns. The fortress was invested by nearly 40,000 Russians and nearly 200 guns. The Russians had thrown up entrenchments in a wide arc about the fortress, the ends resting on the icy Narva River. 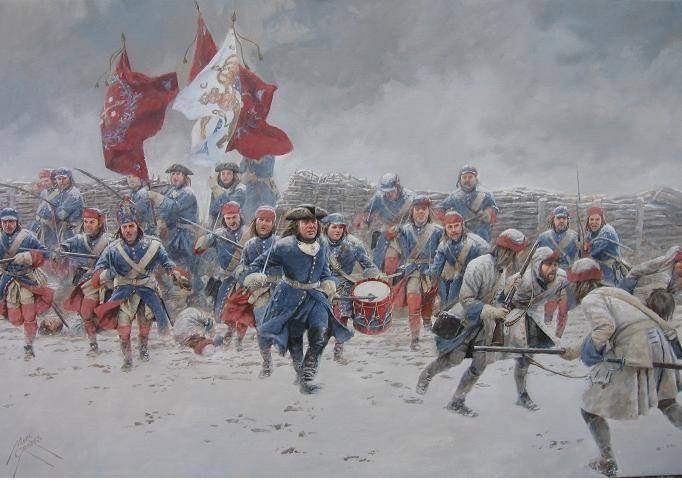 As news of Charles approach reached the Russian camp, Tzar Peter suddenly discovered a need to attend to affairs back home, and hastily deserted his army (Peter was widely mocked throughout Europe for cowardice following the battle). He left in command Marshal Charles Eugène de Croÿ, a soldier of fortune from the west; and Russian General Boris Sheremetev.

Charles reached the vicinity of the Russian lines and prepared to attack. With a blizzard blowing, his generals advised the king to wait till the weather cleared. However, with the snow at their back, Charles decided to attack. Reassured that no attack would be forthcoming in the midst of the storm, Croÿ and his officers sat down to lunch.

The Swedes formed up in storm columns. Their plan called for the cavalry, led by the King’s elite Lifeguard Regiment, the Drabants, to break through and gallop through the Russian camp, seizing the main bridge across the Narva; cutting off the Russian retreat of the Russian right and center (a pontoon bridge crossed the river behind the Russian left). Meanwhile, the blue-coated Swedish regiments would storm forward against the center of the Russian entrenchments with bayonet and pike (with their predilection towards shock/melee attack, the Swedish regiments retained a pike-armed element within their infantry regiments long after the weapon had been abandoned in the rest of Europe). 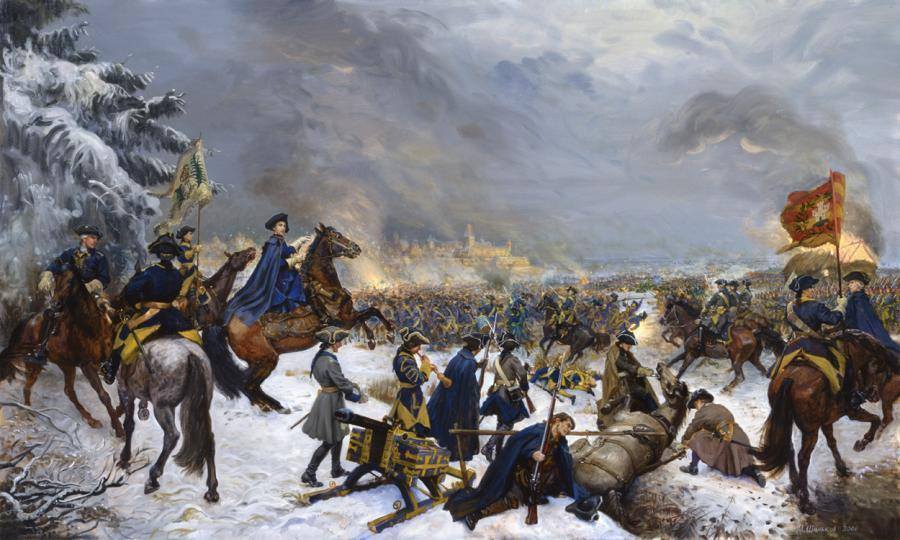 With the storm blowing in the Russian’s eyes, the Swedish columns were able to approach to within fifty yards of the Russian lines without being spotted. Surging forward they shattered the Russian line into three segments. Pressing home the assault with bayonet, the Swedes drove the Russians back into their camp.

On the Russian left, Croÿ ‘s cavalry mounted a spirited defense but was driven back. With the Swedish cavalry holding the main bridge, the fleeing Russian forces crowded over the pontoon bridge. Their weight proved too great, and the bridge collapsed into the icy river, drowning hundreds. 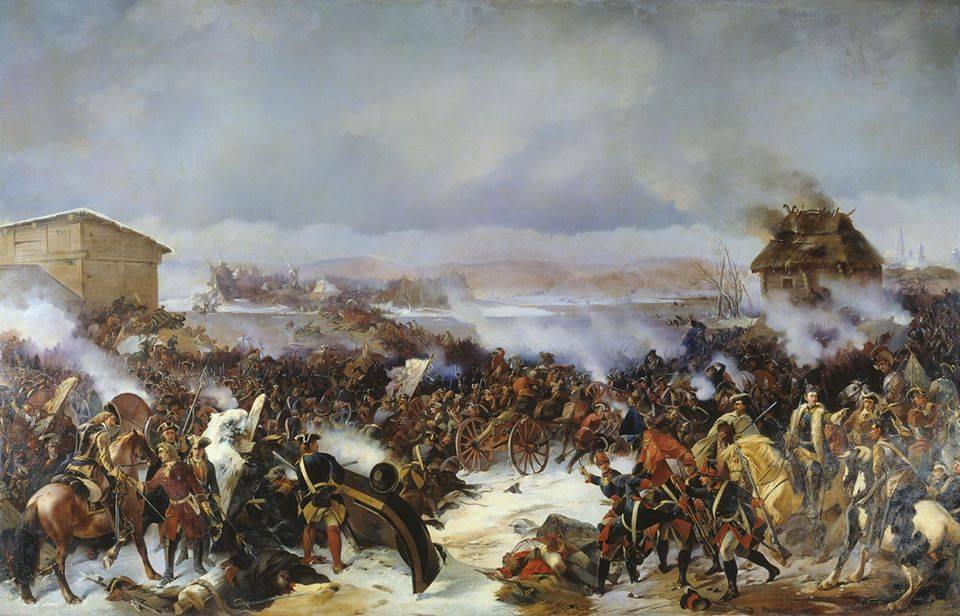 With the Russians trapped, the Swedes defeated the remnants in detail throughout the rest of the day. By the days end, the Russian army was utterly destroyed. 9,000 lay dead on the field; while Marshal Croÿ and 20,000 Russians were taken prisoner.

Charles XII had won a smashing victory. But with winter closing in Charles chose to march south against the Saxons at Riga; leaving Peter to rebuild his army. The Great Northern War would continue on for many years to come.