JANUARY 871: Elements of the Danish “Great Heathen Army” repulsed the Saxon assault on their base at Reading, England.

The first Battle of Reading was just one of a series of battles, with honors to both sides, that took place following the invasion of the Kingdom of Wessex by an army of Danes led by Jarls Bagsecg and Halfdan Ragnarsson; in an attempt to conquer the last remaining English kingdom in Britain. Both battle and campaign are described in the Anglo-Saxon Chronicle, and this account provides the earliest known written record of the existence of the town of Reading. 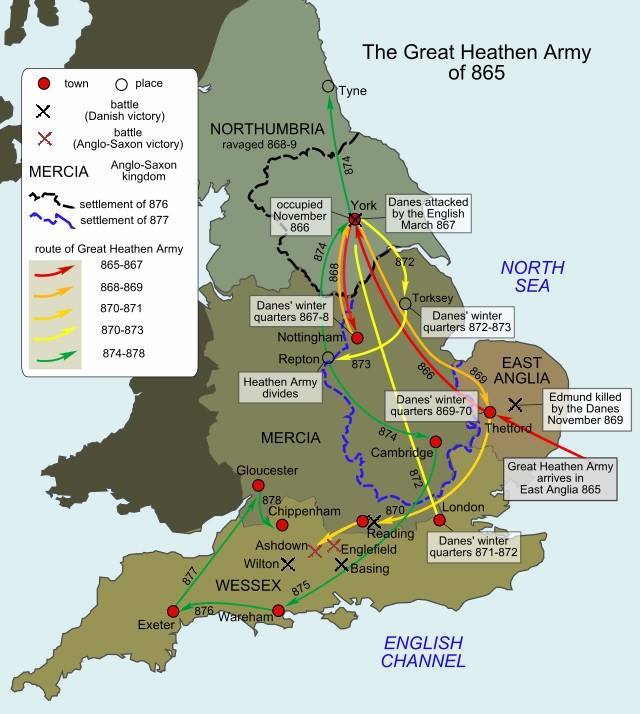 The “Great Heathen Army” came to England in 865, led by the sons of the famed Viking Ragnar Lothbrok. These were Halfdan, Ubbe, and their leader, Ivar the Boneless. (Two other sons of Ragnar, Sigurd “Snake-Eye” and Björn Ironside, may-or-may-not have accompanied the initial invasion.)

The Danes had been campaigning in northern France for many years, under the command of Ragnar or his sons. The army came to England (according to legend) to get vengeance for the killing of Ragnar by the Northumbrian king, Ælla, after Ragnar was shipwrecked and captured in the previous year.

Landing in East Anglia (one of the 4 English realms comprising “England”), the Danes negotiated a truce with King Edmund, allowing them to gather supplies and horses for a swift attack on Northumbria; which they carried out with great success. The Northumbrians were defeated at York, and Ragnar was avenged when Ivar carved the “blood eagle” on the back of King Ælla. York became the Danes’ base of operations for attacks against the rest of England (and, within a few years, Dublin as well) and remained in Danish hands, in one form or another, for most of the next two hundred years.

After the Danes conducted a successful raid into Mercia, East Anglia was next to feel their fury. King Edmund was captured and repaid for his earlier support with martyrdom. 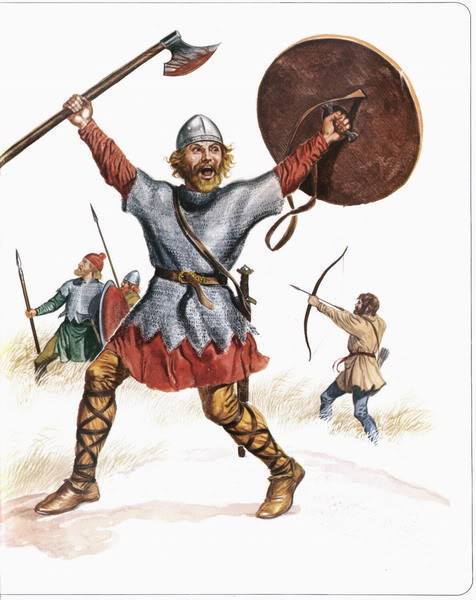 Mercia soon collapsed, its last king fleeing to France, and subsequently was divided into zones of influence between the Danes and Wessex.

In 871, reinforcements reached the Danes, replenishing their numbers (many of the original invaders had settled in Northumbria; or accompanied Ivar to Dublin, where he established a dynasty, the Uí Ímair, or House of Ivar). Under Halfdan Ragnarsson and a newcomer, Jarl (or “king”) Bagsecg, the Danes crossed the Thames and established a strongly fortified camp at Reading, defended by the Thames and Kennet rivers on two sides, and by a rampart on the western side.

Three days after their arrival, a party of Danes rode out towards nearby Englefield, where a West Saxon force under the command of Æthelwulf, the Ealdorman of the shire, was waiting for them. In the ensuing Battle of Englefield many of the Danes were killed, and the rest driven back to Reading. (Englefield, though a minor skirmish, was important in that it was the first time the Danes had been defeated by the English since the coming of the Great Heathen Army, and went far to dispelling the myth of their invincibility.)

Four days later, Æthelwulf had been joined by the main West Saxon army, led by King Æthelred and his younger brother, Alfred. The entire Saxon army now marched on Reading. The assault was directed mainly at a gateway through the ramparts, and fierce and bloody fighting followed, before the English attack was repulsed and the Danes put them to flight with a counter-attack. Among the many dead of both sides was Ealdorman Æthelwulf. The English were forced to retreat, allowing the Danes to continue their advance into Wessex.

Following the Battle of Reading, Æthelred and Alfred regathered their army, and a few days later won a famous victory at the Battle of Ashdown, forcing the Danes to retreat back to their base at Reading. Two weeks later the Danes won the Battle of Basing, and then, on 22 March, the Battle of Marton.

In April Æthelred died, to be succeeded by Alfred. The Danish army remained in Reading until late in 871, when they retreated to winter quarters in London, and much of King Alfred’s 28-year reign was taken up with trying to repulse repeated Viking incursions and contain and reduce the Danish conquests. His continued (and ultimately successful) resistance alone prevented a complete Danish conquest of England, and paved the way for a reconquista by his son and grandson. For this (and his patronage of the Church, of learning, and his programs of building) he is remembered as the only English monarch to bear the appellation “the Great”.

Further reading: Historical Fiction by Bernard Cornwell, Saxon Tales – The Last Kingdom, etc. is highly recommended if you have an interest in the period. There is also a mini-series out there (The Last Kingdom) based on the early books in the 12 book series. I know that many of this blog’s readers have read the books. They aren’t history per se, but they are meticulously researched and are close to history.