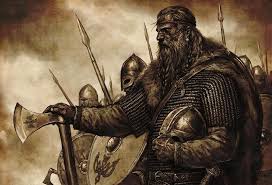 Michael Hirst’s selection of King Ragnar Lodbrok as the central figure for the History Channel’s television series, Vikings, is an exceptionally good one.
Ragnar raped, pillaged and plundered his way through the Early Medieval period the way men did when they “went Viking”. What set him apart, and ultimately made the historic Ragnar special was that he thought ‘out of the box’. As with all visionary men, there are two points of view. One is the Norse view of a heroic man who champions a new and faster type of ship (which became known as the Long Ship) and a new style of raiding warfare. The other is the people who he raided. They were not so enamored by Ragnar Lodbrok and his wife/shield maiden, Lagertha.
Hirst (thankfully) has followed history to the extent possible in recreating the world of 650 AD in Scandinavia and Britain. There are no men with horns on their helmets (a stupid myth about Viking armor that persists) and the hardscrabble earth that drove the men to look elsewhere for wealth is accurately portrayed.

Ragnar Lodbrok (Travis Fimmel) and Rolo (Clive Standen) have a certain degree of tension as brothers often do. Rolo covets Ragnar’s visionary nature and his beautiful first wife, Lagertha (Katheryn Winnick) and his loyalty isn’t always steadfast, but as with Ragnar, he’s a solid warrior. Jarl Haraldson (Gabriel Byrne) is the ‘current’ king of the region when the series begins and he fears Ragnar Lodbrok’s visionary nature, counseling him to remain on his farm and go with the flow. When Ragnar doesn’t follow his lead, Jarl Haraldson does something about it.

The acting is lifelike and appears effortless because it’s being managed by true professionals. The writing and set design is very solid and is accurate down to fine details.

I rate Vikings a MUST SEE.

Additional Post. The series’ first season ended with conflict brewing and I can only hope that the producers plan on a full season next year instead of the short 9 week run that this one had. Based on the reaction that I’ve been hearing, there is no reason that it can’t go 13 episodes.

We know that the historic Ragnar had as many as three wives including Lagertha and Aslaug (Alyssa Sutherland), introduced in the Season Finale and Thora Town-Hart, who we haven’t met on the series yet. Katheryn Winnick and Alyssa Sutherland are two of the most beautiful women in Hollywood and casting Thora will be an effort is she is to keep up with the first two.

The Historic Ragnar’s wives bore him many sons who fought and raided along side King Ragnar and carried on his tradition after his death. There is a lot of fodder for a long and interesting run for the History Channel if they’re willing to do it.

I applaud the inclusion of Donal Logue as King Horik. He’s a solid actor whose work has not received its just accolades in my opinion (I was disappointed when the series Terriers was canceled). His distinctive acting talents will only serve to enhance this series (until Ragnar becomes King).