The Value of Leadership The oil painting below shows the scene where a French picket/sentry awakes with horrible, consuming guilt, and not a little bit of fear. He had fallen asleep, having been posted as a sentry to keep watch upon the outlying areas of the deployment of La Grand Armée. The boss showed up and is holding his musket. 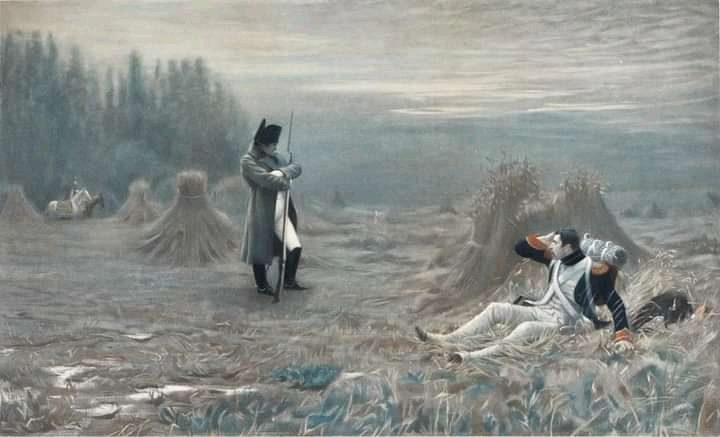 It represents a scene from the 1809 Franco-Austrian War. Austria, prompted by offers of British subsidies, was coerced by the hawkish factions at Court to take advantage of Napoleon’s absence in Spain, and strike into Bavaria and southern Germany.

The Hawks at the Court, and the British, were convinced that the Germans would rise up in popular revolt against the French, and achieve an easy victory against the Little Corporal. No such thing occurred.

The Tyrol revolted, but it was a traditional Austrian possession severed by treaty following defeats at the hands of Napoleon. There were a few minor uprisings elsewhere, nowhere even approaching a large minority of the people, let alone a popular mandate.

Until 1812, the Confederation of the Rhine was very popular with the German people, and especially amongst Protestants who loathed being under the titular authority of a Roman Catholic Emperor in Vienna under the auspices of the Holy Roman Emperor.

Instead of a popular revolt, and an easy victory, Napoleon’s German allies, and the few French forces in the area (the Austrian buildup was impossible to conceal, so the French began massing forces in southern Germany just in case, so the Austrian offensive was not a strategic surprise, but an operational one) fought like tigers, it denied the Austrians any victory at all, let alone an easy one.

The Bavarians were no longer keen on being under Austrian hegemony and preferred that of the French to their fellow Catholic Germans. Napoleon was already on his way, with the bulk of his Grande Armée, and a reckoning was soon to follow.

Back to the painting.

The sentry had just awoken to see. his very own Emperor, glaring hotly at him, standing watch, doing the duty that was given to him, a common soldier,  and holding his musket.

Napoleon, as was his want (the man functioned amazingly well on little sleep), awoke well before dawn and made a personal reconnaissance of his outposts. (management by walking around)

The Emperor, himself a former soldier, despite his station, was most comfortable with the men in the ranks, and the junior officers. This personal attention, unheard of by most other monarchs of the period, was why Napoleon was, and still is, so universally admired by even non-French.

By rights, by all the legal rules of warfare, the man could have been shot, justifiably executed, with not a shred of mercy by Napoleon. And certainly, Napoleon, and everyone else, did have those who were derelict, executed at times.

Napoleon knew a key to motivating men that those born in a high status, out of touch with the reality of the common man, all too often failed to comprehend. And this was the almighty power of shame.

“Get up you fucker!” The Emperor ranted harshly at the trembling man. (No, he really said that. In “How Far From Austerlitz” by English historian Alistair Horn, Horn relates numerous accounts of Napoleon’s common man approach with his men).

Napoleon began a dressing down that would have made any Parris Island D.I. tear up in joy. After the obligatory insults to the man’s intelligence, ancestral legacy, and the judicious use of the very military term “fucker”, Napoleon began to steer the tirade towards his point.

Shaming the man into, from then on, doing his duty to the utmost. By reminding the man that he had such a simple, yet vital, to fulfill the role, and that his rest had put all of his comrades at risk, Napoleon implored the man to comprehend that a sovereign of an entire Empire had to, for some time, stand watch as sentinel, while a young soldier slumbered.

Convinced the man would not fail him again, and not wanting to lose a man to a mistake that, while certainly severe with its implications, the Emperor was convinced that he could learn from it, he approached the man.

The Emperor handed the young man his musket, cuffed him hard on the back of the head, and then gave the man’s shoulder a quick, affectionate squeeze, and asked the man if The Emperor should expect to stand guard for a second night.

Profusely the man said no.

Napoleon pinched the man’s cheek as though he were the man’s uncle, and then went back to his personal reconnaissance.

By all accounts, that man performed heroically on the field in numerous engagements and was promoted.

Where others may have had the man placed in front of a firing squad for his offense, and been justified in doing so (Wellington and Frederick the Great both did), Napoleon’s relationship to his men was more akin to that of Stonewall Jackson and his men, or Alexander Suvorov and his men.

Napoleon was a father figure to his men, his leadership style was very paternalistic. And a father disciplines his boys, at times harshly. But he never destroys them when they can learn a lesson and be better men for their temporary pain.