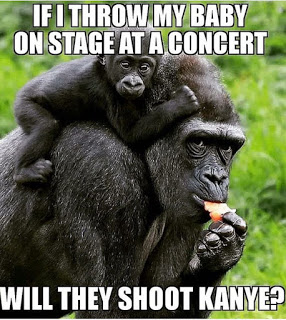 The tragic death of Harambe, the monkey in the Cincinnati Zoo was not mentioned in the first presidential debate between Clinton and Trump, but that doesn’t mean that they forgot him. Or does it?
(National Review) Clemson University Bans ‘Any Reference to Harambe’ From Dorm Spaces Because of ‘Rape Culture’ and ‘Racism’

A Clemson University administrator has demanded that any and all references to Harambe be removed from the public spaces in its dormitories because of concerns about “rape culture” and “racism.”

“Due to an incident that happened earlier this week, we are no longer allowing any reference to Harambe (or any other spelling) to be displayed on doors, halls, billboards, or windows,” an administrator stated in an e-mail to resident assistants, a screenshot of which was leaked to Campus Reform. “Essentially, Harambe should not be displayed in a public place or a place that is viewed by the public.”

“If residents are asking why they have to take them down you can share that there was a report from an individual about a meme being offensive and bias [sic] in nature and as a result all Harambe references are no longer allowed within our community.”

In an e-mail responding to a student’s question about the policy that obtained by Campus Reform, Graduate Community Director Brooks Artis explained that “there have been reports that he and the incident surrounding his death have been used to add to the rape culture as well as being a form of racism.” 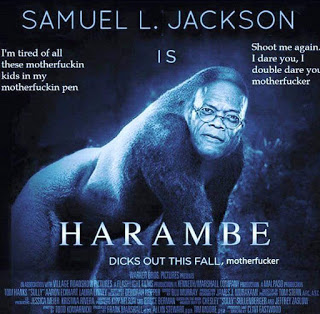 I don’t know how a reference to a long dead gorilla promotes a rape culture. Maybe the readership could/would be so polite as to enlighten me.
The phrase “Dicks out for Harambe” was one that I was unfamiliar with. I had to look it up on the Urban Dictionary –
“The act of pulling your dick out of your pants as a sign of respect for our nigga Harambe

“Show some respect you insensitive fuck; dicks out for Harambe.”
So if I get this right, Afro-American males have been pulling their dicks from their trousers as a sign of love for a fallen brother? Somehow that makes perfect sense to me…what’s wrong with me?