The Search for Extraterrestrial Life

Enceladus has stripes and it’s off-gassing water ice into the Saturn’s e-ring that are packed with complex hydrocarbons based on recent revelations from the Cassini probe, published in various journals. 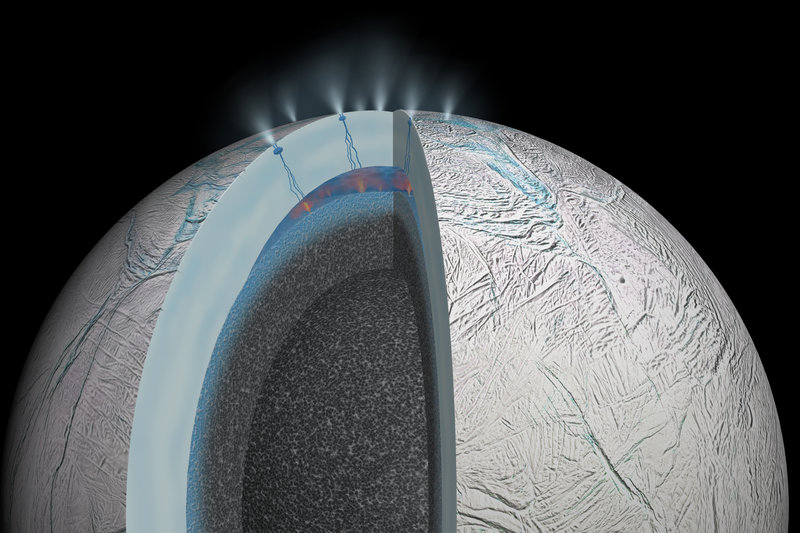 That doesn’t mean life is present, but it does portend interesting processes in the heated interior of Enceladus’ salt water oceans.

Europa (a much larger moon) orbits Jupiter with the same sort of profile, but nobody knows if the two interiors are alike, warm, liquid, mineral rich, water notwithstanding.

SETI has been a disappointment, but they were looking for intelligent life. The search for extraterrestrial life is very different and can take place (relatively close to home).

“Enceladus discoveries have changed the direction of planetary science,” said Linda Spilker, Cassini project scientist at NASA’s Jet Propulsion Laboratory. “Multiple discoveries have increased our understanding of Enceladus, including the plume venting from its south pole; hydrocarbons in the plume; a global, salty ocean and hydrothermal vents on the seafloor. They all point to the possibility of a habitable ocean world well beyond Earth’s habitable zone. Planetary scientists now have Enceladus to consider as a possible habitat for life.”

The question is whether humanity can keep its act together long enough to go out there and take a closer look at things.