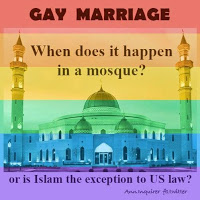 Today America (pandering to the aggrieved) is busy creating protected classes of people who enjoy certain exemptions from responsibility. Recently we’ve learned homosexuals have the entitled right to force others to pander to their sexual appetites, and ‘preferences.’ It has become the new normal – when it applies to Christians (only).
Is being Muslim a choice or is it something you were born to be? The jury is (literally) out on that one and I will leave that decision to black robed mandarins to decide on my behalf.
However your conscience lets you slice it, right?
Is homosexuality/buggary, a choice or is the decision to sodomize or be sodomized a compulsion that is inborn? Every generation seems to redefine it and the generations don’t  agree.
When homosexuals persecute Christians it’s fine.
But what about the 800 lbs. burka in the corner? 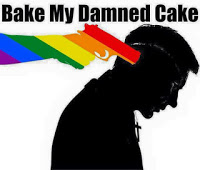 What if you were born to be a Nazi and being a Nazi imparts a sense of “dignity” (to quote Justice Kennedy) to you? You’re white, people kick you around – but once you’ve joined a group of like-minded jackbooted thugs, you feel more dignity. You find a woman that you love and want to marry and create little national socialists. And that sense of dignity requires that your Nazi wedding cake is made by Jews (who will certainly spit in the cake batter). Should the Jewish bakery be compelled to recognize and celebrate your union?
Tomorrow’s blog will go into what the new right of dignity may mean to you.

And as a side note, I have never seen so many Confederate flags being flown on Independence Day, as were in evidence yesterday. Keep in mind that I live in Southern California, not in the deep South. It seems that there were a lot of people who decided to express themselves. I don’t live in a part of SoCal that has a lot of inner city people in residence, but there is a mosque across the street from the regional park.

It’s a traditional Republican enclave with a Republican Congressman. Then again, the people flying the flags may have been Democrats just trying to relive the glory days? They were flown from pick-up trucks and were flying at the regional park where we gathered for a concert and fireworks (about 20,000 people).

There were at least double the number of Confederate Battle Flags of Northern Virginia to the number of American flags present. Business is good for flag companies, thanks to Barack and friends. They’re doing the same thing to the Confederate flag business that they did for the firearms and ammunition manufacturing businesses.