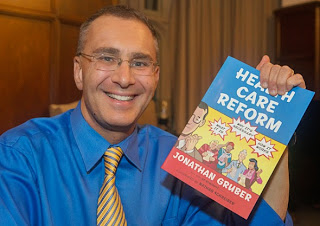 Healthy people pay in, sick people get money. It’s income redistribution in the form of a tax. MIT Professor Jonathan Gruber explains how frigging stupid the American people are and how he, the principal author of Obamacare, lied and manipulated to get the bill into law.
Gruber’s lies are right up there with Obama’s oft crowed duo of whoppers: If you like your doctor, you can keep your doctor, PERIOD. If you like your health plan, you can keep your health plan, PERIOD.
The US Government (which means you) paid this greasy political hack $400K to write the Obamacare law. And now, we’re stuck with it for the present.
When Gruber’s statements about how frigging gullible and stupid Americans are surfaced, the Obama Administration and Presidential hopeful, Hillary Clinton went silent and their office lights were turned off. I’m sure that they’re confident that stupid Americans will forget and that it will all blow over by 2016. They’re probably right.

I’d like to include clips from CNN, ABC, NBC and CBS, but none of them carried the story. I’m sure that they feel that it’s not ‘newsworthy’.

Nancy Pelosi claimed Thursday she didn’t know who ObamaCare architect Jonathan Gruber is, after several tapes surfaced showing him gloating about how the law was written to take advantage of the stupidity of the American voter.

Problem is, Gruber’s analysis of the law was cited extensively by her office back in 2009.

Pelosi, the House Democratic leader, tried to downplay Gruber’s role during a press conference on Thursday. She claimed she doesn’t know who he is, and that he didn’t help write the law. “Let’s put him aside,” she said.