It’s mean to poke fun at somebody like John Fetterman, who suffered from a stroke that left him significantly impaired and in a situation where his cognition may be roughly on par with Joe Brandon. The question of where he was in terms of raw capacity before the stroke is something that I can’t answer but the consensus remains that while he was a dim bulb before, he’s dimmer now.

Fetterman’s opponent, Dr. Oz was accused of engaging in a battle of wits with an unarmed man during the debate, but Fetterman wants to sit in the US Senate and he’s cognitively impaired. Democrats point out that being somewhat less capable than a potted plant didn’t keep Joe Brandon from serving as the US president. Who can argue that one? The Democrat Party promised to have handlers present to manage John Fetterman if he becomes a US Senator and to tell him how to vote. 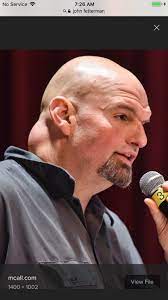 Former President Obama endorsed Fetterman, saying that he needed a teleprompter to be able to speak during his 8 years in office. How is that different than Fetterman’s apparent need?

John Fetterman’s medical condition post-stroke and the massive growth on his neck, which he hides usually by wearing a hoodie are said to be on par with many US Senators who have difficulty walking and chewing gum at the same time. The editorial staff at Virtual Mirage is forced to agree with the argument posited by Fetterman’s army of handlers.