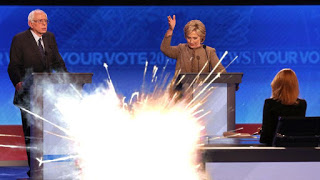 MIAMI—Surreptitiously grabbing the explosive device stashed inside her lectern and pulling its pin as soon as she heard moderator Jorge Ramos mention her support for the Iraq War and the Wall Street bailout, presidential candidate Hillary Clinton reportedly threw a flash grenade onto the stage during Wednesday night’s Democratic debate to divert attention away from a question about her Senate voting record. “That’s an important question, Jorge, and one I’m happy to answer,” said the former secretary of state just as the military-grade M84 stun grenade exploded, emitting a deafening blast and blinding flash of white light that prevented anything on stage from being seen or heard for the duration of Clinton’s answer. After cowering with their hands over their ringing ears for approximately 70 seconds, rattled audience members, the debate’s moderators, and fellow candidate Bernie Sanders were said to have regained their vision and hearing just in time to make out the final sentence of Clinton’s response: “And that’s why I’ve always stood on the side of the middle class and working families.”

I’m trying to source this, but allegedly, Hillary Clinton has told reporters that even if indicted by the Department of Justice, she would continue her run for the presidency. No, I’m not kidding. And perhaps she isn’t either. We know that Hillary feels that it’s her turn to be leader of the free world, and she will not allow it to be taken from her.
Washington DC Mayor Marion Berry won re-election even after a video surfaced of him using illegal narcotics and after his arrest for same.  It’s possible that Hillary could receive a Presidential Pardon and continue to be the Democratic Party’s nominee. Wasn’t there a crazy dope smoking felon who was mayor of Toronto, Canada or something along that line? There are precedents, just not at the Presidential level.
I’m confident that she’ll be held to account, will be charged and will face trial, but I’m not all that confident that it will change the election. Things have slipped that far.