The Bronze Frog (A Book Review) 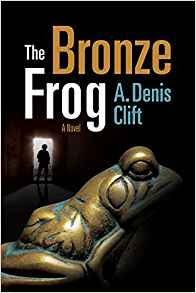 As a veteran of large and small wars as well as joint special operations activities with allied nations, I find it difficult to choke down many of the books written about SEALs. They are not super men, they are not bullet proof and not all survive the Byzantine world of intelligence agencies and national agendas that they are fitted into in order to try and arrive at some semblance of an ‘acceptable’ solution that may be justified in one presidential administration only to be later excoriated. The game is hard, the bureaucracy unforgiving and the environment is almost always hostile. (human jungle far worse than the actual one)

Thus I entered the world of The Brass Frog with some trepidation. A. Denis Clift, a former naval officer and intelligence official/bureaucrat had two books under his belt A Death in Geneva and With Presidents to the Summit before he embarked on The Brass Frog. This was not his first rodeo and he was a naval officer and Editor-in-Chief of Proceedings magazine. Knowing how to write doesn’t mean that you can be a successful novelist, though. Mr. Clift clearly knew how the system worked, but the question in my mind was whether or not he knew how SEALs thought and how operators worked.

Sometimes it’s important to understand what rules you’re able to bend and which rules you’re able to break. Bureaucrats don’t always grasp that fully, but from my reading, Mr. Clift seems to.
Intelligence officers manage recruited human assets who commit espionage in varying degrees. Some are witting, others are not. The tradecraft involved in these efforts can be tricky and let’s face it, lives of these agents, these assets, are sometimes forfeit for any one of a number of reasons.
SEALs are not like green berets. They are not force multipliers. They are not like intelligence officers. They are by their very nature, instruments of direct action. Though it doesn’t happen every day, they kill people for a living. Kinetic war is what they train for in a generally maritime setting, though operation in littoral regions is clearly not an absolute.
When you blend the two (and sometimes they just don’t blend), you have an operator whose capacity includes sensitive intelligence collection and tradecraft, foreign espionage and sabotage, counter-terrorism, infiltration, information exploitation, management of asset identification, recruitment, and development in operational settings.

Welcome to The Bronze Frog.

About the Book: It’s fiction but there is an underlying concern of the reader that it may not be entirely so.

Commander Linc Walker, a sharp, combat-seasoned SEAL is on a clandestine mission against the People’s Republic of China when he is betrayed by leaders in The White House. Forced to retire, Walker learns that the President’s National Security Adviser, a fellow Stanford graduate, together with the National Security Council’s China expert, gave the orders blocking a submarine’s scheduled recovery of he and Chief Gunner’s Mate John Hall (who succumbs to injuries and dies). They alone are responsible for Hall’s death—traitors in Linc’s eyes.

The Bronze Frog plot is Linc Walker’s plan for revenge. It’s a dish best served cold, and the meal is  highly recommended to anyone who is interested in seeing how the story will play out.

“You’re getting the feeling now, aren’t you, president’s man? Unable to move, everything ebbing away, and still somewhere in that brain the hope that help is on the way.” (p. 261)