As an armchair admiral, I’ve been playing what if with the Falklands War of 1982. Having mountains of hindsight, it’s easy for me to win by taking either side and while the British won, it was not a foregone conclusion. They had the better fleet and the better submarines, but the loss or heavy damage to one or both British Aircraft Carriers on May 1-2, would have lost them the war.

At minimum the conflict would have been longer, and the Royal Navy would have needed to get the new carrier Illustrious rapidly into service, or even re-commission the Bulwark, a commando carrier that had recently been paid off (this was examined at the time but considered too time consuming and costly).

If the Argentine Navy had gone all in with its British-built light aircraft carrier ARA Veinicento de Mayo task group. Had they launched a strike on the British as planned, and had the Argentine escorts fired their twenty Exocet missiles at the British battle group as planned, the odds of hits was good.

We know the submarine HMS Spartan was in contact with the Argentine carrier and had been denied permission to attack on the 1 May. If ARA Veinicento de Mayo had launched a strike package, there’s little doubt that the Spartan would have torpedoed her, but the strike would have been airborne. The loss of the Argentine carrier would be significant, but if they would have succeeded, the British amphibious fleet could not have landed troops and supported them in light of effective Argentine land-based aircraft attacks.

The British operation to retake the Falklands was very high risk and ran against the clock.

This can be discussed in great depth and I’m not doing that here. My point, if there is one, is that holding back and not attacking, and saving the navy can mean losing the war as surely as using them boldly (and maybe carelessly). 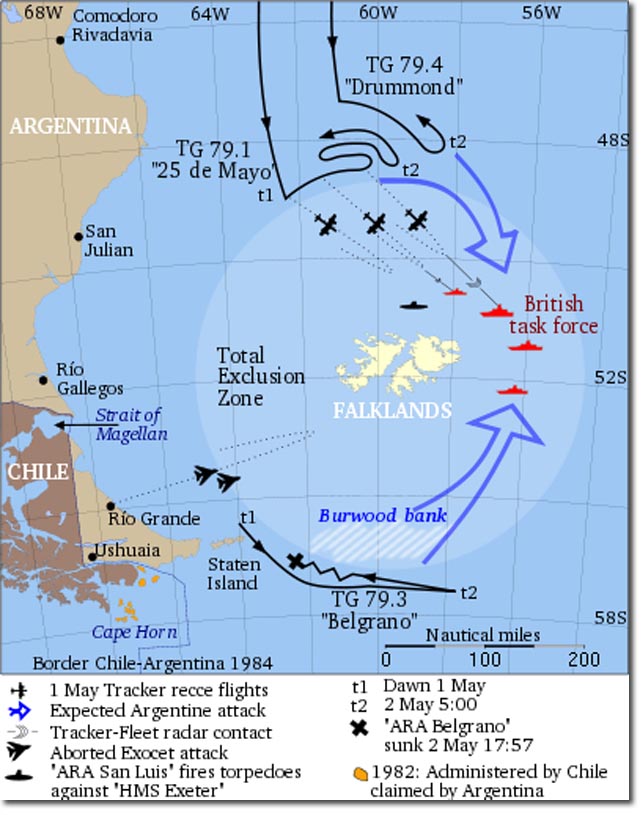 In 1998, Canada purchased the submarines to replace their aging Oberon-class submarines. The troubled history of Canadian submarines is a very open secret and is detailed here: “The Saga of This Long-Busted Submarine…”

Canada might consider purchasing submarines that could operate under the ice, because so much of its territorial waters are icebound at least half of the year. In practical terms that would mean nuclear propulsion and the word “nuclear” is almost a swear word in Canada.  When you consider the sad state of Canada’s submarines, they’d be money ahead to scrap them and just pretend to have submarines.

In 2015, the Canadian Navy lost its area air defense capacity and its underway replenishment capacity, which has nothing to do with the problems that they’re having with their submarines. Canada hopes that the US will defend their interests at sea against foreign aggression. And when you visit Vancouver and see how many Chinese people (non-English/French speaking) live there, you might be inclined to deduce that the invasion took place already.