Are you tired of tanks yet? 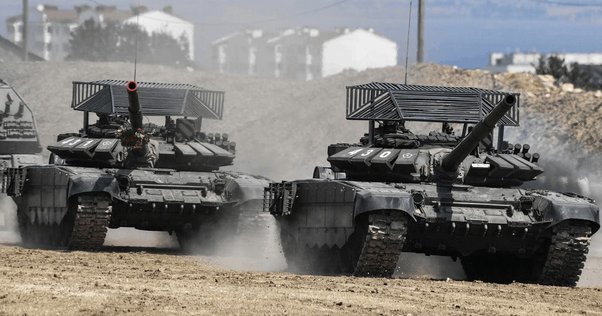 The latest in passive Russian armored defensive measures…a cage over the top of the turret. Do they work? The Russians would seem to think that they do. 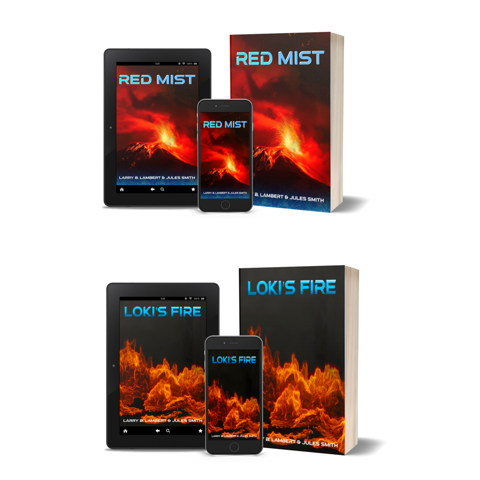 Loki’s Fire,  coming soon, just in time for your

I’ve heard a lot of criticism of the T-72. Some of is fair and some is not fair, so let’s delve. When the T-72 first rolled out, it faced the American M-48 or M-60 Patton. The M-1 Abrams were not present in significant numbers until 1982.

The T-72 Faced the American M-1 Abrams for the first time in the First Gulf War (Operation Desert:  Shield/Saber/Storm) and they didn’t face Russian armor, they faxed T-72 export armor for the most part. The export T-72’s were designed to be inferior to Russian armor so that if the Russians faced their own equipment, they’d prevail. 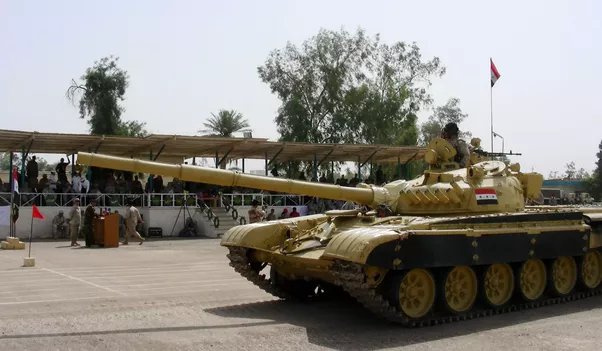 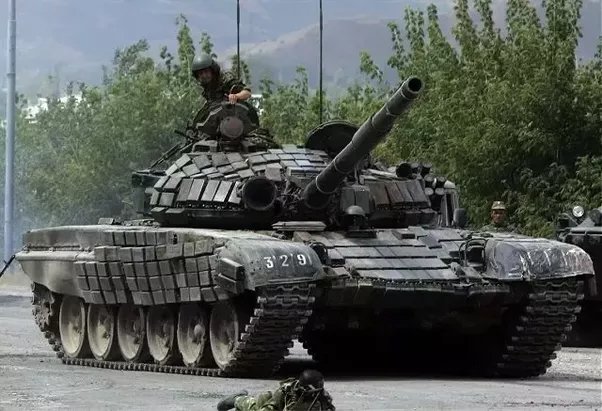 There are differences between the two models showcased above. The most noticeable difference is the lack of Kontakt-1 Reactive Armor bricks on the Iraqi export version.

Export T-72s didn’t have composite armor. Their armor was flat steel, with no laminate inserts. The actual maximum armor thickness of 300mm was the practical thickness of 300mm RHA. The Lion of Babylon and T-72M1 variants less common among the Iraqi ranks had additional applique/composite armor on the upper glacis and turret fronts, but ultimately this wouldn’t make a big difference to the contemporary Russian and American APFSDS penetrators.

Even the 25mm Bushmaster APFSDS round from the M2 Bradley, which had a penetration of 100mm RHA and was intended for use against light armored vehicles and helicopters, was able to destroy Iraqi T-72s.

Russian T-72s of the comparable era had ceramic rods inserted into the turret armor. These strengthened the armor against impact, decreasing weight while adding effective protection. Russian T-72s had a practical thickness of 540mm of RHA vs APFSDS with the Kontakt-1 ERA. The Iraqi APFSDS rounds would have no effect on Russian T-72s and had none on the Abrams.

The Iraqi T-72’s electric turret rotating mechanisms were worn out from constant use, desert environment, and lack of maintenance, causing many crews to have to manually crank the turrets; the optics were inferior and they had no thermal vision, (The Russians called them “monkey” tanks for a reason).

The big problem with the Iraqi T-72 wasn’t the tank; it was the ammo. Russia exported APFSDS rounds for the 125mm gun-but the penetrator rods were made of soft steel instead of tungsten or depleted uranium. They had a penetration capability of around 250mm of RHA, not enough to pierce the frontal armor of a Russian T-72, let alone an Abrams.

Contemporary Russian APFSDS rounds were made depleted uranium (or tungsten)-nickel-iron alloy, and could penetrate between 450–650mm of RHA, depending on the variant.

These rounds are capable of penetrating the frontal hull armor of the Abrams in places.

The second problem with the Iraqi T-72s was the crew. They were poorly trained, much worse than Russian tank crews. Additionally, the tanks were horribly maintained, since they had been on the move through the desert for months prior without receiving proper maintenance. Spare parts were in critical shortage.

All in all, Iraqi T-72s were technologically 20 years out of date. Their main force weren’t even T-72s, only the Republican Guard and Saladin divisions used them.

They were facing a force equal in number of practically brand new M1A1 Abrams, operated by well-trained crews.

Their tactics were bad. The Iraqis decided to “dig in” all of their T-72s. 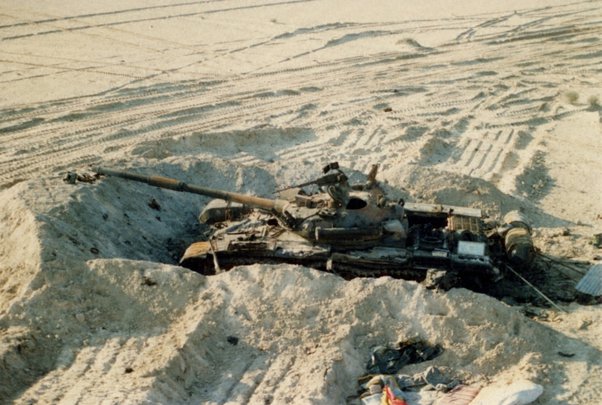 You can see just from this image that whoever dug in this tank didn’t seem to think that it would need to fire. The main gun was still elevated and not on target when it was destroyed. Their armor was so bad that the APFSDS rounds of the Abrams could penetrate through the pile of sand and still destroy the tank.

Additionally, the optics of the Iraqi T-72s were inferior to the Abrams’ thermal optics, and many were also damaged or rendered useless by the harsh desert conditions. Many of them simply couldn’t see any Abrams to engage. They were literally sitting ducks; as good as target practice.

Whoever was in charge of the Iraqi tactics did not think this through at all. 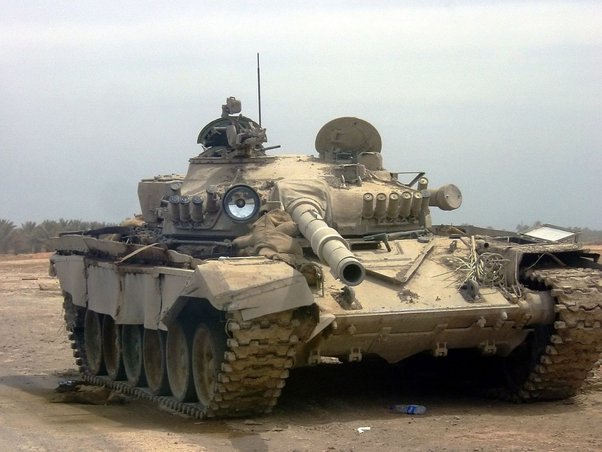 The crew of this “Lion of Babylon” did the smart thing and surrendered.

Russian tactics stressed mobility. Had they been in charge of planning a defense like this, they would have kept all of their tanks mobile. A small division of T-72s would be positioned in front of the Abrams and Bradleys, while two larger formations would flank the attacking formation in a pincer movement, and strike their weak sides while they were engaging the first division.

(Zulu horns of the buffalo attack)

If the Abrams had faced a proper Russian division of T-72s at 73 Easting, the outcome would be pretty indeterminable. Russian tactics differed vastly from the Iraqi tactics, most of the Iraqi tanks weren’t even T-72 export models- They were Chinese Type 69 export models, copies of T-55s.

The Russian T-72 is still an inferior tank to the Abrams, but this is compensated for with its low cost, simple mechanical complexity, and good trainability. Admittedly, they do have a nasty habit of cooking off and killing the crew, but upgrade kits should mitigate danger of penetration. Most of the penetrating hits that are capable of detonating the ammunition would kill the crew anyway.

The Russian T-72 is still a decent opponent when upgraded with the latest Relikt reactive armor, better optics and ammunition. Some T-72s have even received the “Arena” Active Protection System Package, something that very few Abrams have.

The T-72 is much more susceptible to “cooking off” if hit, because its two-part ammunition is stored directly below the turret ring, practically inside the crew compartment. If hit by a penetrating shot, the ammunition tends to explode and blow the turret off in a spectacular fashion, killing the crew. This happened quite a lot. 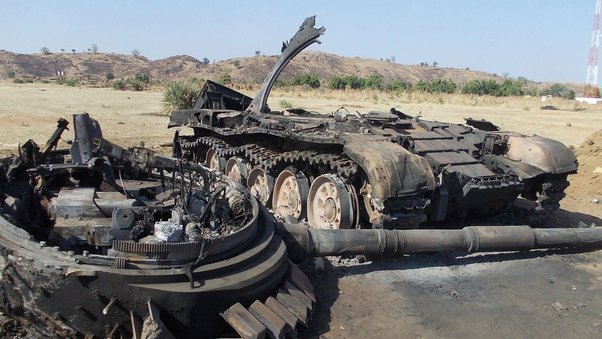 Is having 4 T-72s for every Abrams, price-wise, a fair trade? Some would say that quantity has a value all its own.

(below) Modernized T-72B3s in service with the Russian Army.