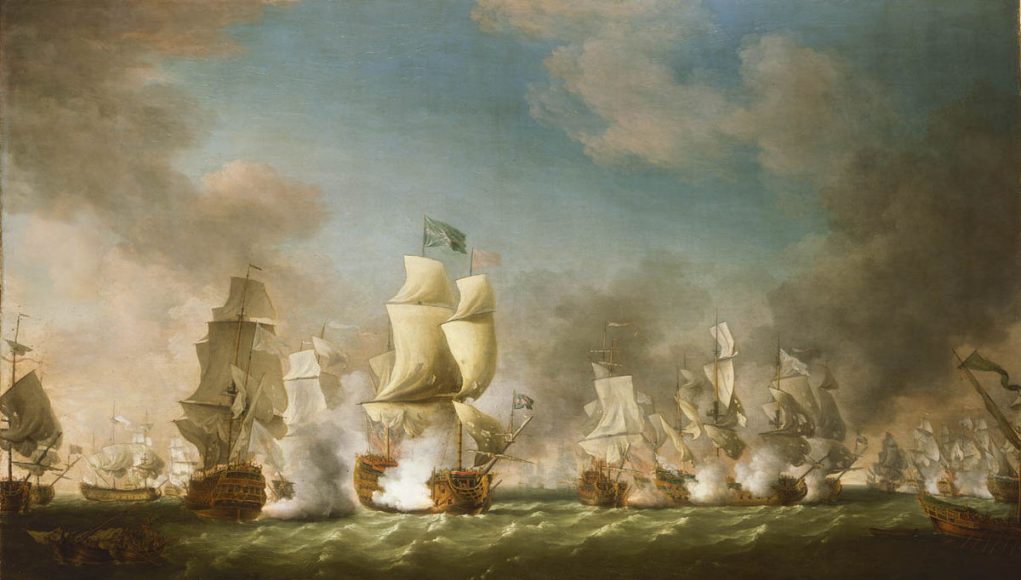 This is part of a larger article …here, from the Smithsonian.

One day in 2015, the magnetometer picked up metal that turned out to be an iron cannon; when the divers blew the sand away, they also discovered a more precious bronze cannon with markings indicating French royalty and, not far off, a famous marble column carved with the coat of arms of France, known from historical engravings and watercolors. The discovery was cause for celebration. The artifacts indicated the divers had likely found the wreck of La Trinité, a 16th-century French vessel that had been at the center of a bloody battle between France and Spain that changed the fate of the United States of America.

And then the legal maelstrom began, with GME and Pritchett pitted against Florida and France. 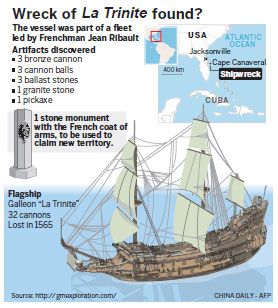 “La Trinité is a ship tied to the history of three nations—France, Spain, and the United States,” explains noted maritime archaeologist James Delgado, the senior vice president of SEARCH, a U.S.-based cultural resources organization with offices in Jacksonville, Florida, and a specialty in archaeology. Delgado has participated in over 100 shipwreck investigations around the world and is the author of over 200 academic articles and dozens of books. “It tells a story of fortunes, empires, and colonial ambition that carries an international, shared cultural heritage.”

“In the world of ships and treasures, there’s really no better story than La Trinité,” agrees archaeologist Chuck Meide, director of archaeological maritime research at the St. Augustine Lighthouse and Maritime Museum in Saint Augustine, Florida. Meide—a tall, broad-shouldered 48-year-old with a blond ponytail and a sunny smile—led a six-week expedition sponsored by the state and federal governments in 2014 to try to find La Trinité. The ship has fascinated him since he first heard about it in the fourth grade. “It is critical to the origin story of Florida, and thus America. It’s also the first example of a group that faced religious persecution in Europe coming to America to seek freedom. La Trinité has been on everybody’s minds for years.”

“When I viewed the videos,” recalls Floridian John de Bry, a historian specializing in maritime archaeology who was given an early peek at the footage by Pritchett, “I thought, my God, this is the most important shipwreck ever found in North America.”

La Trinité set sail for what is now Florida in 1565—a full half-century before pilgrims landed on Plymouth Rock—leading a fleet of six other ships and guided by Captain Jean Ribault, who operated under the order of King Charles IX of France. The fleet was packed with munitions, gold, silver, supplies, livestock, and nearly 1,000 soldiers, seamen, and French Huguenot colonists—Protestants seeking religious freedom. The goal was to replenish France’s Fort Caroline, on the northeast coast of Florida, and grab a foothold in America—much of which Spain had already claimed. Within weeks of the fleet’s departure, the Spanish king sent his own captain, Pedro Menéndez de Avilés, along with five Spanish ships, to intercept the French. He ordered Menéndez to drive out the French with “fire and blood.”

The French arrived before the Spanish could catch up, but La Trinité and three of the other French ships were wrecked in a storm. Emboldened, Menéndez led his men on a march through swampy wetlands to launch a surprise attack on Fort Caroline. Over 100 French perished. Not long after, hundreds more who refused to convert to Catholicism fell to the sword of Menéndez, in an attack so brutal that the area is still called Matanzas (Slaughter) Inlet.

Menéndez founded Saint Augustine, today the oldest city in the United States. Spain now definitively controlled a huge chunk of the country—La Florida, which contained present-day Florida plus parts of Georgia, Alabama, Mississippi, South Carolina, and southeastern Louisiana. The Spanish almost immediately began building new forts up and down the coast, as far north as the Carolinas. Though Spain suffered some losses over the years, it remained in control of La Florida (aside from a brief intercession by the British) until 1821 when the United States assumed control. Americans tend to think of themselves as a British colony that won freedom in 1776, but the country was first a Spanish colony and Menéndez a founding father about whom one scholar declared: “Spain owed him a monument; History, a book; and the Muses, a poem.”

The tides of history, untold wealth, clashing religious beliefs, a battle over the United States of America—what find could be richer? Back then, says Delgado, “we were on the brink of what would become a global society. It was a time when the movement of a ship could change the world.” La Trinité, by sinking, did just that.

In June 2016, shortly after Pritchett made the announcement about his discovery, Florida began to confer with France. “This is an unusual, and potentially precedent setting situation,” Timothy Parsons, historic preservation officer at the Florida Department of State, wrote in a letter to Pritchett on June 8. On June 20, he wrote again: “As you’ve pointed out, if these sites belong to Ribault’s fleet they could be extremely significant to the history of Florida, and France. With that in mind, we are doing our diligence to reach out to the French government for input. We are also considering implications related to the Sunken Military Craft Act.”

The Sunken Military Craft Act of 2004, a U.S. federal act, protects any vessel that was on a military mission, allowing the originating country to claim their ship even centuries later. By November 2017, France had officially claimed ownership of the artifacts in the admiralty division of the U.S. district court in Orlando. Florida supported that claim. Pritchett, in turn, contended that nobody had yet proven the artifacts belonged to La Trinité, and that evidence suggested the ship might actually lie about 145 kilometers north, near where Chuck Meide had looked. Over time, Pritchett came to believe that the artifacts might belong to a Spanish vessel that had stolen the French cannons and column. In the summer of 2018, two long years after Pritchett’s discovery, the federal district court concluded that the remains were indeed those of La Trinité and ruled in favor of France. The standard agreement between Florida and salvors—where the salvor reaps 80 percent of the profits from a find and the state takes 20 percent—was dismissed. In December 2018, the State of Florida and the Republic of France announced they had signed a declaration of intent to “embark on a historic partnership to research and preserve the Trinité shipwreck.” They are still working out the details.