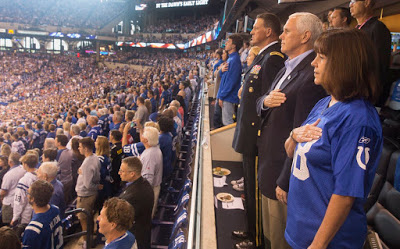 Facebook
Twitter
Pinterest
WhatsApp
Life is full of Choices. The Colts didn’t disrespect the nation but the 49ers, did. (They’re a San Francisco team from a sanctuary state. It’s what they do.) Vice President Pence, his wife and his Secret Service detail left the game.

Shortly thereafter, Mr. Pence said in a tweet that, “I left today’s Colts game because President Trump and I will not dignify any event that disrespects our soldiers, our Flag, or our National Anthem.”

“At a time when so many Americans are inspiring our nation with their courage, resolve, and resilience, now more than ever, we should rally around our Flag and everything that unites us. While everyone is entitled to their own opinions, I don’t think it’s too much to ask NFL players to respect the Flag and our National Anthem.”

The former Indiana governor, Mr. Pence added, “I stand with President Trump, I stand with our soldiers, and I will always stand for our Flag and our National Anthem.”

I applaud Vice President Pence for his integrity and for sticking to his values.

You’ll note that everyone stood for the National Anthem except for a few a few multi-millionaires from San Francisco.
Life offers us only two things – time and the choice of how to spend it.
Choose Wisely