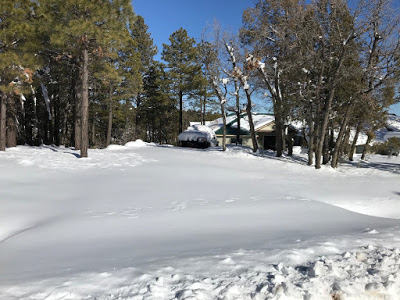 
There isn’t any mining activity going on. But the process of digging-in is underway.

We received a LOT less snow than Payson (4′) or Flagstaff (5′), and I was happy to see that. The drifting isn’t problematic either.  The location is in a bit of a cove on the east side of a ridge and the storms come from the west, usually depositing a bit more snow on the other side.
This is officially record breaking snowfall – the highest on record for Flagstaff, surpassing the previous record, set in 1915.
And still the progressives say that it’s proof positive of global warming. I have no idea how you square the two, but Socialists use ‘new math’ in everything they do where two-plus-two doesn’t necessarily equal four. 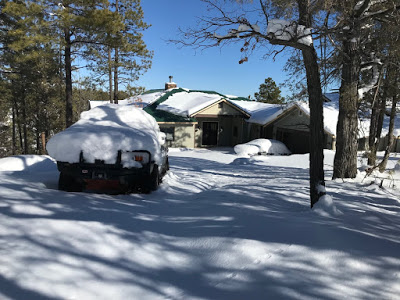 The snow meant that the painters only worked for two days last week. So the finish work grinds exceeding slow. There’s also a lot of finish carpentry that needs to be done and there’s also a hold on that. True, at their homes, they dealt with 4 or 5 feet of snow. (I know, Odie, there is a lot more snow at Tahoe, but this is Arizona and the mindset here is that 6″ of snow is quite a bit) There was 9″ of snow in Scottsdale, and that got their attention “down in the valley”.
Last year, we received 6″ of snow total at the White Wolf Mine – back when there was global warming. 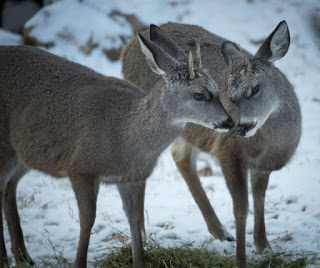 The two white tail deer yearling bucks, Joey and Elmer are still in the area along with their mom. I haven’t seen them yet, but there are little white tail hoof prints all over the area in front of the house. It means that the lions didn’t get them – yet.
I have work back in SoCal this coming week, but won’t be doing a quick turn-around. That’s what tele-conferencing is for.
Finding balance in life is something that I’m working toward. It’s not easy. It may not be possible. But it’s worth the effort. And that’s the sermonette. Worth the effort.