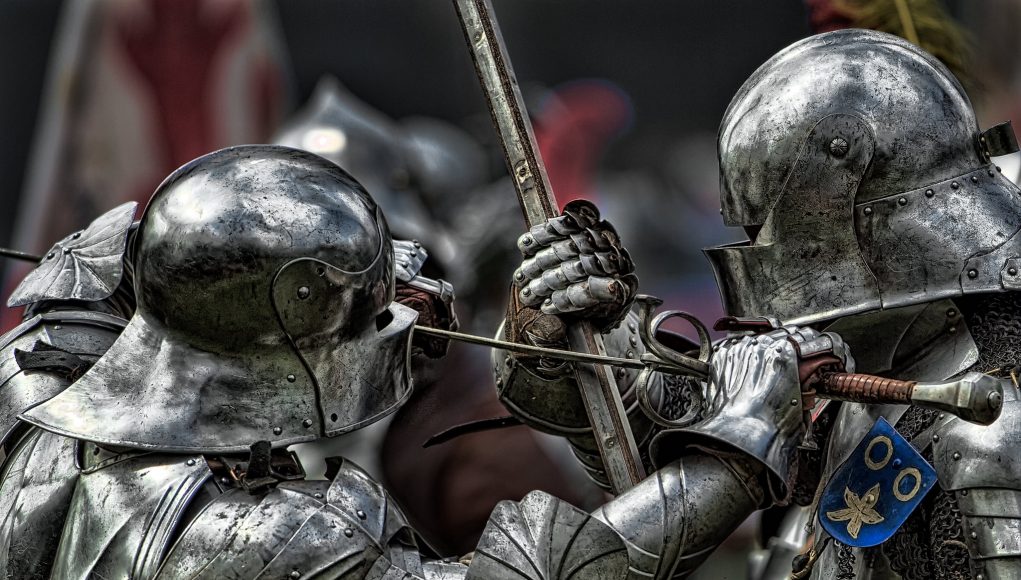 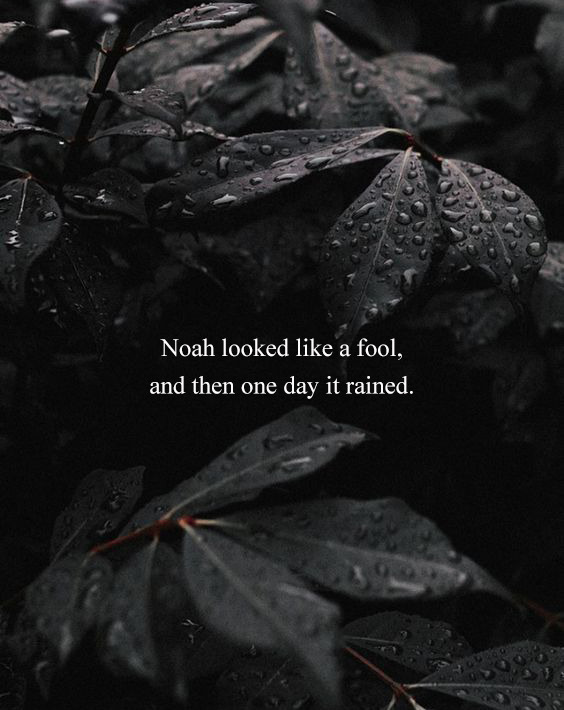 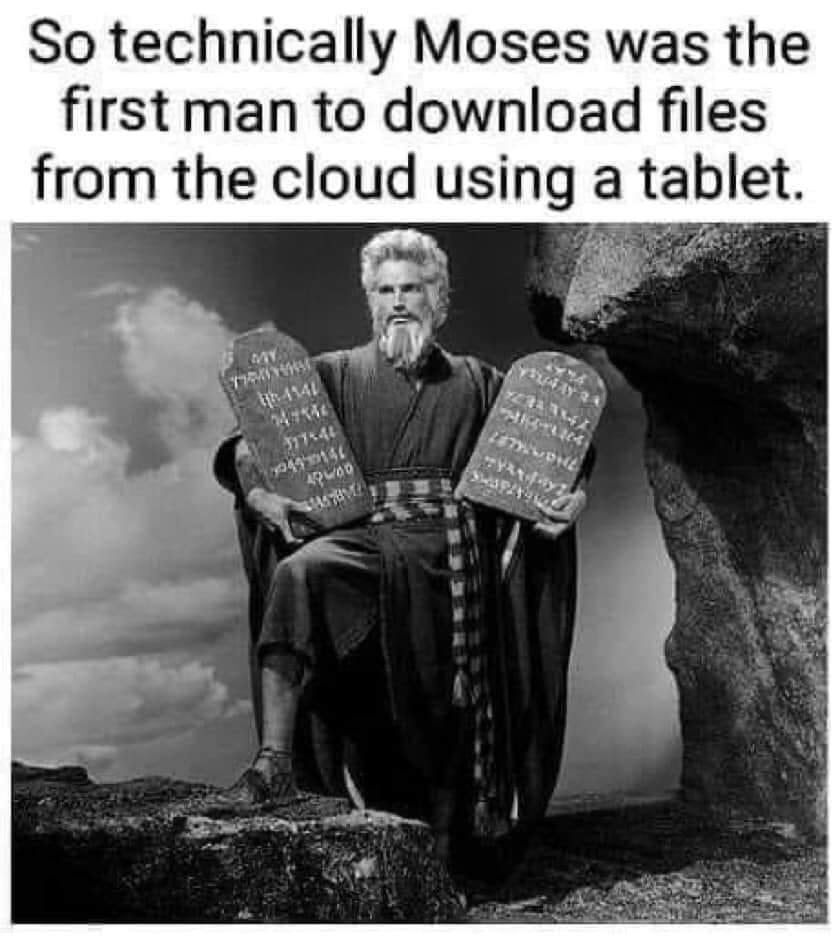 The Battle of Nancy

If the buckles were in the back, the bevor would sit better… 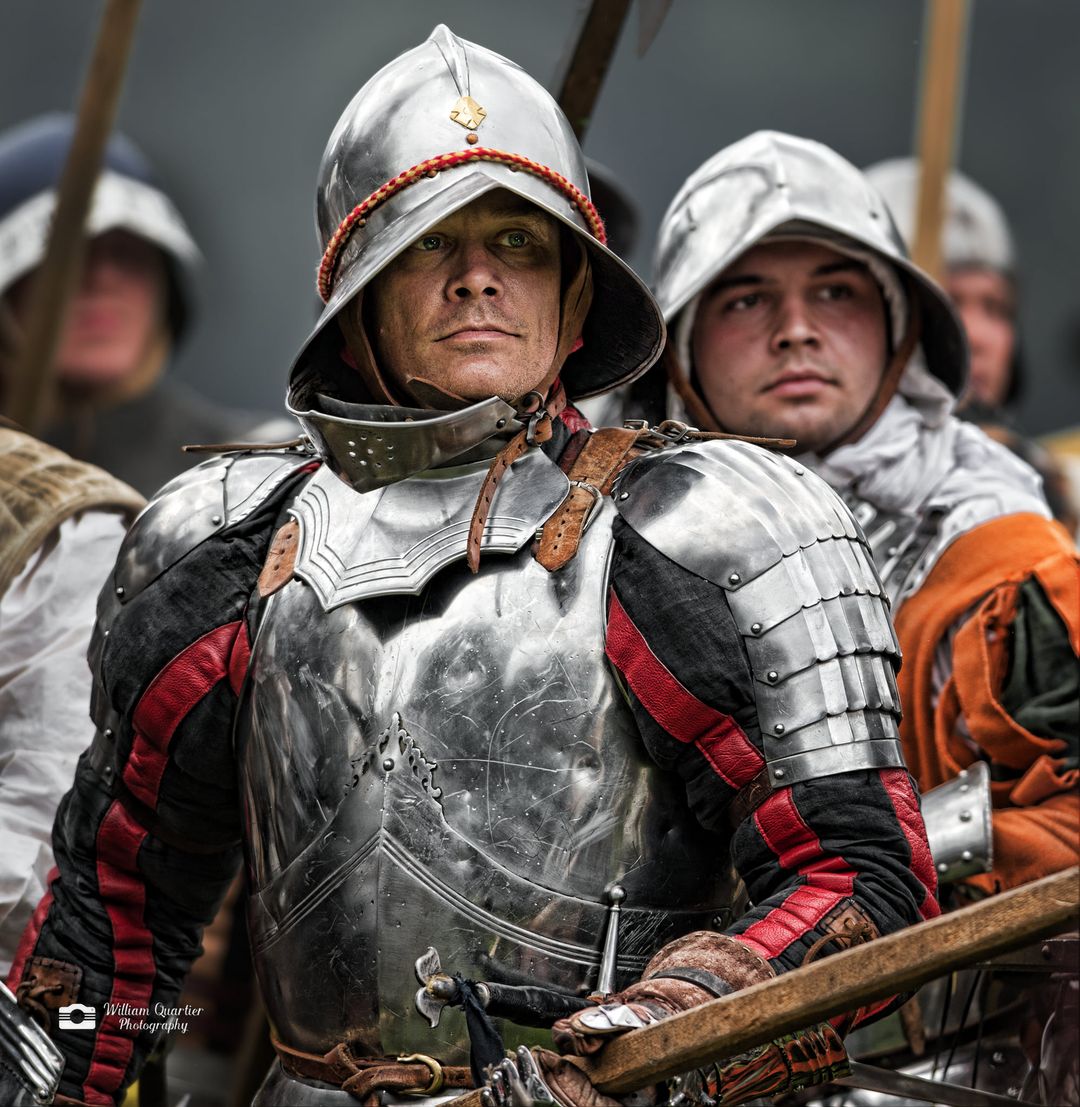 The battle at Nancy was a meeting of the armies of Burgundy, led by Charles the Bold, laying siege to the city of Nancy, and the armies of Switzerland and Lorraine, led by René II, Duke of Lorraine. 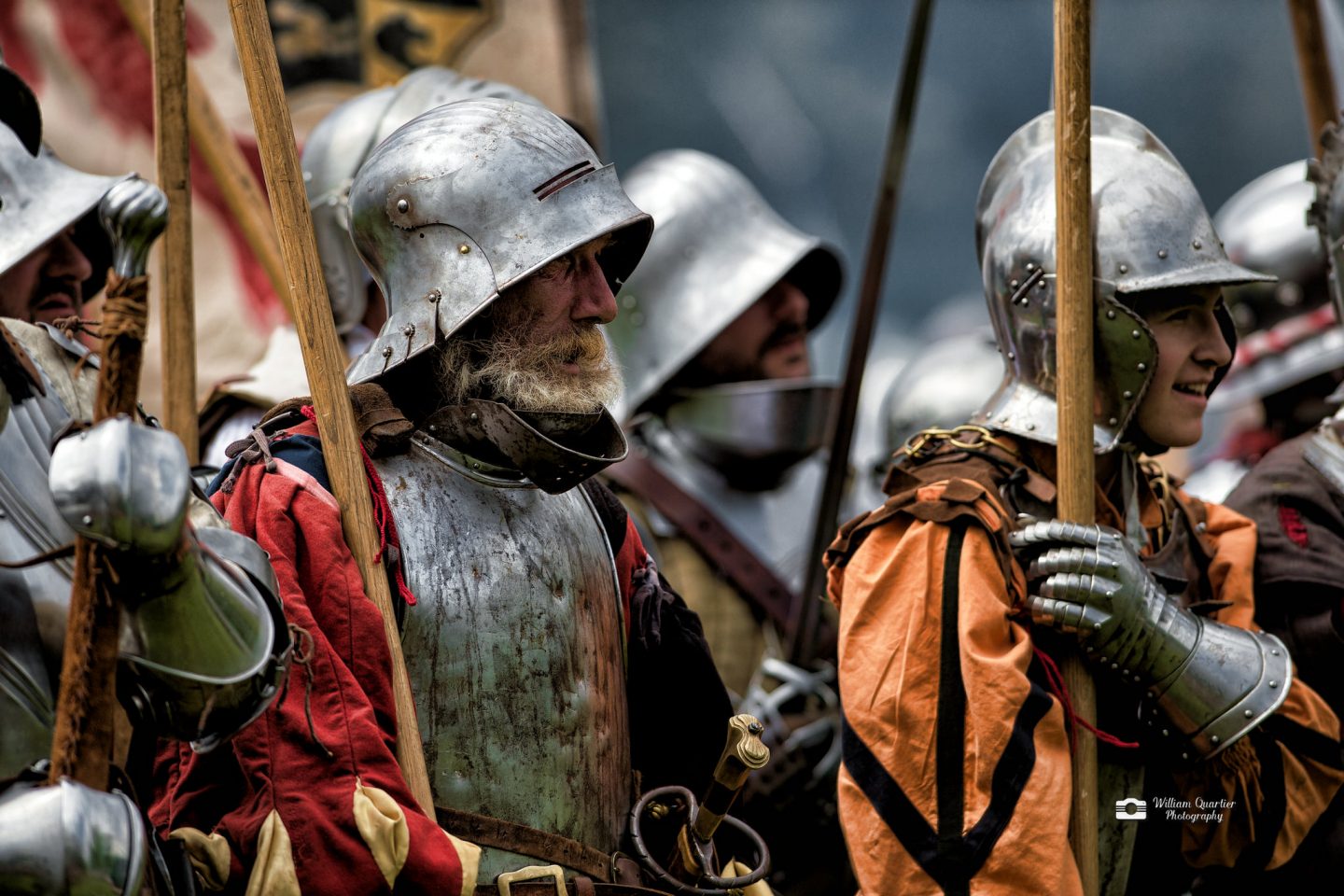 January 5th, 1477, Charles the Bold died in battle during an icy cold night at the battle of Nancy. His body, submerged in a swamp, was found only days later, half-eaten by wolves. His death was a dramatic turning point – the Burgundian dream was at an end. His daughter, Maria of Burgundy, inherited a huge empire but not the trust and support of the Flemish cities. 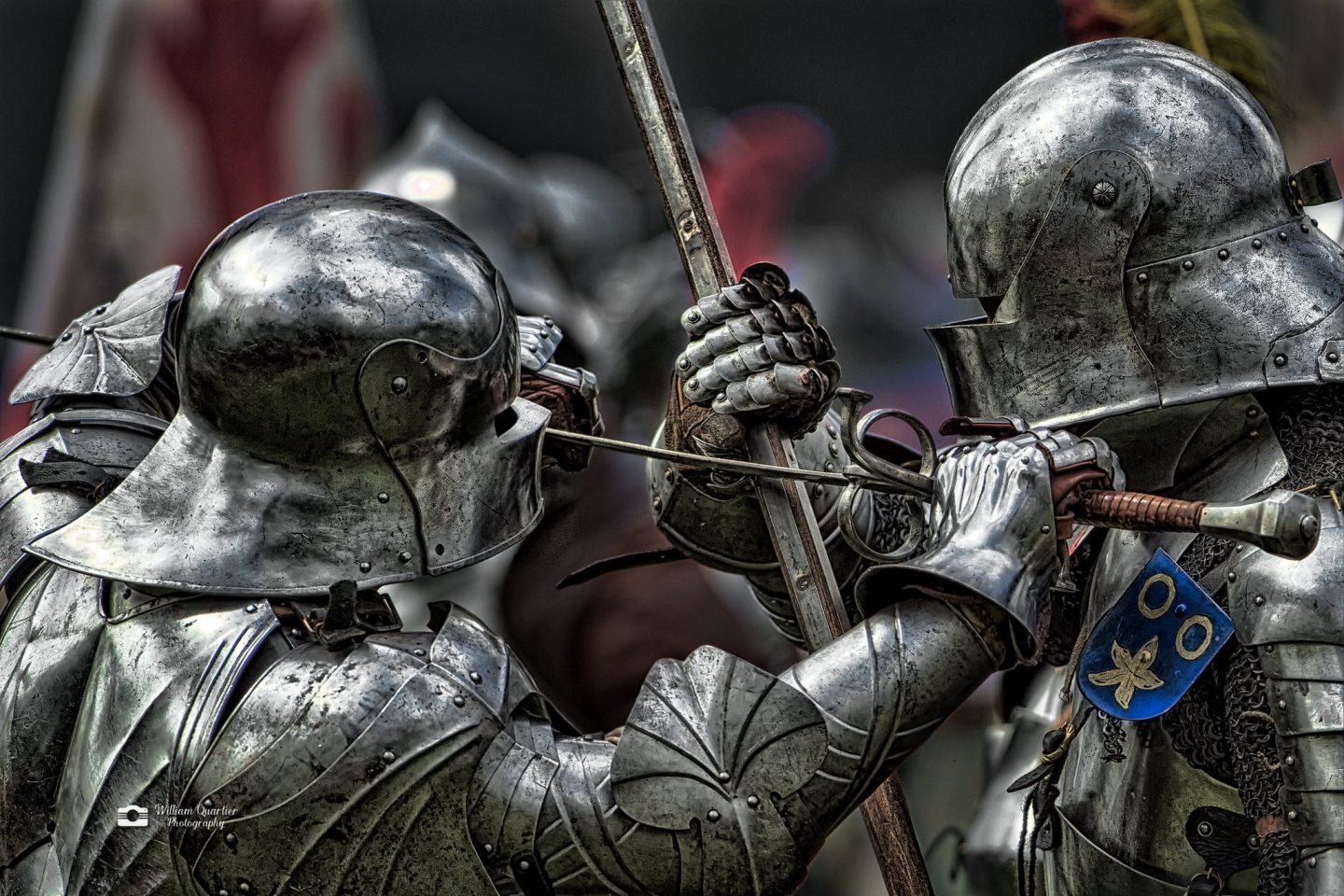 Bruges en Ghent saw an opportunity to regain lost privileges en raised a rebellion. It didn’t take long before Antwerp followed suit. In an attempt to quell this rebellion as soon as possible, wealthy Burgundy sent a huge professional army in an attempt to force the rebellious Antwerp citizens back into submission… 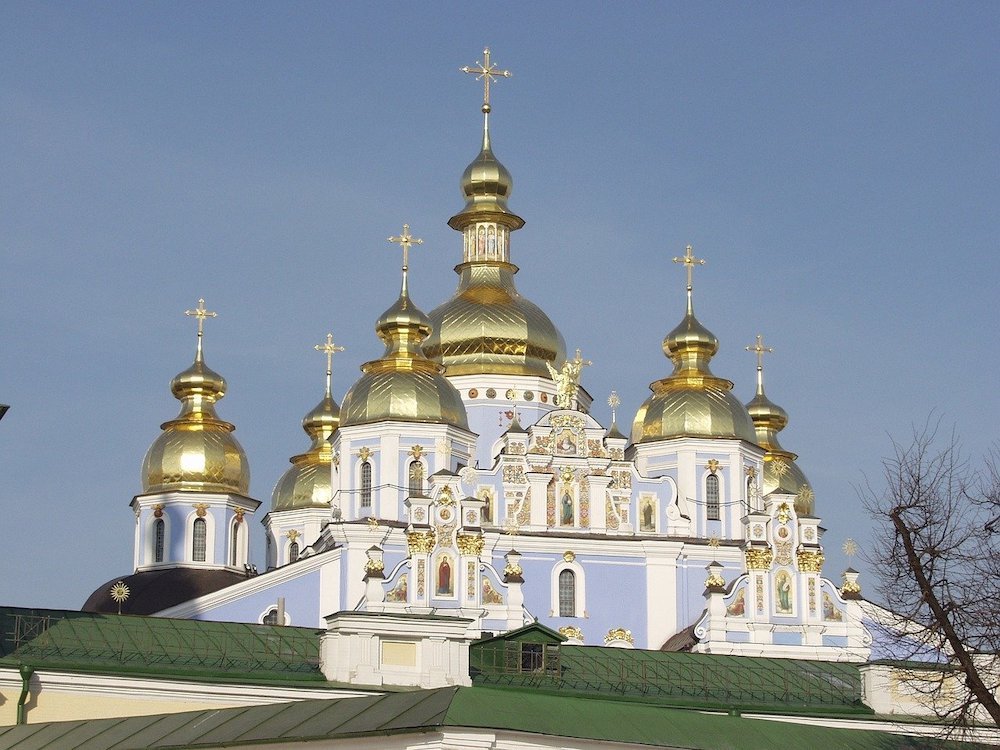 Stolen from LSP – lifted shamelessly from his blog:

As Patriarch Kirill of Moscow, the head of the ROC, explained in early 2019, “Ukraine is not on the periphery of our church. We call Kiev ‘the mother of all Russian cities.’ For us, Kiev is what Jerusalem is for many. Russian Orthodoxy began there, so under no circumstances can we abandon this historical and spiritual relationship. The whole unity of our Local Church is based on these spiritual ties.”

What spurred Patriarch Kirill to make that statement was the separation of much of the Ukrainian Orthodox Church from Russia in early 2019 with the creation of the Orthodox Church of Ukraine, with go-ahead from the Ecumenical Patriarch in Constantinople (i.e., Istanbul: who is the not-a-pope of world Orthodoxy, where national churches are self-governing). This involved the transfer of thousands of parishes and millions of believers from the long-existing Ukrainian Orthodox Church of the Moscow Patriarchate, which has been under the ROC since the seventeenth century, to the brand-new OCU. The UOC-MP is self-governing under Moscow and there wasn’t much spiritual demand in Ukraine for independence from Russia, what Orthodox term autocephaly. 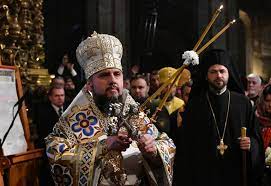 However, the pressures of the not-quite-frozen conflict with Russia after 2015 made church issues a political football, and Ukraine’s then-President Petro Poroshenko made autocephaly his pet project, with backing from Ukrainian nationalists, who found it offensive that the UOC remained under Moscow, where the church is a vehicle for Putinism, Russian nationalism, and anti-Ukrainian aggression. Advocates of the new OCU had a valid point there, and they were also correct that, since autocephaly is the norm in the Orthodox world, why didn’t Ukraine have its own, fully independent national church?

The answer there, that Orthodoxy tends to move on “Orthodox time” which appears glacially slow to secular minds, thinking more in terms of centuries than years or even decades, was unedifying to advocates of the OCU, who got their wish in early January 2019, when the Ecumenical Patriarch granted autocephaly to Ukraine’s new national church. What followed was predictably messy and politicized, with fights across Ukraine over parishes and clergy. This issue is neither simple nor clear-cut: the OCU is considered broadly nationalist (with exceptions) while the UOC, despite its Russian connections, has many laypeople who are Ukrainian patriots who don’t feel they belong to a “foreign” church. Moreover, this issue birthed a schism in global Orthodoxy that has reverberated on several continents, most recently in Africa. The OCU-UOC split has even caused heartburn among American Orthodox believers.

Above all, the schism rendered Moscow white-hot with rage. The ROC viewed this as a direct attack on its “canonical territory” and on world Orthodoxy itself. The Kremlin, too, made no effort to conceal its outrage here. Russian Foreign Minister Sergei Lavrov quickly denounced the Ecumenical Patriarch as Washington’s puppet: “His mission, obviously, is being prepared by the Americans and they do not hide that they are actively cooperating with him, using the slogan of ‘freedom of religion and belief’…Bartholomew’s mission, obviously, is to bury the influence of Orthodoxy in the modern world.” A few weeks later, Lavrov added fuel to the fire by castigating the OCU as “this travesty of history, and pursuing the objective of sowing discord between Russia and Ukraine in addition to preventing our peoples from being friends are essentially a crime [by the current Ukrainian regime] against their citizens.” A few months after that, Lavrov reiterated that this tragedy was all America’s fault: the ROC “is currently under tremendous pressure from a number of Western countries, primarily the United States, which set itself the goal of destroying the unity of world Orthodox Christianity.”

It’s an article of faith in the Kremlin that the creation of the OCU is an American project designed to destroy world Orthodoxy and harm Russia. It’s painful for me to state this but the Russians have good reason to think this. Unlike absurd Kremlin propaganda lines about “Ukrainian Nazis” perpetrating “genocide” against Russians, the idea that Washington wanted the split of Orthodoxy in Ukraine is a reasonable inference upon examination of recent U.S. Government conduct. What’s the evidence?

Our Kyiv embassy congratulated the OCU for its birth and the selection of its first primate, then the State Department in Washington amplified the same. Celebrating Constantinople’s grant of autocephaly, then-Secretary of State Mike Pompeo hailed it as a “historic achievement for Ukraine” which represented America’s “strong support for religious freedom.” Pompeo’s statement left no doubt about America’s backing the OCU against the UOC. Pompeo’s position in the worldwide Orthodox schism was made clear by his subsequent meeting with the Ecumenical Patriarch, whom the Secretary of State hailed as “a key partner as we continue to champion religious freedom around the globe.” Neither was this a partisan project since the position of the Biden administration on this issue is identical to its predecessor’s. Four months ago, Secretary of State Anthony Blinken also met with the Ecumenical Patriarch, reaffirming U.S. commitment to religious freedom, which in Moscow unsurprisingly looked like support for the OCU.

Since very few Americans, and functionally no non-Orthodox ones, noticed any of this, it’s worth asking why the State Department felt compelled to take a public position on any of this. Does Foggy Bottom side with Sunni or Shia? What about Lutheranism versus Methodism? Who in Washington thought it was a good idea to throw its weight behind the OCU since anybody who knew anything about Putinism and its religious-civilizational mission had to be aware that such statements were guaranteed to raise Moscow’s ire.

That ire has now taken the form of airstrikes, missile barrages, and advancing tank battalions. Just last month, Lavrov restated his government’s position that the United States stands behind the “current crisis in Orthodoxy.” As he explained without any word-mincing, Washington caused “the most serious dispute in the entire Orthodox world,” adding, “The United States of America had an immediate hand in the current crisis in Orthodoxy. They created a special mechanism, a special agency for the freedom of religious confession, which actually is not dealing with freedom but most actively set up and financed Patriarch of Constantinople Bartholomew so that he conducted a device for schism, particularly in Ukraine, in the first place, for creating there the schismatic, uncanonical Orthodox Church of Ukraine.”

We should not indulge Muscovite conspiracy theories nor countenance Russian aggression. However, the facts are plain enough. Simply put, by recognizing the OCU and hailing its creation, Washington changed the Kremlin’s game in Ukraine, making Putin’s long-term plans for his neighbor untenable. Without a united Orthodox Church across the former lands of Rus, answering to Moscow, the “Russian World” concept falls apart. Every secular geostrategic challenge cited as a reason for Putin’s aggression – NATO expansion, Western military moves, oil and gas politics – existed in 2014, yet Putin then chose to limit his attacks on Ukraine to Crimea and the Southeast. What’s changed since then that makes his effort to subdue all Ukraine seem like a good idea in the Kremlin? The creation of an autocephalous Orthodox Church of Ukraine in 2019, with official American backing, is the difference, and Moscow believes this was all a nefarious U.S. plot to divide world Orthodoxy at Russia’s expense. Clearly, Putin has decided that reclaiming Ukraine and its capital, “the mother of Russian cities,” for Russian Orthodoxy is worth a major war. Make no mistake, this is a religious war, even if almost nobody in the West realizes it.