A prominent house of worship in Southern California was flipped — from a towering glass megachurch of a flamboyant televangelist to the new seat of the seventh-largest Roman Catholic Church diocese in the United States.

The landmark, originally named the Crystal Cathedral, hosted its first Mass in July 2019 Wednesday following a $77 million renovation by the Diocese of Orange. It’s been closed during the plague.

It had served for many years as the backdrop of the “Hour of Power,” which was once the most popular religious television program in the nation. The show’s star was the Rev. Robert H. Schuller, who started his evangelical empire at a converted drive-in movie theater and referred to the 78,000-square-foot cathedral as a “shopping center for God.” His ministry later went bankrupt.

I have attended two weddings there. I have no idea what they cost the happy couples (and their parents), but both were well off. Neither wedding survived five years. The sermonette has nothing to do with the grandeur of the location of a wedding having anything to do with its longevity.

Maybe it’s that, “all glory is fleeting.” Rev. Robert H. Schuller was viewed by Orange County and federal law enforcement, that investigated his embezzlements from the “take” or the “plate”, as a crook.

There may be some who exclaim, “But Schuller was never convicted!” That’s true. There is a difference between a thousand allegations, and proof beyond reasonable doubt to a moral certainty.

Just because there is a curtain covering the window of the whorehouse, doesn’t mean that you don’t know what’s going on inside.

(The Bee) WASHINGTON, D.C.—In a stunning miracle, congresspeople just emerged from negotiations over 2.3 trillion loaves and fishes, somehow turning the trillions of morsels of food into enough meals for just five people.

An exhausted Nancy Pelosi (D-CA) and Mitch McConnell (R-KY) held up the small basket so crowds of unemployed citizens could witness perhaps the most historic event in the history of mankind, in which countless loaves and fishes given by those same citizens were magically transformed into, like, four or five measly meals.

“This is significant,” noted a sweating Pelosi, surely weary after working nearly 40 hours per week for what must have felt like three weeks. “You won’t find anyone in history who could pull off such a biblical feat.” The representative from the utopian state of California then pulled from the basket a coupon for $5 off at Applebee’s and held it aloft before the jobless masses.

The legislators then negotiated with multiple government administrations to oversee the distribution of the basket through the crowd standing directly in front of them. Distribution of the food cost billions, according to official reports.

The lone recipients of the divine intervention—a family of five—tearfully praised their democratic representatives for taking a mere seven months to perform such a miracle. “I don’t know what to do with all of this food,” said the husband. “The government has provided my family with enough to last, I don’t know, maybe two days. Praise heavens!”

His wife, overcome with joy, added, “Wow, whichever economic theory advocating that the means of production, distribution, and exchange be owned or regulated by the community as a whole, which inevitably cedes all powers and freedoms to a bloated, inefficient, and corrupt centralized government, works way better than the dumb system in which a government allows for citizens to take control of their own lives through private ownership, personal responsibility, and providing honestly for their families.”

“Our work here is done,” said Senator McConnell as a soft glow surrounded his countenance. “Now we must go to our place of rest for a time until the needy of this country call for us again. Farewell!” The senator and other legislators were then taken up into the heavens by private jets to far off vacation destinations. 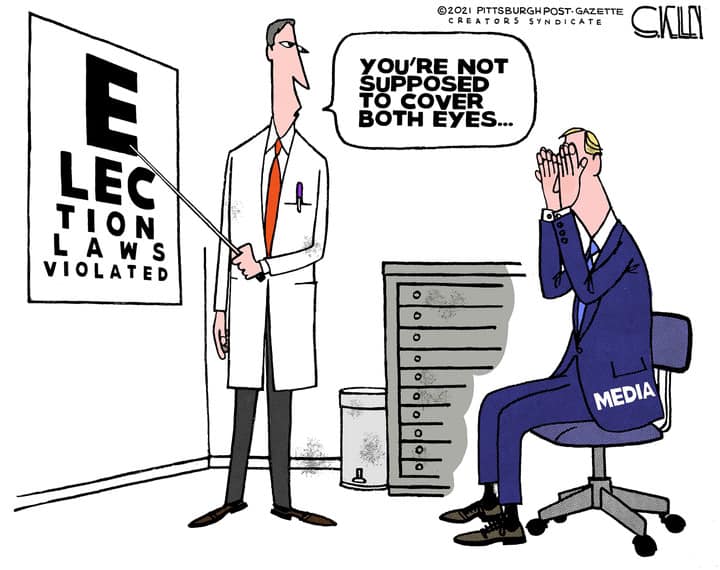