Stimulus Hoax – and thoughts on jobs 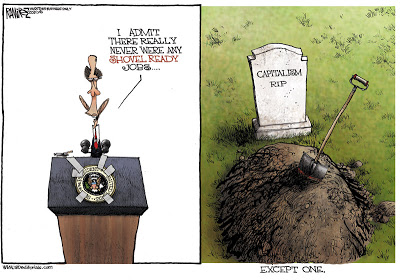 The occupation that Barack Hussein Obama seems to think was the most valuable to society is that of the  community organizer/agitator. Surprisingly enough, it is the only actual job he ever held. Many people, not just me, would consider that job one that only a parasite would take. Jessie Jackson, Al Sharpton, Barack Obama all fit comfortably into the role of social parasite. That we elected one of these human leaches president is a problem we have to live with for another two years.
The Washington Post published a disturbing interview that you might want to read for yourself. I will comment on it below. It deals with jobs, the stimulus, etc.
Some in Washington DC crow that the $800,000,000,000.00 stimulus spending saved jobs. I don’t know. Nobody knows. I do know that of the $110,000,000 spent from the stimulus bill to save jobs in the City of Los Angeles that it cost $2.2 million per minimum wage job to be either created or saved for one year. (Source: Los Angeles Times – previously discussed and sourced on this blog)

If you presume that it only costs $2.2 million dollars for government to create a minimum wage job for one year, then we come to a number of around SIX HUNDRED BILLION dollars to create the three million jobs that Obama claimed he saved. Not all of the stimulus money has been spent so one may speculate may be right, based on numbers alone…but he lied.

Only a community organizer with no grounding in reality would consider that spending $2.2 million per minimum wage job for one year is a bargain.

However, according to the Washington Post article above, Obama casually admitted that his claim last year that his stimulus spending bill would create 3.5 million “shovel-ready jobs” was not true.
Fox News played six video clips from different Obama speeches bragging that his $787 billion stimulus bill would create millions of “shovel-ready jobs.” Now, Obama admits that those things he talked about never existed.
Columnist Mark Shields commented, “How would you like to be a Democratic member of the House fighting for your life right now, getting hit over the head for having voted for the stimulus bill, and have the president say in the New York Times Sunday magazine, ‘There’s no such thing as shovel-ready projects’?”
America needs to face the truth that the stimulus is not merely a failure, it was a fake. Obama’s ramrodding of ObamaCare through Congress by peddling the narcissistic notion that we should pass it first, and then learn to love it, was a colossal failure as well. 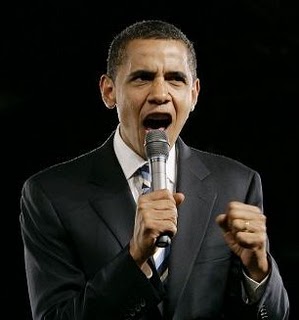 A FAILED PRESIDENT
As bad as the Jimmy Carter presidency was, Obama has consistently hit new lows, never dreamed of by Carter – who never hated America, he was just incompetent.
Obama bows to foreign dictators who hate us and apologizes for America at the United Nations. He puts down American exceptionalism. He belittles America’s generosity in saving and rebuilding other nations that ask for help after attacks or disaster. He attacks our deeply held religious values.
The American people were allowed to learn less about Obama than anyone ever elected president. We don’t even know, for example, his college grades or who paid his tuition at pricey Harvard and Columbia. The mainstream media betrayed the American people. Chris Matthews and his colleagues seemed caught up in the tingly sensation that ran up their legs.
BACK TO JOBS
It’s not easy for a private citizen to create even one job and keep it going for years. Companies run on margins that need to be anticipated if jobs are to be created. It takes years to bring a product to market and nobody really knows if a product will be successful until it actually sells. Creating a government job requires a dozen private jobs with people paying taxes to support that government worker. Will somebody please tell the president that? I don’t think he gets it. As Oscar Goodman, mayor of Las Vegas, said of Barack Hussein Obama, “He’s a very slow learner.”