The 20th century’s industrialized society has left the world permanently overcrowded, polluted and stagnant by the turn of the 21st century. In 2022 (roughly where we are now), with 40 million people living in New York City alone. Housing is dilapidated and overcrowded; homeless people fill the streets; about half are unemployed.

So far, so good. Mayor DeBlasio, himself a former Hillary Clinton campaign manager and political operative is trying to run the scenario out.

Most of the population survives on rationed food products produced by the Soylent Corporation, whose newest product is Soylent Green, a green wafer advertised to contain “high-energy plankton”.

Heston, who plays a New York City detective, learns that Soylent Green is made of people, and that’s the punch line of the movie. In 1973, anyone who’d made a movie about an America where babies are killed in vast numbers in utero at public expense would have been laughed off the stage. Nobody outside of the few surviving Nazi researchers, still on the run in ’73, would have conceived of a ruling American political class so callous as to jeer at the bodies of dead babies and to cheer on those who sold harvested organs, making a huge profit.

The California Attorney General (who plans to be the next US Senator from California) is diligently working to prosecute those stalwart souls who infiltrated Planned Parenthood and are methodically releasing video after video of outrageous conduct. Fully in defensive mode, Planned Parenthood keeps assuring the public that there was no systematic profit taking from planned organ harvests from babies that took place. Then another video that shows different people wanting a new Lamborghini paid for with baby organs surfaces, or a grizzly video of a dead 11 week old infant where they’re debating how much they’ll get from the child’s corpse and how much they want for each part. The Democratic Party’s response, and that of the mainstream media, has been predictable.
However, there will undoubtably be more videos.
Hillary Clinton and the progressive faithful are rallying around Planned Parenthood, determined to keep the doors open and the killing of babies and the organ harvesting moving forward.
What does it say of us as a people?
WARNING, the video below may be disturbing to you.
Judge Issues Restraining Order  – prohibiting the release of more of these videos… 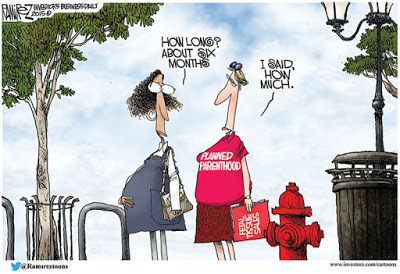