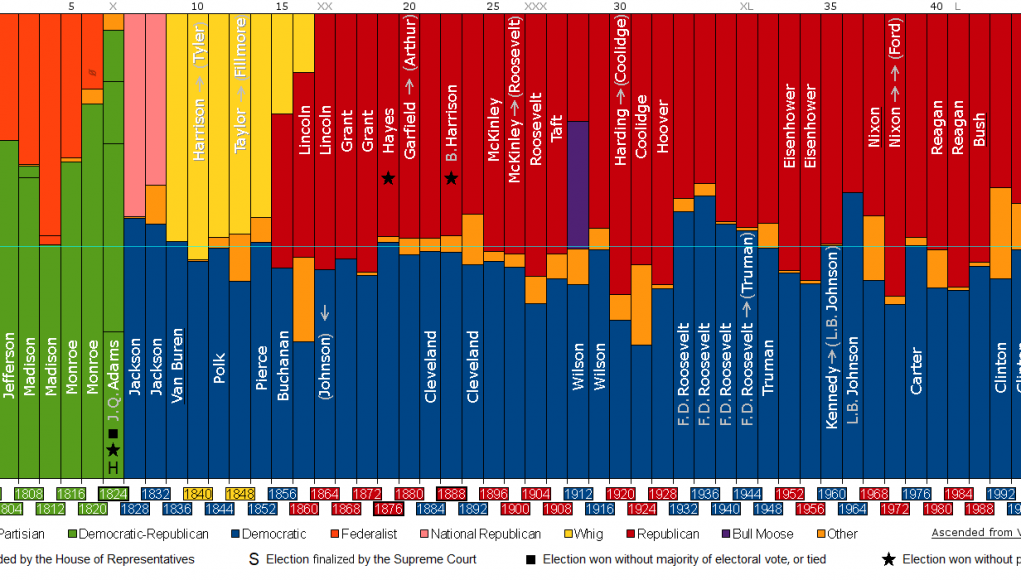 There are six political parties in America, not two. Where are YOU? Or do you wedge yourself in between (a seventh political party?) Explain yourselves. (I don’t fit in any of the six comfortably, myself)

Theory holds that these six align themselves into the two major political parties for convenience, but the grouping is not harmonious.

The elite of the Left are the Dissolute. They are idealists, concerned with ideas rather than pragmatics. These are media moguls, academicians, ACLU lawyers, and intellectuals primarily concerned with abolishing the norms of decency from society, or, rather, to alter the norms to bring them in line with a nonjudgmental, all-welcoming, but ultimately nihilist political correctness. They favor abortion and homosexual marriage. Libertarians tend to group here.

The elite of the Right are the Capitalists. Rightwing intellectuals and businessmen seek minimum government and free trade. Their primary concern is economics. They also tend to favor what is properly called the liberal institutions of rule of law, the constitution, the freedoms in the Bill of Rights. They are somewhat internationalist in flavor. Libertarians are found here also.

The yeomen of the Left are the Dependents. These include teacher’s unions and bureaucrats, farmers, trial lawyers and race hustlers, and everyone who depends on handouts from the public till, or pay-offs from class-action suits. They favor expansions of the federal government to fund their various programs, and class actions suits to force guns and cigarettes into oblivion. They are pragmatists, concerned with questions of Right Conduct, which they regard as synonymous with charity and order (which they equate with handgun disarmament and race quotas). Authoritarians are found here of the Welfare-State kind.

The yeomen of the Right are the Militarists. They favor a strong military and an aggressive foreign policy. They are anticommunist and patriotic. They do not share the internationalist feelings of the Capitalists. They are pragmatists, concerned with questions of Right Conduct, which they regard as synonymous with honor and order. Authoritarians are found here of the Law-and-Order kind.

The base of the Left are the Workingmen. These include many constituencies, such as southern Black Baptists, who do not share the social values of the Social Libertines, but they do share a suspicion of the Capitalists, in whom they see a mutual enemy. Their primary concern is economics: they want the government to regulate the market and protect the working man. These are common Joes.

The base of the Right are the Social Conservatives, the Chaste, who want to protect their families from the rising tide of filth and moral decay in which our current society is drowning. These are idealists, concerned with ideas rather than pragmatics. They want to see perversion shamed rather than lauded.

The Social Conservatives have more in common with the Workers than they do with the Capitalists, whom they also mistrust as driving the morals of society into Philistinism, but the presence of the Marxist and socialist element in the Left elite drives the Conservatives to the Right. They want the government to regulate the speech and protect the manners of society. They regard abortion as child-murder. These are common Joes.

Under this model, the reason why, for example, gay marriage has not prevailed (except via court action), even in Leftwing California, is that it is an issue that concerns only the elite of the Left, not their yeomanry, and not their base. The reason why, for example, NRA-type gun-rights issues have not prevailed (except via court action) is that this issue only concerns the yeomanry on the Right, and not their elite (who have armed guards at their beck and call) nor their base.

When it comes to abortion, the Elite on the Left support it because killing unborn babies offends normal morality; the yeomanry on the Left support it, because they see abortion as a step in favor of equality for women; the base supports it because Workers can rarely afford large families, and killing children, especially black children is a pragmatic cost saving measure. On the other hand, of the Right, only the base, the Social Conservatives, are motivated by this issue. It has no bearing on the concerns of the small-government Rightwing Libertarians, nor on the strong-military Rightwing yeomanry.

The discussion of where “you”, dear readers, fit should be interesting because we have a diverse crowd who drift past the blog from time to time.