My old, dear friend, Mike W’s comments the other day about the venerable old silenced Colt Woodsman, took me back. They were used in World War 2 and again in the SE Asia conflicts (Viet Nam, Cambodia and Laos). As Mike W points out, a shot through a target’s ear (silenced) provided the desired results for the somewhat underpowered – yet effective – .22LR.

Then there was the High Standard Company,  founded by Carl Swebilius in 1932. Swebilius, an experienced engineer and foreman, had also worked for both Marlin and Winchester. At the outbreak of the Second World War in 1939, High Standard Model B pistols began to be exported to Britain — these hand guns were the first to be modified. In 1942, the U.S. War Department purchased High Standard’s entire inventory, regardless of model, to keep up with demand new simpler and faster to produce models were developed. The Model HD became the most manufactured with 34,000 made by the end of the war.

Initially, the OSS used .22LR Colt Woodsmen paired with old suppressors made in the 1920s by the Maxim Silencer Company, but the Woodsman’s long barrel and the additional length of the suppressor were not ideal for clandestine warfare. As early as 1942, the British had adapted Model B pistols by adding an integral suppressor enclosing the entire barrel, effectively halving the weapon’s length. In 1943, the OSS requested a similar weapon. The result was the Model H-D M(ilitary)/S(ilenced) or HDM/S. The technicians at Electric Bell Laboratories developed by the new gun’s suppressor. Its manufacture was completed in secret and the guns themselves were code-named Impact Testing Machines.

I personally found that the Woodsman was more reliable than the High Standard. The HS had problems with the sears wearing prematurely and it would result in five rounds or more (suppressed) splashing out onto a target. While it did have a colorful effect, that’s not quite what you want to happen. You could fire it single-shot with the lock engaged, avoiding that problem. More on that below.

Back to the High Standard Impact Testing Machines. They were 13.8 inches in length, weighed 48 ounces unloaded, and had a 10-round magazine. Unlike stock High Standard pistols the HDM/S had a slide lock that could be used to prevent the gun from making a sound by locking its action closed, making it a near silent single-shot weapon. The barrel was ported with four rows of eight (later 11) holes. From these holes the propellant gases from the fired cartridge escaped into a zinc-plated bronze mesh, which acted as a heat sink that slowed the gases exit from the muzzle. Closer to the muzzle, a second chamber was filled with bronze wire screens further slowing the exit of the gases.

The OSS filled the second chamber with liquids such as water, oil, or even shaving cream and sealed the muzzle with tape. This maximized the efficiency of the suppressor and the only sound heard when the pistol was fired was the mechanical function of the action. The suppressor could reduce the pistols report to as little as 20 decibels — about as quiet as a person whispering. The mesh and wire screens would last for up to 200 rounds before they needed to be replaced.

During the Vietnam War, the .22LR suppressed High Standard pistols were used by the Studies and Observations Group, CIA, Army and Navy Special Forces. Along with the Colt Woodsman, they were one of a range of suppressed weapons deployed and found use assassinating enemy officers and Communist Chinese observers, during snatch raids to capture high-ranking prisoners and in shallow penetration raids into Laos and Cambodia. Perhaps the highest-value target killed by a High Standard pistol was a North Vietnamese People’s Minister of Mobilization, shot in a crowded Hanoi square — the operative who shot him escaped unheard and undetected.

In 1967, they underwent a retrofit to use a new suppressor developed by Frankford Arsenal, however, these proved less efficient and more bulky than the original Bell Labs design.

1967 was also the year that the US Navy began to send Smith and Wesson Model 39 semi-automatic pistols to Viet Nam for the use of SEAL Teams. The Navy had a supply of 9mm ball ammunition that was used in the Karl Gustav (Swedish K) SMG, and that was used in the Model 39, which when silenced with the Mk 3 suppressor, became the Mk 22 Hush Puppy. As with its predecessors, it had a slide lock to allow it to be fired single-shot (far more silently than if the slide racked and ejected brass).

The cans on the Hush Puppy needed new internals about every twenty rounds because the seals just didn’t last, and higher sights had to be installed to see over the silencer, and they’d hang up on things at times. BUT all in all, the Hush Puppy was an improvement in the power of a silenced pistol over its predecessors which were chambered for .22 LR. 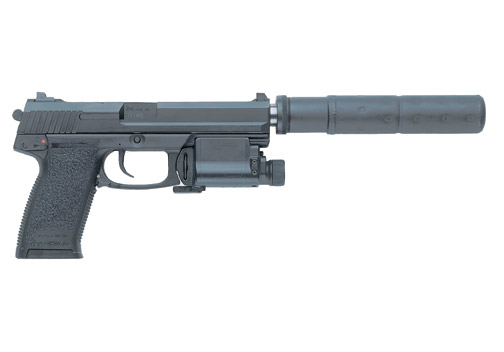 The H&K Mk 23, still in US Navy inventory, is a larger and heavier pistol, chambered for .45 ACP, that was originally issued in 1991 and did not have a slide lock. Other, subsequent entries into the silenced handgun world followed (lighter weight) and the details of those weapons and how they have been employed, including specifics on subsonic ammunition, remains classified. All classification notwithstanding, the basics remain the same.