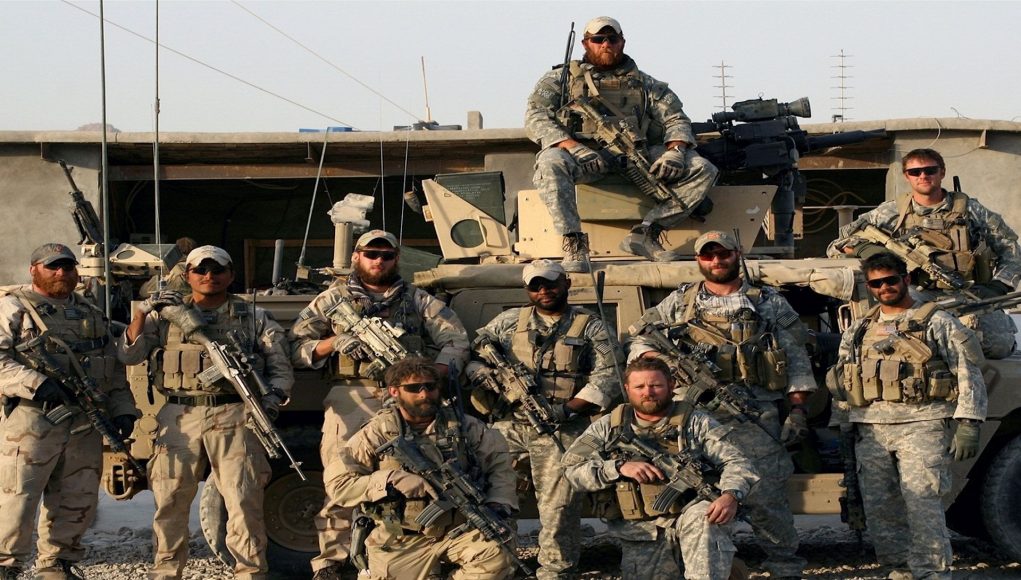 Today, General Dynamics, Textron and Sig Sauer are creating/have created potential replacements for the M-4, firing the 6.8 SPC round.

The 6.8 SPC is superior in all respects to the venerable 5.56 mm, which I was never particularly fond of. Don’t get me wrong, I own rifles that shoot the 5.56 mm (.223 caliber) round and I like them, but frankly, it was never the right cartridge for military applications – with no apologies to the Army Chiefs of Ordnance.

For the historical record (we’re headed back there again), the US Navy SEAL teams never abandoned the venerable M-14

The Team Eight guy, pictured left, was involved in a ship boarding in the Gulf circa 1991. I was in the Gulf then with SEAL Team Five, but the Team Eight guys were operating out of Half Moon Bay and I was at Ras Al Mishab.  Not that any of that matters. The point is that the teams have been using the M-14’s because the 7.62 NATO cartridge packs more punch than the 5.56 NATO. Not everyone loads out with M-14’s but they’re an option and are in inventory.

In 2000, the Navy SEALS through their parent command at JSOC, convinced the machine to produce the Mk 14 Enhanced Battle Rifle (EBR), chambered for 7.62X51. Once the Navy broke the ice everyone else (USAF, US Army, USMC, and USCG) ordered variants of the Mk 14, which is a lot lighter and more svelt than the one the SEAL operator is shown holding (above/left).

No, dear readers, I’m not suggesting that USGOV go to a MK 14 rifle. I simply suggest that the 5.56mm was recognized as inferior for a long time among the point-of-the-spear types. And you don’t shoot most weapons full-rock in combat unless you have a supply train with lots of ammo behind you. Semi-auto is fine if you want to kill things. SMG’s can fire double taps in close range environments and that works well in CQB, and if you are using a SAW or M-60, you can fire five round bursts.

Anyway, things are changing and the military is transitioning to the 6.8 SPC. I’m looking forward to seeing what comes out of the R&D process.  USGOV has had a lot of war fighting experience over the past thirty years, and hopefully the lessons have been learned.