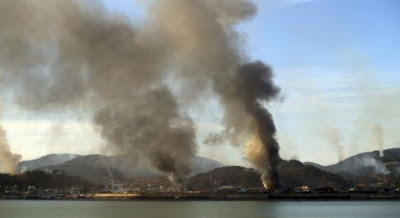 Aftermath of the North Korean attack on South Korea two days ago. (Reuters)
Many South Koreans are urging their government to take a tough stand against their rogue Communist Cousins to the north. (LINK TO YAHOO NEWS)

The move came as President Lee Myung-bak vowed to send more troops to the front-line South Korean island and as residents tried to salvage belongings from the blackened wreckage of their homes. Pyongyang warned of additional attacks if provoked.

Hours before Defense Minister Kim Tae-young’s resignation, lawmakers had lashed out at the government, claiming officials were unprepared for Tuesday’s attack and that the military response to the North’s barrage was too slow. Even those in Lee’s ruling party demanded Kim’s dismissal as well as those of military leaders and some presidential aides.

South Korean President Lee accepted Kim’s resignation and a new defense chief will be announced Friday. Watch for a salty old military hawk to take that position. The South Korean public wants to see this North Korean aggression end. First the North Koreans torpedoed** and sank a South Korean Navy ship with a great loss of life (LINK to LA Times) and now they launch an attack against South Korea. Think of a spoiled child that doesn’t get it’s way and you will have a sense of WHY the North Koreans are doing this. North Koreans starve to death and the winter is coming. The US is not giving them free food or oil – so they lash out and try to hold other nations hostage for their continuing failures to govern effectively.
Expect a South Korean military reaction if the US and China are unable to reign in the failed state in the North.
** Secretary of State Hillary Rodham Clinton called the evidence “overwhelming” that the Cheonan, a South Korean warship that sank in March (2010), was hit by a North Korean torpedo. Vice President Joe Biden has cited the South Korean-led panel investigating the sinking as a model of transparency. 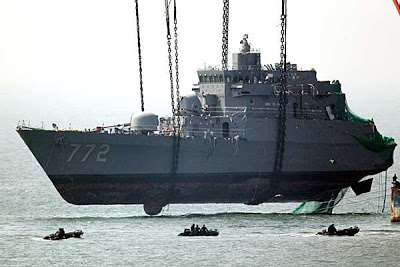 The Korean Naval Vessel Cheonan
The South Korean investigation of the sinking of the Cheonan by a North Korean submarine in March was very thorough and included raising the destroyed naval vessel. What did the world do when 46 sailors were murdered in an unprovoked attack? Nothing. What did South Korea do? Nothing. Now North Korea shells South Korea with a loss of civilian and military people and what is happening? That is the question that the public in South Korea are asking their leaders.