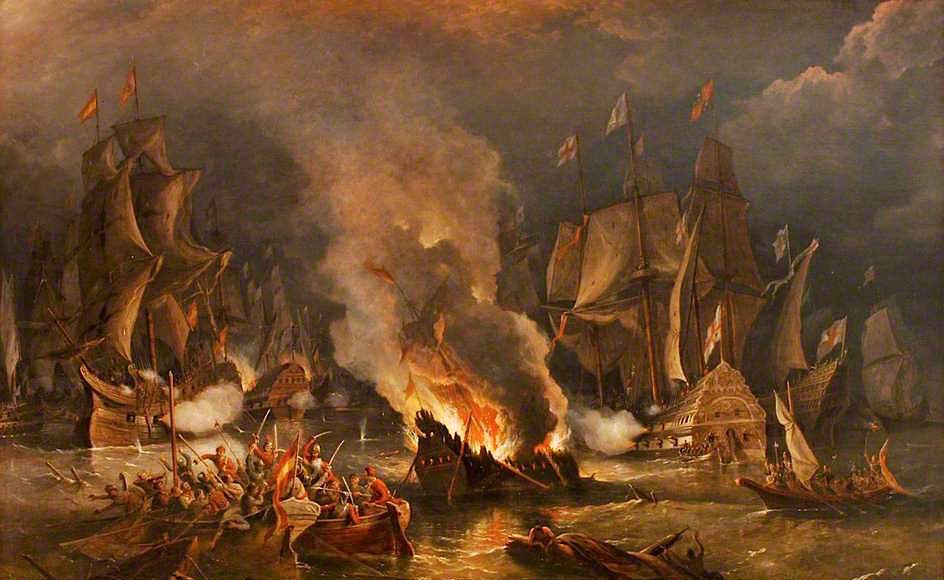 During the reign of Queen Elizabeth I (1558-1603), her Majesty was served by naval commanders who were celebrated for their courage and skill. These men have collectively been called her sea dogs. Many were related, and most hailed from England’s West Country. While all served the queen as naval commanders, they also spent much of their time in other roles, as privateers, explorers, merchants, administrators as well as slavers, and even pirates. Only one on this small list died in his bed and one was even beheaded for treason.

The archetypal sea dog, Drake was a ruthless, greedy and for a lot of people just an asshole, but also a brilliant sailor and leader. In the late 1560s, he sailed with John Hawkins, but in 1572 he led his own raiding expedition to the Caribbean where he plundered the Spanish treasure fleet.

In 1577 he embarked on a voyage to the Pacific, and after capturing a wealthy Spanish Treasure ship he returned home by circumnavigating the globe. Drake led another expedition to the Spanish Main in 1584-85, and in 1588 he commanded part of the English fleet during the Spanish Armada campaign. He returned to the Caribbean in 1595, but died the following year, while cruising off the coast of Panama, and was buried at sea.

This Yorkshireman spent 15 years as a privateer and trader, but he became increasingly obsessed with the quest for the North-West Passage. In 1574 he set out in search of this legendary sea route around the top of the North American continent, the first of three unsuccessful voyages. By their end, he was penniless and disillusioned. He accompanied Drake on his Caribbean raid in 1584-85, and then served as a commander during the Spanish Armada campaign 1588. Further voyages against the Spanish followed, until in 1595 he was injured during a skirmish at Crozon in Brittany, and died of his wounds.

A half-brother to Walter Raleigh and cousin of Richard Grenville, Gilbert was educated at Oxford and then served as a soldier in Ireland. He became obsessed with the North-West Passage and wrote a book on the subject, which encouraged Frobisher to set off in search of it. Meanwhile, Gilbert developed an interest in the colonization of America. In 1578 he and Raleigh led a reconnaissance expedition to the New World and colonize Virginia, which ended in failure. Undeterred, Gilbert led a new expedition in 1583 but never made it further than Newfoundland. His ship foundered during the voyage home, and Gilbert was lost at sea.

As a young adventurer, Grenville fought as a soldier in Continental Europe and Ireland. He then took part in Raleigh’s expedition to colonize Virginia. In the process, he attacked the Spanish shipping and plundered his way around the Azores. In 1588 he held a military command, but he returned to sea the following year, helping guard the coast against another invasion attempt. Then in 1591, he participated in an English expedition to the Azores, where the English were surprised and attacked by a larger Spanish fleet. Grenville’s ship the Revenge was surrounded, but he fought on for 15 hours, until, mortally wounded, he was forced to surrender his sinking ship. This epic sea battle was later immortalized by the poet Tennyson.

Hawkins was one of the first English sea captains to venture into the Caribbean and trade with slaves. However, in 1568 his flotilla was attacked and all destroyed by the Spanish. During the 1570s they introduced a new form of warship: the English Galleon, a vessel that was faster, more maneuverable, and better armed than its Spanish counterpart. Hawkins served as a fleet commander during the Spanish Armada campaign 1588 and the following year he led an unsuccessful attempt to intercept a Spanish treasure fleet. He next returned to sea in 1595, sharing command with Drake as the two sea dogs led another raid into the Caribbean. This was Hawkins’ last campaign, he died off Puerto Rico, aged 63.

The Battle of Flores, 1591: Sir Richard Grenville and the last fight of the Revenge

The son of John Hawkins learned his trad under Drake, participating in the Caribbean expedition of 1584-85. During the Spanish Armada campaign, he commanded the warship Swallow, and he subsequently accompanied his father during the post Armada raids on Spanish and Portuguese ports. In 1593 he began a voyage of circumnavigation. His ship Dainty raided Valparaiso in Chile but was then cornered and captured by a Spanish squadron. Hawkins spent three years in prison before his stepmother paid his ransom. He returned to sea in 1620, campaigning against the Barbary Pirates and in 1622 unlike all the others, he died in his bed.

Known as an explorer, a poet, a soldier, and a courtier as much as a sea dog, Raleigh earned an early reputation as a soldier fighting in Ireland. Inspired by his half-brother Humphrey Gilbert, he participated in the doomed New World expedition of 1578, but returned alone the following year, and founded a colony at Roanoke ( now in North Carolina).

Raleigh assisted in the defense of the English coast during 1588. He became a royal favorite, but in 1592 he was imprisoned for marrying without the queen’s permission. Three years later he led another failed expedition to South America, in search of El Dorado.

In 1596 he served alongside the Earl of Essex, the new favorite of the Queen, during a raid on Cadiz. Raleigh’s fall from grace followed swiftly after the queen’s death. King James, I accused him of conspiring against him, and Raleigh was imprisoned in the Tower of London. He spent 13 years there, where he wrote his History of the World. He was released in 1616, but when his next expedition to the Spanish Main ended in failure Raleigh was accused of inciting was against Spain. He was duly executed on the orders of the King.