Literally, this means, “Patience is the science of peace.” But it has a much better ring to it when you say it in Spanish.

In L.F. v. S.C.R.L., EU EDJ, Oct. 13, 2022), the Court of Justice of the European Communities, in a request from Belgium for a preliminary ruling, held that a private company may prohibit employees from wearing all visible signs of political, philosophical or religious belief in the workplace.  This would not constitute direct discrimination on the ground of religion or belief in violation of Council Directive 2000/78 so long as the company’s policy covers any manifestation of religious, philosophical or spiritual beliefs without distinction and treats all employees alike by requiring them in a general and undifferentiated way to dress neutrally. Such a rule might constitute indirect discrimination if it had a disparate impact on persons of one religion, but would not if it were objectively justified by a legitimate aim and the means of achieving that aim were appropriate and necessary. The question arose in the context of a company’s refusal to employ a Muslim woman as an intern because she insisted on wearing a hijab. The Court issued a press release announcing the decision. Law & Religion UK also has coverage.

“If there were a God, wouldn’t He have done something about [insert your grievance here]?”

This topic has appeared on Virtual Mirage before and for those of you who recall the discussion, feel free to gloss over it if you’d like. There are a lot of LL opinions and that’s really all they are.

One can only deduce from the evidence available that man’s existence on Earth is difficult because it’s supposed to be difficult.

“But who can endure the day of his coming? Who can stand when he appears? For he will be like a refiner’s fire or a launderer’s soap. He will sit as a refiner and purifier of silver; he will purify the Levites and refine them like gold and silver” (Malachi 3:2-3).

We are removed from the presence of God and we work out our own salvation with fear and trembling. (Paul to the Philippians, 2:12)

Suffering and brutal unfairness can seem incompatible with the reality of a kind, loving God…. (<i>Man’s Search for Meaning</i> by Viktor Frankl – on how we can cope with unavoidable suffering) This dichotomy is as old as mankind and cannot be explained in a simple sound bite or with a slogan on a bumper sticker.

Inherent in the [insert your grievance here] question is an assumption about this world and the role and nature of God in which people expect God to just do something to prevent evil in the world. If there is something I have learned many times over, it is that the hardest mental exercise is recognizing and challenging our own assumptions. Almost everyone who considers the question, “Why does God allow such terrible things like [insert your grievance here] to happen?” fails to follow that up with the question, “What is it that makes me think that God should do anything about it?”

The simplest answer to this is that God is good, good people should stop evil from happening, and God has the power to stop it. But the issue for the believer is that God is still there and loves us, but did not stop the evil. So from the perspective of a believer how should we resolve this issue?

To start I will ask a question to consider, and finding the answer will be left up to the interested reader.

The more interesting question is not, “Why does God allow evil to happen?”, but, “What is God doing to fix the evil that exists?”

When believers are faced with the problem of evil we seem to forget that God has already given us a framework to understand the problem of evil. Perhaps because we are so prone to view the story of Adam and Eve as an absolutely literal story we fail to consider the symbolic meaning of the story.

Fundamentally we find ourselves in a fallen world. The name Adam in Hebrew is literally the word for humanity. From the story of the Garden of Eden, we learn that we, all humanity, are cut off from the presence of God. We are quite literally left to ourselves. Perhaps we do not consider the full implications of that. We, humanity, are responsible for all the evil that we do. We cannot say that we live in a fallen world, cut off from the presence of God, and then expect God to actively take charge of everything that happens in the world.

The story of the fall is trying to teach us the reality of the world we live in. As believers we must confront this fact, in this world there exists both good and evil, and whether we have more good or evil depends on us. 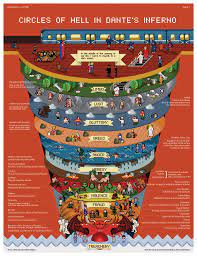 In classical Christianity, the standard view is that there is the earth, and then there are heaven and hell. The usually unspoken assumption is that Earth is the middle point of glory. In Dante’s Inferno the Earth (or at least the surface) is the dividing line between heaven and hell. However you want to balance it, we live in a “fallen” world out of the presence of God.

If you follow me, from this perspective, our current state is not that different from those who are “thrust down to hell.” There is not much below us since we have “fallen” after all and considering all the terrible depravities committed by humanity there is not much further for us to fall.

In the Old Testament, it does not mention separate places, such as heaven and hell, for the righteous and the sinners. There is only one place, sheol, where all the dead go. This means that for those who die there is no real change in their spiritual state. Thus “hell”, or spiritual separation from God, is simply a continuation after the death of our current separation from God. The judgment and resurrection bring about a division (sheep from goats, etc.)

With this context, we can return to the original question, “How can God allow evil in the world?” The simplest bumper sticker answer is, “Because this world is Hell.” With one exception there is nothing lower in glory or goodness than this world. We are the furthest we can get from God. What we do in this situation where we find ourselves matters.

This view of things should change how we view the world we live in. The amount of goodness or evil in the world depends on us. Because we are already out of the presence of God there really is nowhere else to go but up.