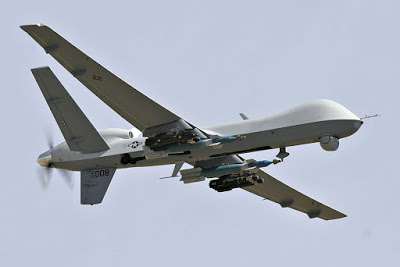 Facebook
Twitter
Pinterest
WhatsApp
Everyone tends to split hairs when it comes to matters of interest to them. Is ‘somebody’ a freedom fighter or a terrorist? Does killing people for fun and profit for political gain somehow end up with a different result than if they’re doing it as part of their business plan (profit motive)?

Last Friday, President Trump announced that he will hold off on officially designating Mexican cartels as terrorist organizations while he works with the Mexican president “to deal decisively” with the issue.

President López Obrador walks a tightrope. He was elected on the platform of hands-off drug cartels, and now if he sticks to that promise, he faces a potential invasion (if only by armed drones) of sovereign Mexico. Designating cartels as foreign terrorist organizations means that the US is expressing the intent to kill them wherever they are.  That would include removing some of Pres. Lopez-Obrador’s most ardent donors from the gene pool. Call it retroactive birth control if it makes you feel better.

Obrador praised Trump’s decision at an event Friday in his home state of Tabasco.

“I celebrate that he has taken our opinion into account,” the Mexican president said, according to The New York Times. “There has to be cooperation with respect for our sovereignties, cooperation without interventionism. And I think it was a very good decision that he took today.”

The sad reality is that the cartel structures include the WHOLE of Mexico. A terrorist designation would label all of Mexico as a terrorist state, much as Iran is today, with very tough financial sanctions. And they’re our largest trading partner. Sticky wicket. Technically, and maybe practically, it would bar financial institutions of doing ANY business with Mexico. And who would want to invade the place? (if you broke it, you bought it) Particularly where the dope that they move is in such high demand in the US?

Mexico will stage pageants (see Wag the Dog) in coming weeks and months to show that they are cracking down on cartels. The cartels who don’t pay MEXGOV enough will be targeted by Mexican light armor and troops. They will serve to assure the USA that they’re serious about curbing cartel behavior. In reality it will be business as usual.

President Trump will show the American public these pageants and will use it to assure the voting public that our largest trading partner is trying…while we keep building the wall. Politics remains what it is.

Mexico today is a financial mess. It’s not getting any better no matter what the US does or doesn’t do, but designating it as a Terror State would lead to a complete collapse. I know that there are a few readers who might applaud that. But you need to be careful in what you wish for. What would rise from the ashes in Mexico? What about the humanitarian result of twenty million (or more) trying to cross the US Border every WEEK. The cause and effect could be horrible.

The US has a tiger by the tail. We don’t want to hold on, we don’t want to let go, and shooting the tiger in the head, while satisfying, may not get us where we want to go.