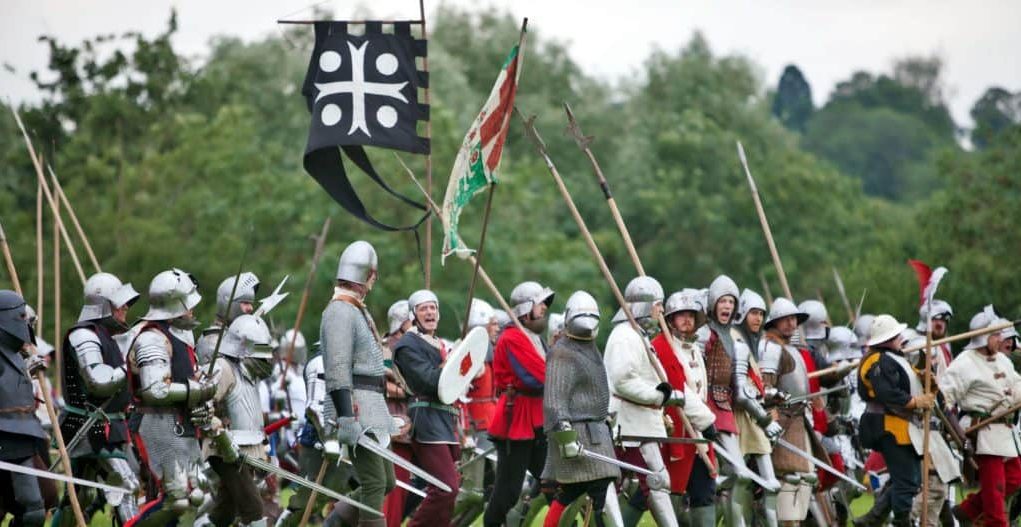 A battle on a snowy day in England.

The numbers involved were impressive for any Medieval battle: the Yorkists alone numbered 48,660 according to muster rolls; though the number that actually deployed upon the field that morning was somewhat less, with as much as a third of the Yorkists under Norfolk not yet arrived. Thus the Yorkists began the battle outnumbered; their 25,000 to 30,000 facing Somerset’s estimated between 40,000 and 60,000 Lancastrians (the latter figure almost certainly an exaggeration). 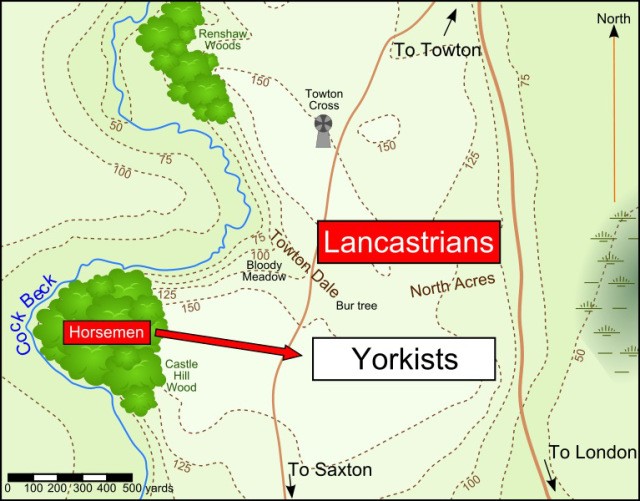 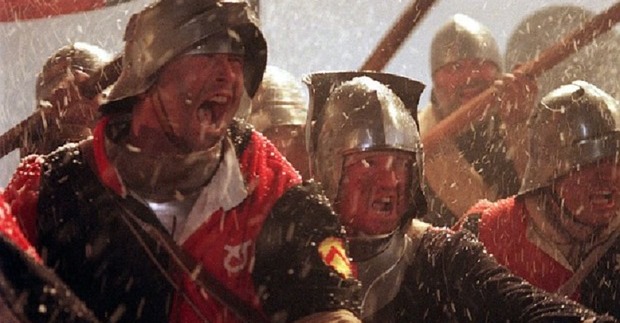 Total number of combatants likely numbered 80,000. Approximately three-quarters of the Peerage of England fought in the battle, with twenty eight Lords of the Realm present (the majority on the Lancastrian side, only eight fighting for the Yorkist cause). Skeletal remains found in a mass grave in 1996 near the battlefield showed evidence that the soldiers came from all walks of life, were on average 30 years old, and averaged 5’7″ tall, and very strongly built. Bone scaring shows that many were veterans of previous engagements 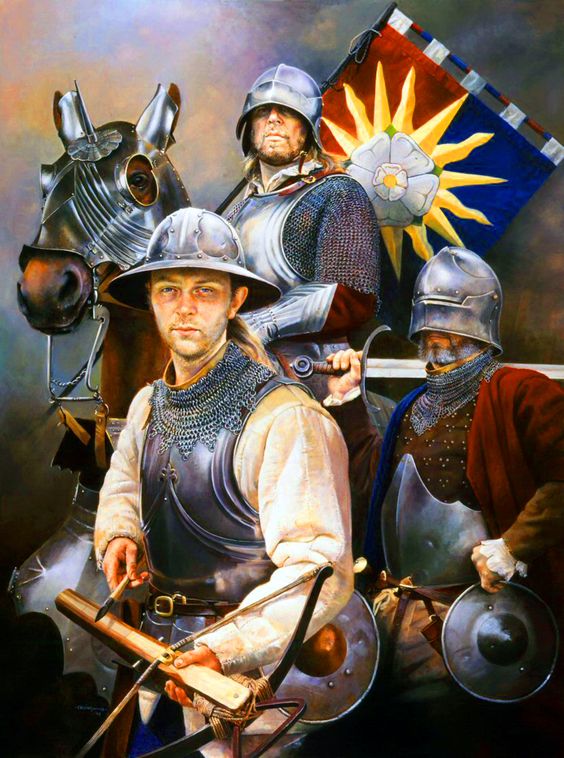 Both armies were deployed largely on foot, even the knights (men-at-arms) sending their horses to the rear. The primary tactics of the War of the Roses had armies deploy in three “battles” (divisions), each composed of archers and melee-troops. Most men wore some armor, the knights being encased in fine plate armor from head to foot. Because of the ubiquity of good armor, the primary weapon tended to be the pole axe (halberd) or heavy bill. War hammers were also popular with the chivalry. The long sword was common to all soldiers, high-born and low.

Battles (the melee) began with exchanges of arrows. The infantry then engaged at close quarters. Sometimes a reserve of cavalry would attempt flanking maneuvers; though how seldom even such elementary tactics were employed throughout the war is striking.

The Lancastrians deployed first. Somerset started the day in a strong position, on rising ground with his flanks protected where the plateau dropped off; most steeply on the western flank, where Cock Beck creek flowed in an S-shaped course around the west side of the plateau. This flank also had thick stands of woods growing up to the edge of the battlefield. Somerset took advantage of this feature to conceal a body of troops, ready to fall upon the Yorkist left once they were engaged.

The Lancastrian position was sound, and blocked the road to York. The only drawback was that the narrowness of the plateau didn’t allow the larger Lancastrian forces the opportunity to bring their numbers to bear against their enemy’s flanks. Nevertheless, Somerset (or his chief adviser, the turn-coat former Yorkist mercenary captain, Sir Andrew Trollope) was content to stand on the defensive, and force Edward to attack them in a brutal, frontal engagement.

Edward’s forces took the field after noon; deploying as the snowstorm grew in bitterness. They took up position opposite the Lancastrians, just out of bow range; low ground separating the opposing forces. Their deployment took several hours, as stragglers continued to arrive. Norfolk was nowhere in sight, and would in fact arrive many hours after the battle began. Despite his troop’s fatigue after their long march to the battlefield, and his inferiority in numbers, Edward ordered his vanguard to begin the battle.

The Yorkist cause was well served in Edward’s vanguard commander, William Neville, Lord Fauconberg. With a change of wind now blowing the snow heavily into the faces of the Lancastrians, he ordered his archers (armed with the famed English longbow) to advance to range and loose a single volley. He then ordered them to retire.

Finding themselves under fire, the Lancastrian archers returned fire. However, as the wily Fauconberg foresaw, with the snow in their eyes and the wind in their face they blindly fired volley after volley; all falling 40 yards short of the Yorkist line! They loosed until their quivers were exhausted, leaving the ground in front of the Yorkist line a porcupine quilt of spent arrows.

Drawing their heavy yew bows, they now loosed volley after volley of clothyard shafts. The wind in their favor, these fell in a deadly hail amongst the packed ranks of the Lancastrian forces. When their quivers were emptied, the archers gleaned the spent Lancastrian arrows littering the slope, and returned them to their sender!

As casualties mounted from this one-sided exchange, Somerset was goaded into leaving his strong position and advancing to the attack.

Fauconberg then recalled his archers, and though there is no clear record, it is safe to assume they continued firing over the heads of their comrades, into the melee that would soon develop.

Now came the main event, as the opposing lines clashed together in fierce and bloody close quarter combat. Edward and Warwick were everywhere, encouraging their outnumbered soldiers. The eighteen year old Edward was particularly conspicuous, 6’3″ tall and imposing in his splendid armor; the quartered leopards-and-lilies of the Plantagenet kings on his surcoat, the Sunne-in-Splendour banner waving above him. This striking young warrior-prince stood in stark contrast to his Lancastrian rival, King Henry, who was too sickly to even be on the battlefield!

As the two lines came together, a crises developed on the Yorkist left. There, the Lancastrian forces hiding in the woods above Cock Beck now sprang out and fell upon the Yorkist flank. That flank gave ground, and some began to flee in panic. Edward rushed to the threatened sector, rallying his soldiers and setting a personal example of valor in stopping the enemy’s progress.

The battle raged at close quarters for an exhausting three hours. Bodies piled so high that breaks had to be taken in order to remove the dead separating the combatants. The Lancastrians continuously threw fresh men into the fray and gradually the Yorkists were forced to give ground and retreat up the southern ridge. On their left they gave the most ground, so that the western end of the line was pushed furthest back, and the Lancastrian position now had its back to the steep slopes above the Cocks Beck creek.

At last, Norfolk arrived from the southeast, marching up the Old London Road, with the remaining Yorkist forces. These now joined the battle, pushing back the Lancastrian left. The Lancastrians fought on for a time, but momentum had clearly shifted to their opponents. Then, as happened in ancient and Medieval battles, the line suddenly gave way as men began to flee in panic.

Now the bloodbath began in earnest.

Fleeing Lancastrians were closely pursued closely by their vengeful Yorkists foes. Today, a low meadow on the western edge of the battlefield is known as Bloody Meadow in remembrance of the slaughter there.

The fleeing Lancastrians tumbled down the steep slope of the Cock Beck, into the icy creek. Here and further north at the River Wharfe at Tadcaster, panicked and exhausted men still wearing their armor, plunged forward, and falling into the water, drowned. This continued until there were enough dead to form a bridge of human corpses, across which their comrades could cross. At Tadcaster a wooden bridge broke under the weight of the armed men, plunging many into the freezing water. At these crossing points, choked with refugees, the slaughter was greatest, as the congestion allowed the pursuers to catch those attempting to cross. At Tadcaster, 2 miles to the south, other Lancastrians, trying to hide in buildings and cellars, were hunted down and killed.

Many apparently had thrown off their helmets as they ran, and the ghastly damage seen on the skulls recovered in mass graves show just what happens when poleaxe, war hammer or longsword strike naked heads. The number of wounds (one victim’s skull displays eight separate wounds) speak to the frenzy of killing that overcame the pursuing Yorkists.